Reversed-phase vs. normal-phase – how do you determine which mode to use?  In a previous post, I have addressed this topic but the basic rule-of-thumb is if the sample is soluble in polar solvents (methanol, acetonitrile, water, or is ionic), then use reversed-phase.

Though many chemists will also scout their reaction progress using normal-phase TLC, increasingly chemists are relying on HPLC-MS to ensure they have synthesized their molecule and to see what the impurity profile looks like. Many of these LC-MS methods are classified as polar, non-polar, or generic based on the synthesized compound’s functionality and/or solubility.

If a “polar” analysis method is used (say a 5% to 50% methanol or acetonitrile gradient), then a reversed-phase method should be considered for the flash purification step. But that begs the question - methanol and acetonitrile, how are they chromatographically different and when should I choose one over the other?

There are two major differences between methanol and acetonitrile…

I recently was conducting some purifications of Equal® (my preferred source of aspartame sample) and caffeine.  My initial data showed that caffeine and aspartame virtually co-eluted with the gradient I used (0-65% acetonitrile in water), Figure 1. 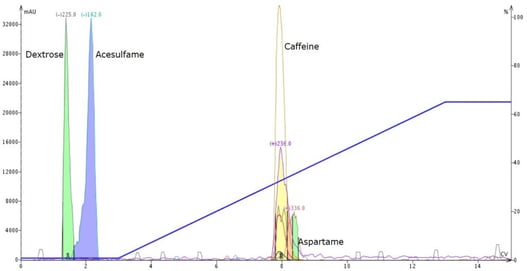 To get these compounds to separate I made my gradient shallower (a typical first choice to optimize my separations) but noticed only marginal improvement, Figure 2.

Figure 2. Reducing the gradient slope from 0-65% acetonitrile to 10-40% acetonitrile slightly improved the separation of caffeine and aspartame.

So, in an attempt to further improve the separation, I replaced acetonitrile with methanol and noticed a change in elution order - aspartame now eluted before caffeine, Figure 3. 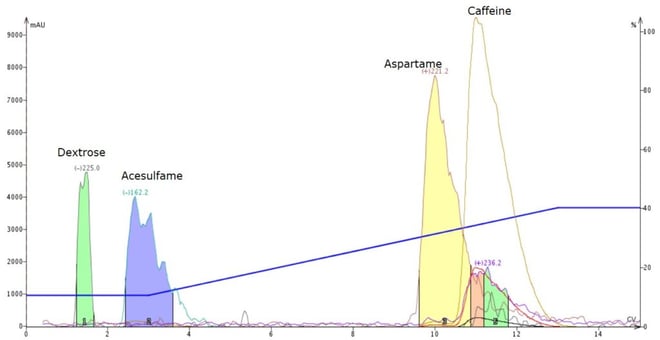 Figure 3. Separation of caffeine-spiked Equal using a water-methanol gradient shows a change in the caffeine-aspartame elution order, greatly improving their separation. As an added bonus, dextrose and acesulfame are also better resolved.

So, what have I learned? Well, it has taught me that organic solvent choice is as important in reversed-phase as it is in normal-phase so when developing a reversed-phase purification method, evaluate both methanol and acetonitrile on your HPLC to see which performs the separation better.  Then use that method for your flash chromatography.

For more information on solvent strength and selectivity classes I recommend Snyder and Kirkland's Introduction to Modern Liquid Chromatography or the information included at sanderkok.com.