How does reversed-phase flash chromatography compare to prep HPLC?

For medicinal chemists, maximizing the synthetic yield of their newly created intermediate compound is their priority. More times than not, flash chromatography is used to purify these intermediate compounds to at least 80% purity. Final compounds, however, not only require high yield but maximum attainable purity, typically in excess of 95%. For this purity level, chemists will either send the reaction mixture to an in-house prep HPLC lab or perform their own preparative HPLC compound purification, if it is available in the lab.

Given the advances made in flash chromatography columns, is prep HPLC really necessary to achieve such purity goals? Prep HPLC equipment and columns are expensive and usually require specialized training (hence the separate in-house prep HPLC lab). Also, the small particle media used in prep HPLC columns overloads more quickly than larger flash chromatography particles; a topic on which I recently posted. Due to prep HPLC's lower loading capacity the results attainable by prep HPLC are really are not any better than flash and is the reason why flash chromatography is used for prep scale reaction purification.

In this post, I show examples of why flash chromatography is better than prep HPLC.

There are several differences between flash chromatography and prep HPLC including:

Column dimensions – HPLC columns, including prep columns, tend to be longer and narrower than their equivalent flash column. While longer columns can provide better separations, with high sample loads this benefit also vanishes.

Flow rates – Because HPLC columns have relatively narrow diameters, longer lengths, and smaller particles, the pressure generated by them is quite high and can exceed the limits of most flash chromatography systems; hence the need for special, high pressure systems. Since flash columns tend to be shorter and wider with larger particles, the flow rates used are higher and the resulting pressures lower allowing use on less expensive flash systems.

I tested each column's ability to separate equivalent loads of two different samples. One sample was a mixture of seven compounds and the other a natural product extract. While each sample required a different method, the same gradient was used with each column.

The seven-component sample contained 0.5 gram each of naphthalene, 3,5-dibenzyloxyacetophenone, 4’-methoxyacetanilide, methyl paraben, ethyl paraben, propyl paraben, and butyl paraben dissolved in acetone to a total volume of 10 mL. Each 60 gram column was loaded with 700 mg (2 mL) of the sample.

The separations achieved with both columns are very comparable, however, due to the either the large (2 mL) injection volume or an issue with solubility, the first eluting compound’s peak shape is distorted on the prep HPLC, Figure 1. Also, the pressure generated during the prep HPLC run exceeded 380 psi while the flash column generated only 70 psi. 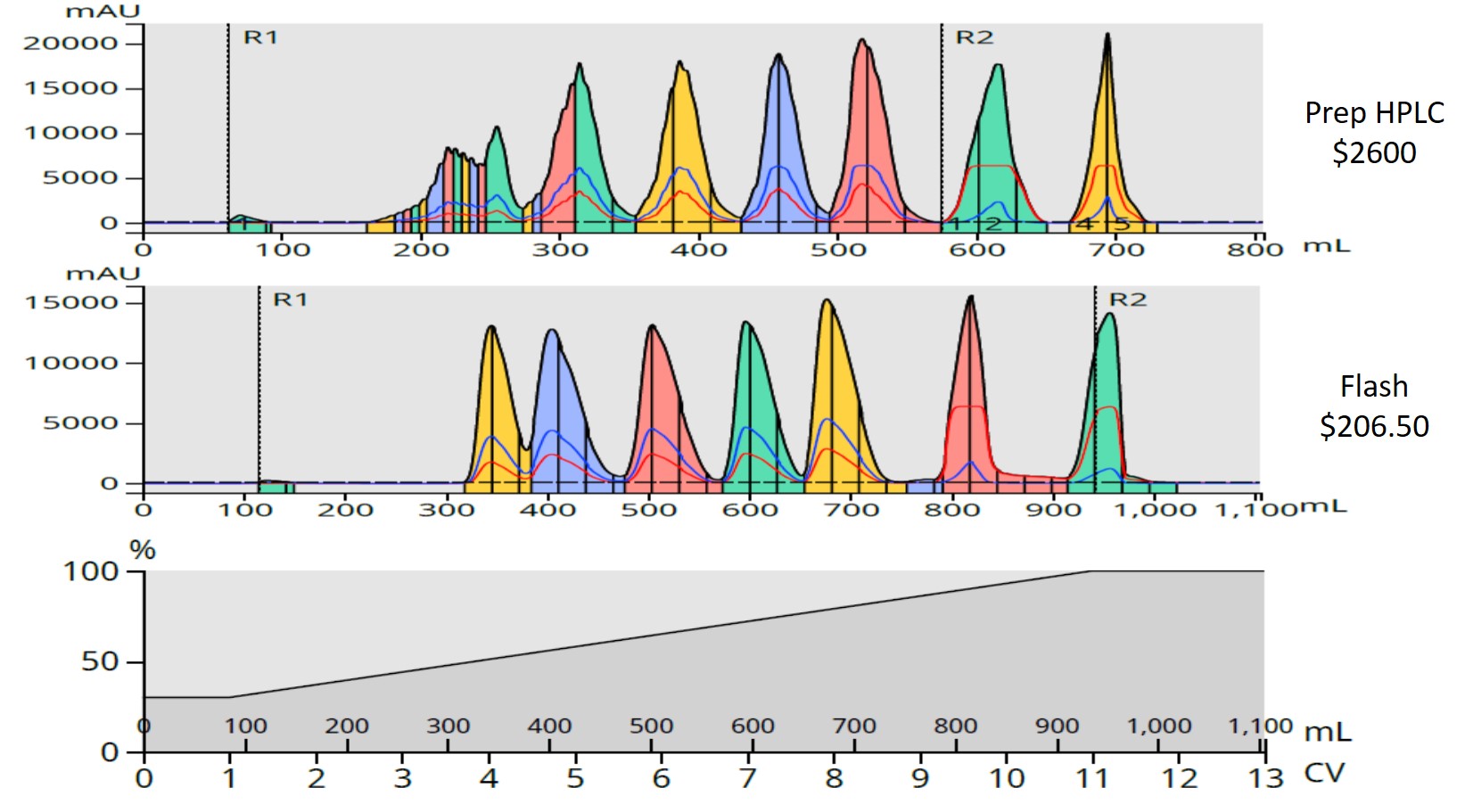 So, since this data shows flash chromatography separation results are the same, if not better than prep HPLC, there really is no reason to use prep HPLC. Add to that the fact that both simple and complex mixtures can be purified to the same level using flash chromatography but in ½ to 1/3 the time and with a column that costs less than 1/10th that of the HPLC column.