How should I purify a complex, polar, amide reaction mixture?

Even the simplest organic chemistry reactions can result in a complex mixture. This is the situation I recently encountered with the seemingly simple reaction of an organic acid (nicotinuric acid) and an organic base (benzyl amine) to create an amide, Figure 1.

Figure 1. The 10 minute reaction of nicotinuric acid and benzyl amine at 200 °C in ethyl acetate should create the amide shown.

After synthesis, crystals formed upon cooling. After filtration and washing with ethyl acetate, the crystals were analyzed with a Biotage® Isolera Dalton 2000 and found to contain both product (M+H 270) and excess nicotinuric acid (M+H 181), total crystal mass of 43 mg.

The mother liquor (bright yellow) was analyzed by TLC in various hexane/ethyl acetate ratios but the products barely moved from baseline so I decided to use reversed-phase for the purification (25-75% methanol linear gradient over 10 column volumes) with a 12 gram Biotage® Sfär C18 column and Biotage® Selekt flash chromatography system. While the compounds were retained, the separation is less than ideal, Figure 2.

Figure 2. Reversed-phase flash chromatography of the reaction mixture. The product (yellow) is only partially separated from a major by-product.

Rather than spend time optimizing the gradient conditions and looking at different solvents, I opted to evaluate an ion exchange media (ISOLUTE® SCX-2) for dry loading. Why SCX? Though the amide product is theoretically neutral and uncharged, the newly added amine functional group should still be attracted to an anionic functional group (propylsulfonic acid). If so, then mixing the mother liquor with the SCX media and drying it should force the reaction of the "new" amide's nitrogen (from the benzyl amine reaction) with the SCX sulfonic acid and trap the product for release later with a basic solvent. If this worked, my product should stick to the SCX and the impurity should not.

I first tried this small scale and found my theory held up with the product eluting in 1% NH4OH in methanol, Figure 3.

Analysis of fraction 14 (pink peak in Figure 3), however, showed I successfully bound/released not only my target compound but some other basic by-products. Not a problem since the major impurity is removed so re-purification using the original 25-75% methanol gradient should separate the other by-products from my product.

The product fraction (fraction 14) was dried on C18 media, packed into a Samplet® cartridge, re-purified using the original method, and provided a complete separation of the product and basic by-product, Figure 4.

Based on this success, I purified the remainder of the mother liquor (~1 gram) using 5 grams of SCX media and the same C18 column. This load is excessively high for a 12 gram C18 column but by using the SCX media to “capture” and concentrate my product, and with the major impurity eluting much early in the run, I figured I could maximize load.

The chromatography showed a messy, but ultimately successful, purification with the major by-product contaminant eluting early and my product eluting with the base wash in fractions 15-17, Figure 5.

Drying fractions 15-17 yielded 330 mg of a yellow solid which, when re-purified, generated a much cleaner product chromatogram with the product fractions (fraction 5-7) colorless, Figure 6.

Figure 6. Re-purified SCX-captured fraction shows full removal of the major reaction by-product with the presence of a few other by-products. The desired reaction product is the pink peak and was colorless in the collection vessel. 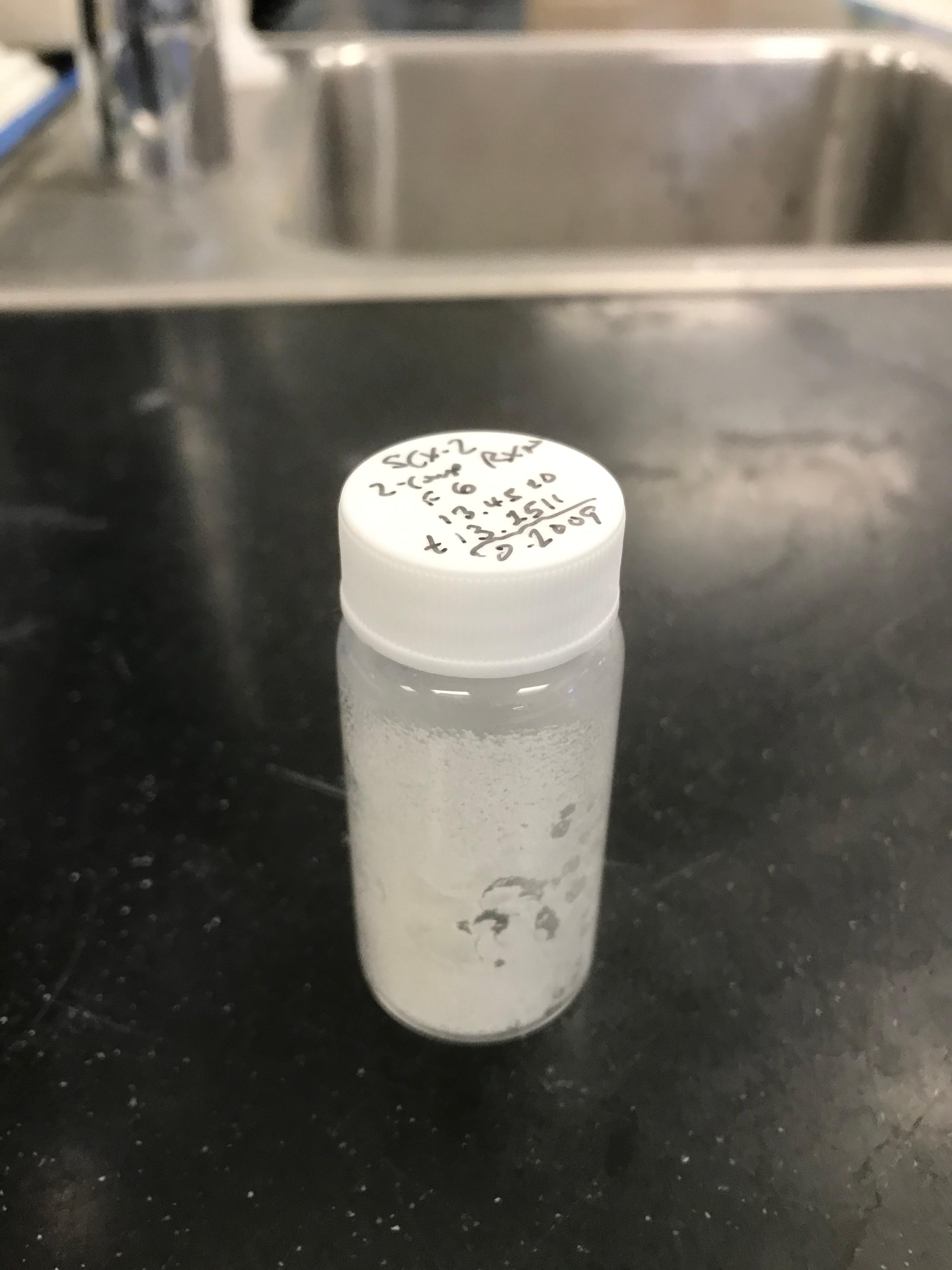 Complex, difficult to purify reaction mixture purification can often be improved by using functionalized dry load media. Previously, I posted about the use of the same SCX media for scavenging (removing) amine by-products from a reaction mixture.