For most synthesis and natural product chemists, flash chromatography is the primary tool for purification and isolation of compounds of interest. Purification methods include flash system defaulted linear gradients (e.g. 0-100%), active gradient modification (on-the-fly) during purification, and unique method creation based one either the chemist’s experience or TLC data (typically a linear gradient).

Rarely do chemists work to optimize the purification to maximize target compound purity by employing a step gradient. In this post, I discuss the value optimized step gradients provide chemists.

For routine purification, many chemists use a simple linear gradient and load their crude mixture at about 1% of the column size. Other chemists begin purifying their mixture and change the gradient in an effort to improve the separation and experienced chemists often create their own methods based on previous knowledge with a synthetic compound class.

Depending on your specific purification goals, one of these techniques may be all you need but it has been my experience that to really maximize your targeted compound purity, load (yield), and efficiency (speed), flash methods really should be optimized, both in design and sample load.

The simplest approach to this is through TLC. Personally, I like to test my sample separation using two or three TLC plates with different solvent ratios such as 10%, 20%, and 30% EtOAc in hexane. By doing this, you can quickly determine which two solvent blends provide the best separation of your crude mixture and create both linear and step gradients.

To help illustrate the benefits obtainable by taking the TLC to gradient method optimization approach, I spent some time in my lab practicing this strategy with a challenging, 4-component crude mixture. I evaluated the sample separation using TLC with 30% and 40% ethyl acetate (EtOAc) in hexane, Figure 1. The TLC data showed three of the four compounds elute fairly close to each other, which limits loading capacity. 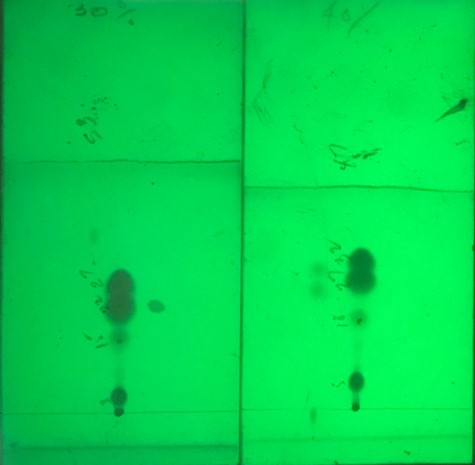 Figure 1. TLC separations at 30% EtOAc (left) and 40% TLC (right) show a classic "figure 8" separation of the first two compounds with the target product eluting below them.

Using the TLC data from each plate (Rf values and EtOAc %), I created linear gradients on a Biotage® Selekt flash system using a 5 gram Biotage® Sfär HC column. The results from each of the gradients showed ok separations but did not fully resolve my target compound (third) from its nearest eluting neighbor, Figure 2. 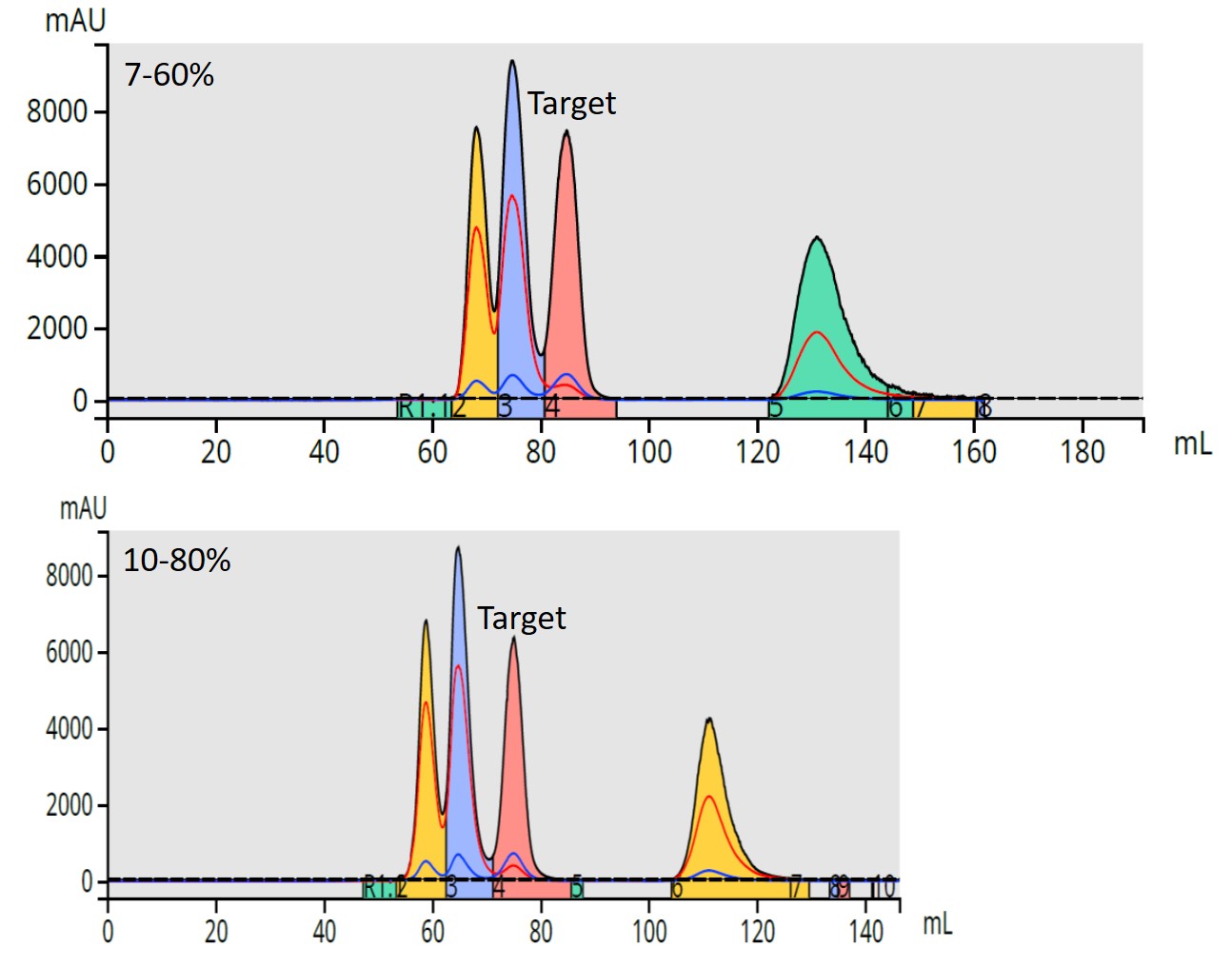 While linear gradients are very useful they sometimes do not provide the separation efficiency needed and can consume more solvent (and time) than what you my like, as seen in Figure 2. In that example, the purification consumed between 150 and 190 mL (depending on the gradient) without full compound separation with a light, 35 mg load. At a flow rate of 18 mL/min, the linear gradient runs required between 8 and 11 minutes to occur.

The solution to this poor separation issue is not re-inventing the method but to use your existing data to create a better method – a step gradient.

The Selekt system creates a step gradient from two sets of TLC data and in most cases, provides a better, faster separation with increased loading capacity. This is true with this sample (and many others I have purified), Figure 3.

Figure 3. Purification results using a step gradient created from the above TLC data show a far better separation of the target compound (yellow peak) from its neighbors at 3x the sample load (105 mg) on the same 5 gram column.

Here, the same TLC Rf and solvent % data was converted by the Selekt system to create a step gradient that…

Purified 3x the sample load on the same column size


These are three strong reasons to consider using a well-designed, automated step gradient, which in turn improves your synthesis efficiency while reducing both time and solvent use.

To learn more about flash chromatography, listen to my webinar here: