What are alternatives to DCM/MeOH for polar reaction mix purifications?

For most chemists purifying organic reaction mixtures, normal-phase flash chromatography is the go-to technique. Why not, it is quick, relatively efficient, and can provide relatively high loading capacities if the separation is properly optimized. However, most of these same chemists rely on only two sets of solvents to perform these purifications…

Frequently, the polar reaction mixtures being purified with DCM/MeOH become problematic with synthesized compounds either eluting too early, very late, or not separating at all. Besides those issues, DCM is not a safe solvent to use and does not lend itself to sustainable green chemistry, which currently is a polar subject and goal within many pharma and chemical companies.

So, with that in mind in this post I will provide some purification options by comparing different solvent systems for the purification of a polar reaction product.

The goal of reducing the use of harmful solvents in chemistry labs has been ongoing for many years. During my 22+ years at Biotage, this topic frequently occurs with customers asking what they can do to make their routine and non-routine purifications safer. Another frequent question I get asked is how to separate polar compounds that either do not elute or do not separate with DCM/MeOH mobile phase gradients. These are separate, but sometimes related issues. 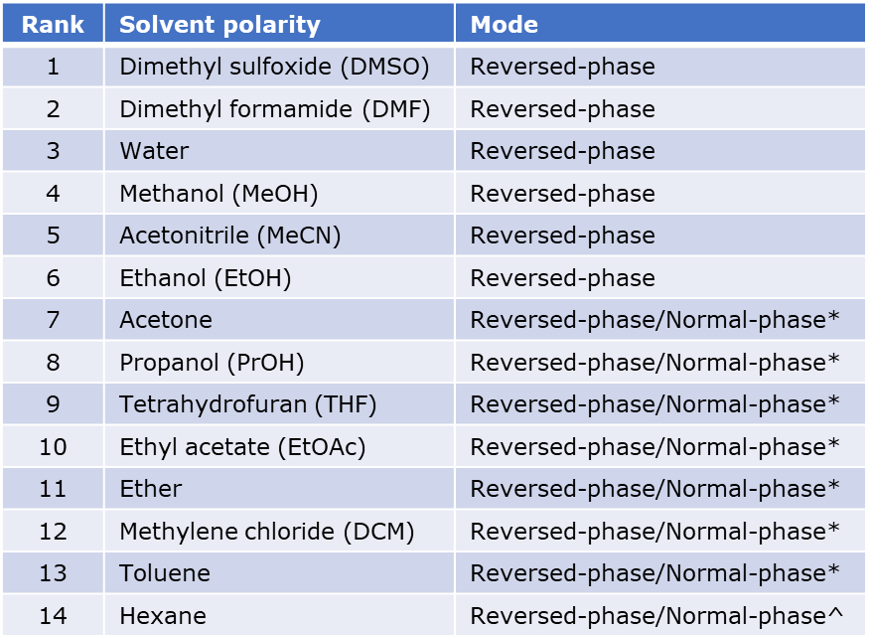 The reaction mixture product was initially soluble in acetonitrile but began to slowly crystalize while cooling. To speed the crystallization process, I evaporated the acetonitrile with a Biotage® V-10 Touch and redissolved the solid in methanol (DCM did not work). I then performed TLC with three different solvent blends to evaluate their separation capability.

The first solvent blend, MeOH/DCM, is very commonly used for these types of reaction mixtures. I personally prefer MeCN/DCM because its TLC RF values typically correlate to flash better than MeOH/DCM. The third solvent blend (40% 3:1 EtOAc/IPA in hexane) is based on the work of Emily Peterson and colleagues in their 2012 publication in Green Chemistry (Taygerly, Miller, Yee, & Peterson, 2012). For this publication they evaluated a number of mobile phase alternates to DCM/MeOH for pharmaceutical-like compounds and found a 3:1 ratio of EtOAc/EtOH, when used with heptane, to be the best alternative.

The TLC data from these three solvent mixtures show the product eluted with Rf values between 0.4 and 0.7. However, the separation of the product from some impurities was clearly best when using the EtOAc/IPA/hexane blend, Figure 2. 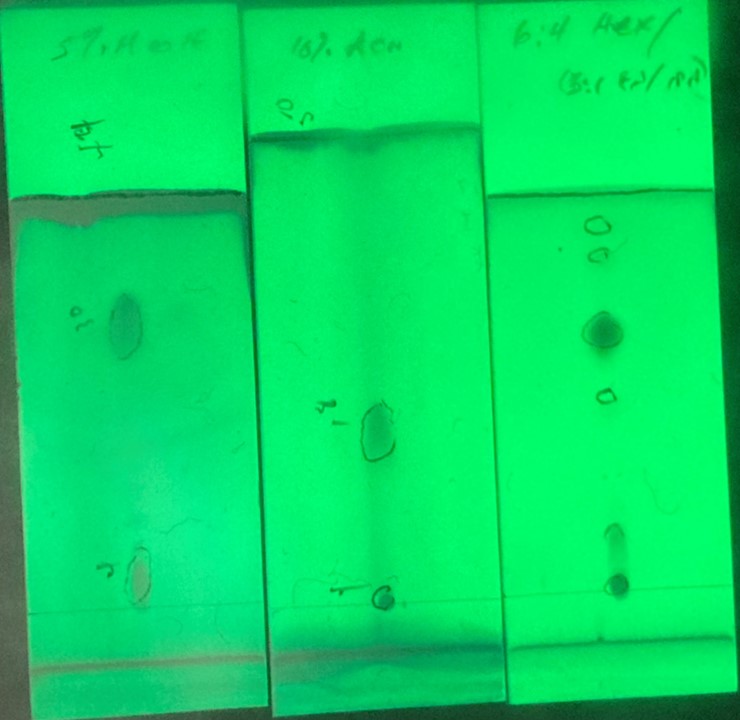 The resulting flash chromatography on my Biotage® Isolera Dalton 2000 showed the EtOAc/IPA/hexane gradient to be the most effective normal-phase method, fully removing the major by-product (+m/z 164) from the product (+m/z 283). Neither DCM/MeOH nor DCM/MeCN resolved the product from the by-product as effectively, Figure 3.

So, of the three normal-phase flash runs, the EtOAC/IPA/hexane method clearly provides the best purification and uses the most sustainable/green solvents.

An even more sustainable/green purification methodology can be used for this reaction mixture and most others as well – reversed-phase flash chromatography. Yes, you need to evaporate water from your product fractions, but it is not that big of a problem.

Though the reversed-phase columns are more expensive than silica columns, your purification results, not to mention the greenness and sustainability improvements, are likely to be much better with reversed-phase than normal-phase, Figure 4. 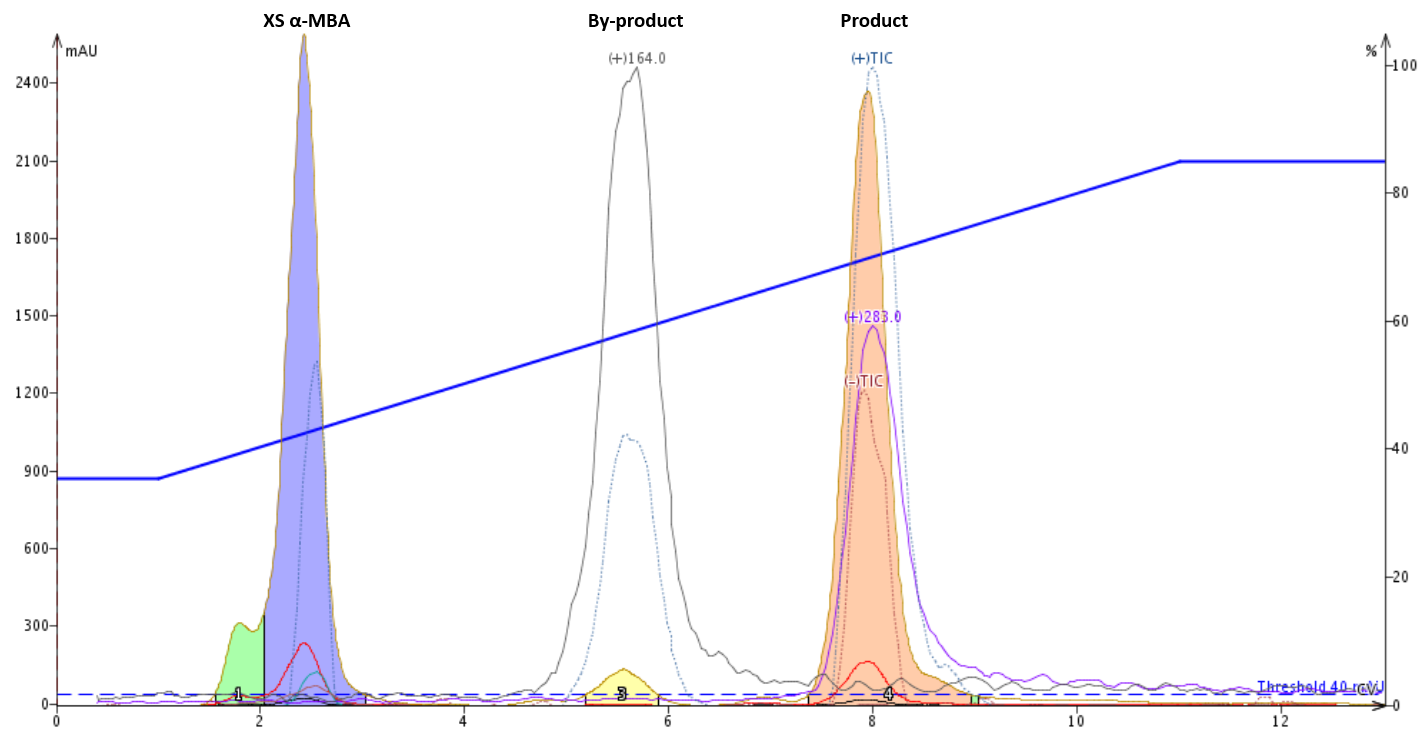 Of all these options, reversed-phase is the most sustainable due to the generation of less waste...

So, two options are available as alternatives to DCM/MeOH purification methods…