What do I do if a 2-solvent gradient will not separate my sample?

Usually, a 2-solvent or binary gradient will separate your desired compound from the by-products and impurities. Sometimes though, you can encounter a mixture in which some compounds co-elute and are not separable with any binary gradient you try.

I encountered this situation recently while trying to purify a lavender essential oil and have dedicated this post to how I solved the problem.

While essential oils typically have pleasant aromas their chemistry can be quite complex containing many different terpenes and terpenoids blended to create the unique fragrance.  Unfortunately, TLC with UV detection is of minimal value as the vast majority of these compounds do not absorb UV at wavelengths above 210 nm, so other detection options need to be explored.

Since I did not have access to TLC stains or other derivitization reagents in my lab, I opted to use my flash-MS system (a Biotage® Isolera Dalton 2000) with an APCI source for method scouting.  I performed a mass analysis of my sample to discover the most abundant compound masses.  I did this by using a solid sample probe (ASAP) to introduce a small film of the oil into the APCI source which then heated and ionized the sample.  Dominant detected masses included 137, 196, and 153.

My previous work with carrot seed oil, which also contains numerous terpenes and terpenoids, used a hexane/ethyl acetate gradient so I thought I would start there. To minimize solvent consumption I chose to use 5-gram Biotage® ZIP-Sphere cartridges for my work.

Terpenes and terpenoids are typically small, lipophilic molecules and elute in normal-phase flash chromatography with a low amount of polar solvent (ethyl acetate) so I started with a relatively shallow gradient (0 – 15% ethyl acetate in hexane over 10 column volumes (CV)). With this binary gradient, I was able to separate two major peaks, both with the same mass/charge ratio (+m/z 137) but a compound with a +m/z of 196 co-eluted with the first mass-detected peak at ~8 column volumes (8 CV), Figure 1.

Organic solvents have both different elution strengths and selectivity, so with that knowledge I opted to replace ethyl acetate, a selectivity class 6 solvent, with dichloromethane, a selectivity class 5 solvent, to see if I could alter the separation. Dichloromethane is also a weaker eluting solvent than ethyl acetate so I created a 20 – 100% hexane/dichloromethane gradient, which did indeed produce a different result.  Unfortunately, the +m/z 196 peak moved from one +m/z 137 peak to the other +m/z 137 peak, Figure 2. Great, I have moved the +m/z 196 away from the first +m/z 137 peak but now it co-elutes with the other - now what should I do?

I tried 15%, 17%, and 20% dichloromethane blends while maintaining my 0 - 10% hexane/ethyl acetate gradient, Figures 3, 4, and 5, resp. Each of the ternary blends provided a better separation of +m/z 196 from the other terpenoids than either binary gradient but the best results came from the 17% dichloromethane blend. The first detected +m/z 137 peak is quite broad because it contains many terpenoids with the same mass and similar chemistries which are difficult to separate. 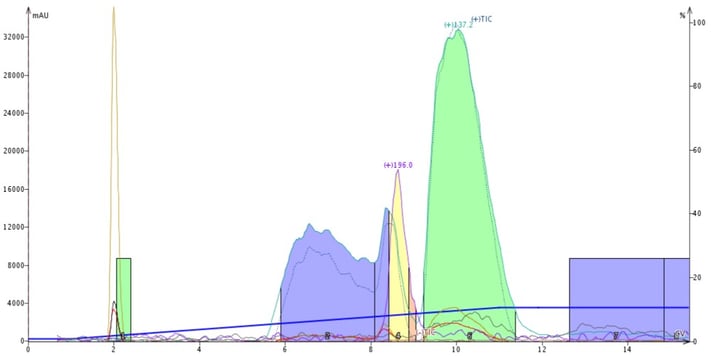 Figure 3. Lavender oil purified using a 0 - 10% hexane-ethyl acetate gradient with an isocratic 15% DCM blend pulls +m/z 196 (yellow) away from the later-eluting terpenoid (green) but into the first eluting terpenoid (blue).

The bottom line here is when faced with purifying a challenging sample, think “out-of-the-box” if you will, and experiment with different solvent systems for your purification method development. If TLC is not an option, use as small a flash column as you can to minimize both solvent and time consumption and do not be afraid to mix in a third solvent to help improve your purification.

Have you encountered challenging purifications like this?  If so, how did you solve it?