When should I use a pH modifier in flash column chromatography gradient?

Have you ever experienced compound tailing or streaking on your TLC plate or flash chromatography results and wondered what in the world is going on here? Well, there can be multiple reasons for this problem including poor mass-transfer kinetics, secondary solute-sorbent interactions, or unstable compound chemistry.

In this post, I will discuss one technique that has been shown to work time and time again to address the issue.

So, you have a sample in which one or more compounds do not behave as you would like, at least when it comes to their chromatography. You have spent time trying to make a suitable purification method only to find that the compound of interest requires a lot of solvent to elute, elutes in a broad band, and/or does not separate well from other sample components.

This can happen in both normal- and reversed-phase modes. In situations like this, there are typically secondary compound-sorbent interactions that have a negative impact on compound mass transfer.

In a previous post, I discussed how adding buffers to mobile phases helps improve peak shape and increase retention for polar, ionic, and ionizable compounds. Here, I will talk about how to speed up mass-transfer for compounds that are hydrophobic but contain functional groups attracted to residual silanols in reversed-phase flash chromatography.

One compound class that can be problematic are alkaloids.  These fairly lipophilic compounds contain at least one basic nitrogen, Figure 1. Basic nitrogen compounds are attracted to acidic functionality such as silanol groups (the reactive part of silica). 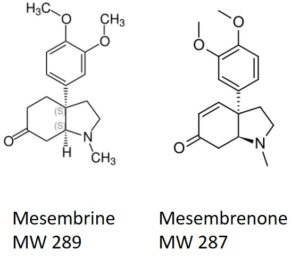 Figure 1. Mesembrine and mesembrenone are naturally-occurring alkaloids found in Kanna.

Though reversed-phase media is derivatized with organosilanes (typically C18 and C1) there are still unreacted silanols left (due to steric hindrance).  The residual silanols act as a magnet for bases such as the afore-mentioned alkaloids and cause peak broadening and separation loss, Figure 2.

Figure 2. Plant extract purification using a water-methanol gradient without pH modification creates a separation of the two targeted molecules but the peaks are broad and little of mesembrenone (green) is collected.

To alleviate this problem, add a competing amine such as ammonium hydroxide to the mobile phase. During column equilibration, the silanols attract the amine additive in the mobile phase, which neutralizes them. Maintaining the same amine concentration throughout the gradient ensures improved chromatography for these troublesome compounds.  Without active silanols to interfere with the mass-transfer kinetics, basic compounds then separate better and elute in tighter bands, Figure 3, and sometimes help with the elution of even more strongly-bound compounds.

Figure 3. Plant extract using a water-methanol gradient modified with 0.1% aqueous ammonium hydroxide (fed isocratically during the gradient). The base sharpens the targeted compounds elution bands providing more of each compound to be collected. The base addition also elutes two other compounds found in the sample.

Mass analysis of the crude extract revealed the presence of a number of compounds including strong responses for unknown compound with +m/z of 336 and 364, Figure 4.

Figure 4.  Mass analysis of crude extract show the presence of many endemic compounds besides the two alkaloids targeted (288 and 290).  The large peak at 331 is the acetonitrile adduct of mesembrine. Both m/z 336 and m/z 364 are unknowns but not related to the targeted molecules.

In Figure 3, the additive was actually a third, independent solvent fed into the gradient isocratically.  Solvent A was water, solvent B was methanol, and solvent C was 1% NH4OH in water. Solvent C was fed isocratically into the gradient at a 10% level and the flash system, a Biotage® Isolera One, then adjusted the original gradient accordingly.  Introducing the modifier as an independent solvent eliminated the need to premix both the A and B solvents with ammonium hydroxide.

Additives are not limited to competing amines.  Acids can also be used to protonate acidic compounds and neutral solvents can be used, especially in normal-phase, to eliminate compound precipitation during chromatography.

Have you ever needed to add a modifier to your solvent system?  If so, share your experience with us.

Interested in learning more about flash chromatography?  Please download our white paper Inspiring Productivity with Modern Flash Chromatography by clicking the link below