Biotage vs Biotage, and the winner is...

When Isolera™ was launched, the maximum system pressure that could be reached was 10 bars, but reaching that pressure was a challenge since most of the Flash columns could not withstand the higher pressures. The maximum pressure rating for the Biotage® SNAP columns, for example, is limited to five or seven bars, depending on the size, and columns from most of manufacturers have the same limitation.

When we decided to replace the SNAP family and introduce the Biotage® Sfär family, we also decided to increase the pressure that they could withstand. With increased pressure tolerance comes the ability to withstand higher flow rates and, as a result, a quicker equilibration process.

In the Biotage® Selekt system, the maximum pressure possible is 32 bar, and the newly developed Sfär columns can be run at between 12 or 20 bar, depending on size.

It is widely known that using higher flow rates during column equilibration provides more efficient wetting of the Silica. The increased equilibration flow rates generate higher pressure which forces solvent into the media's pores and displacing the entrapped air. As a result, less solvent and less time might be needed to fully equilibrate the column. Provided that the columns can actually stand the pressure.

To show the benefits provided using increased equilibration flow/pressure, we compared the combination of Isolera and SNAP columns (with their flowrate and pressure limitations) against the Selekt with Sfär team, that can run with a higher flow flowrate and at a higher pressure, Table 1. Check it out here: The results speak for themselves! 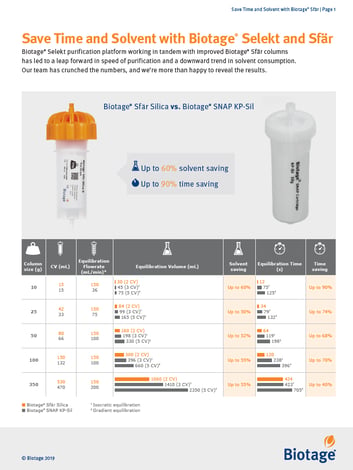 In the Isolera system, two equilibration methods were used:

The reason for the two different equilibration methods was due to the fact that the Isolera system could not handle the heat generated during the initial solvation of the Silica bed.

With the Selekt system we designed a novel, "pressure-based" equilibration protocol which is used with the Sfär columns thus enabling faster equilibration.  This new equilibration method also reduces the required volume for sufficient wetting.

All this savings without separation performance degradation, Figure 1. 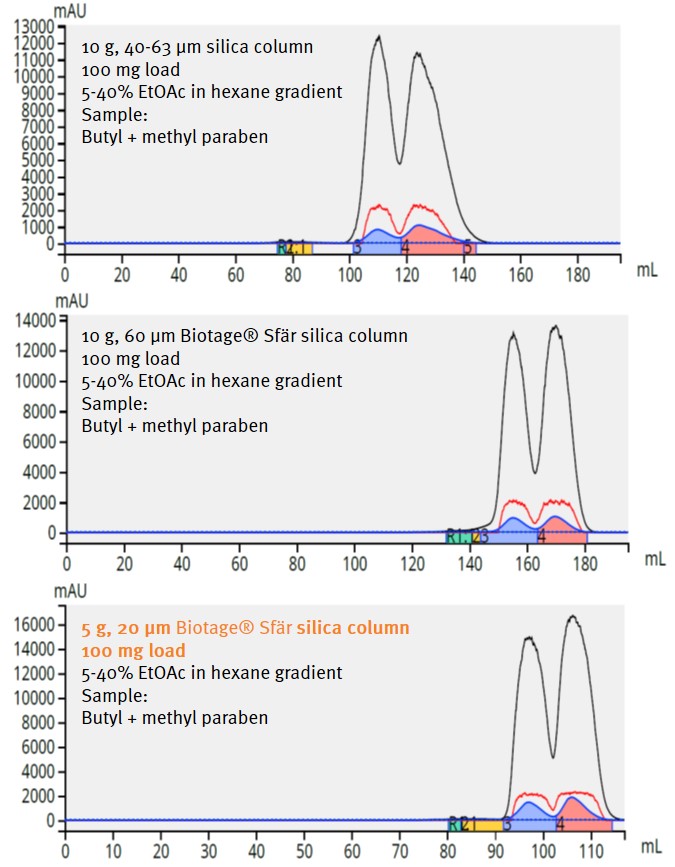 While speed is not everything, speed combined with solvent savings, excellent separation performance, and increased safety is definitely a step in the right direction.

Please leave your comments below or contact your Biotage representative to give Sfär a try.