The answer to this question is yes, reversed-phase can sometimes provide a better separation and thus better purification than normal-phase.  When is reversed-phase likely to be the better choice is a different, and likely better, question.

In this post I will try to demonstrate when reversed-phase is likely the better purification mode.

As reaction mixtures become more and more complex and polar, traditional normal-phase flash purification methodology becomes less and less effective.  Historically, chemists purifying polar compounds have resorted to silica and a mobile phase of DCM + MeOH, which can work but is often problematic and unpredictable, Figure 1.

Reversed-phase flash chromatography, though being around for decades, is rarely utilized because of concerns regarding solvent evaporation and system contamination from the water using the reversed-phase methods. The latter concern is typically addressed by either performing prep HPLC or by purchasing a second flash system dedicated to reversed-phase applications only.  While effective, this adds extra cost to a lab, a topic a addressed previously.

With modern evaporation technology, the first issue is really not that big of a deal either.  Even 100% water can easily be evaporated these days using an evaporation system such as the Biotage® V-10 Touch.

Getting back on topic, when is reversed-phase likely to be a better purification mode choice? To answer this, let’s think about our compound's chemistry and chromatographic separation mechanism theory.  If you recall, normal-phase chromatography performed with silica or alumina utilizes a separation mechanism of adsorption and desorption.  Basically, polar compounds are adsorbed through polar interactions with the sorbent’s surface area and remain there until the solvent polarity is high enough to desorb them.  Once desorbed, the compounds stay in solution and elute from the column.

So, compounds with different polar functionality likely will display different adsorption/desorption kinetics and elute at different times during a gradient.  Very polar compounds require higher polarity solvents to desorb and very slight changes in the polar modifier concentration can cause compounds to desorb making method optimization a challenge. Sometimes, a change in polar modifier is needed to complete the task, Figure 2.

Figure 2. DCM-ACN gradient purification of butyl paraben, methyl paraben and 4-methyl-4(5)-nitroimidazole. By replacing protic methanol with aprotic acetonitrile, a separation of the parabens is accomplished.

Now, let’s think about the reversed-phase separation mechanism.  This is a partitioning mechanism similar to liquid-liquid extraction except this is liquid-solid extraction.  With reversed-phase, the compounds are attracted to the reversed-phase media via hydrophobic interactions.  During the elution gradient, compounds will begin to have their partitioning kinetics altered with increasing organic solvent content and begin to elute. The more hydrophobic the compound is, the greater the retention and the more organic solvent required to elute it.

During a recent training exercise using a Biotage® Selekt system with new team members, I was able to demonstrate this quite easily using a mixture of methyl and butyl paraben dissolved in acetone (Figure 3).

I had them perform TLC with this mixture in 20% ethyl acetate which provided Rf values of 0.38 (butyl) and 0.30 (methyl), and then create a normal-phase method from the TLC data, Figure 4. 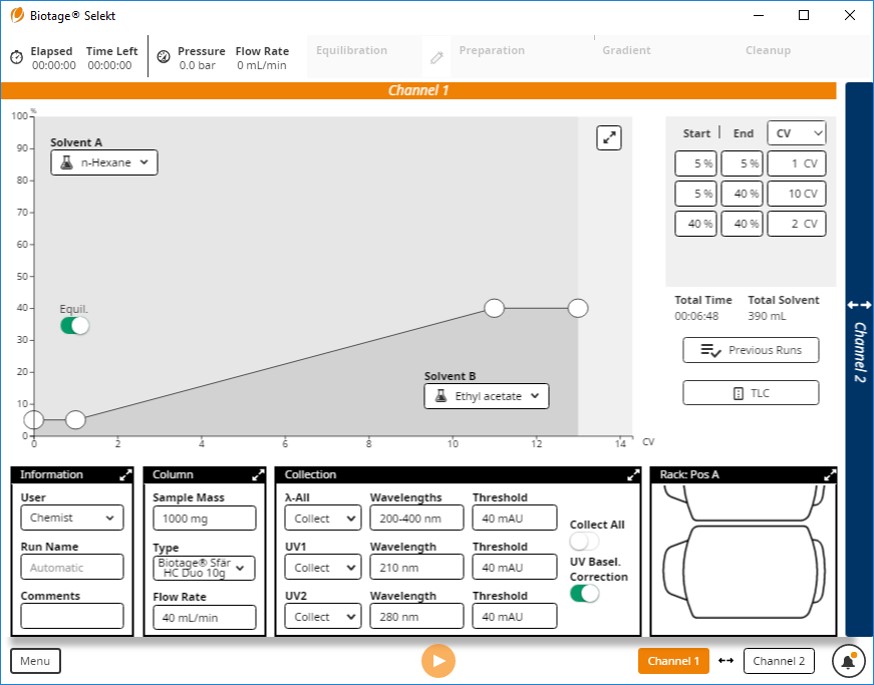 The paraben mix, 100 mg, was applied to a Samplet® cartridge filled with ~1 gram of ISOLUTE® HM-N, a refined diatomaceous earth, and allowed to dry.  After column equilibration, the Samplet cartridge was inserted into the purification column (a 5 gram, 20 µm Biotage® Sfär silica column) and the purification started.  The results showed a good separation considering there is very little polarity difference between the two parabens, Figure 5.

There is, however, a great amount of hydrophobicity difference between these compounds to exploit as one has a single methyl group as part of the ester and the other a butyl group, making it much more hydrophobic. Because of this 3-carbon difference, reversed-phase should provide a really good separation.

Starting with a mobile phase of 1:1 methanol/water, a linear gradient to 100% methanol over 10 column volumes (CV) was created and used on the same Biotage Selekt system (it has two independent flow paths and automatically switches between normal-phase solvents and reversed-phase solvents in under 15 seconds).  The results showed an excellent separation for the same sample load (100 mg) using a 6 gram, ~27 µm, Biotage® Sfär C18 column, Figure 6.

Figure 6. Reversed-phase purification of methyl and butyl paraben (50 mg each) on a 6 gram Biotage® Sfär C18 column is superior to the normal-phase separation with the same load on the same size column.

So, yes, reversed-phase can provide a better separation than normal-phase especially when the molecules differ in hydrophobicity rather than polarity.

For more information on flash chromatography, I invite you to listen to my webinar!