Yes, the title is a bit salacious but it got your attention, didn’t it? I believe this is a topic worthy of discussion as it relates to flash chromatography for purification because many chemists believe longer but thinner columns perform better than short, wide columns.  The facts of the matter may surprise you.

In this post I discuss the impact that cartridge dimensions have on purification performed using flash purification.

As with all chromatographic techniques one of the basic tenets impacting a separation is column efficiency or plate count – the more plates the better the resolution between eluting compounds. No debate on that point whether we are talking analytical chromatography or preparative chromatography, flash chromatography included.

There are several parameters which impact chromatographic plate count including…

In short, quite a few variables which impact column efficiency and resolution, many of which are in your control (e.g. load amount, linear velocity, gradient, cartridge/media choice).

But for flash purification how important is plate count really? In analytical chromatography (e.g. HPLC) efficiency is critical as it is used to quantitatively determine the amount of a sample’s components.  In this case, complete resolution and maximum sensitivity are paramount, loading capacity is not.  However, in flash chromatography we are focused on a different goal – isolating compounds in quantity usually with a specific purity goal, typically 80%+.

To achieve these purity and yield targets using flash chromatography there is a belief that longer flash columns will provide better purification than shorter columns with an equal amount of the same media.  While it is true that longer columns generate more plates per column, in my experience I have not found length to impact flash chromatographic performance (e.g. resolution, loading capacity, and product purity) as long as the two cartridges have the same amount of media, similar plates per meter, and the same gradient method.

I believe the reason for this is that both cartridges contain the same amount of media and therefore the same volume.  When you load a flash column with your crude mixture it fills space in the top of the column including filling the sorbent’s pores.  That occupied space is the same volume regardless of column size but in a long, thin column the loading band height is thick whereas in a wider column the band height is narrower.  Therefore, during purification as the compounds move down the column and their elution bands broaden and by the time the compounds elute they will be of almost equal volume. So, as long as the two different cartridges have the same amount of media, have similar plates per meter, and are using the same gradient profile, then a short wide column should perform as well as a long thin column. 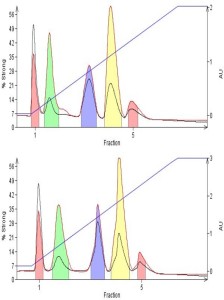 In previous posts I discussed how method optimization maximizes your load amount for any size cartridge.  Couple the optimization information together with a well-packed, short and wide flash column and you will be purifying large amounts of material faster.

Have you experimented with different column dimensions? Share your results.

If you are interested in learning more about flash chromatography, please download our white paper Successful Flash Chromatography.