How many times can I reuse my flash chromatography column?

Flash chromatography – a purification tool for both organic chemists and natural product researchers.  This tool is essential when you need to remove impurities from your targeted product, or products, in order to get them pure.  To reduce the costs associated with flash chromatography, some chemists try reusing the same column over and over, not always with success.

A question I am frequently asked is “how many times can I reuse my flash column?” Although I have previously addressed this topic, I feel it is worth another look. In this post, I will attempt to address this question by providing a bit more science behind the cartridge reuse question.

Column reuse is an issue of both economics and chemistry. With reversed-phase chromatography, column reuse is a given.  Why, because the hydrophobic stationary phase is washable with organic solvents to remove highly retained contaminants and the columns can be stored in acetonitrile or methanol for long time periods. Though reversed-phase columns cost more than silica columns, their reusability soon pays for the cost difference.

So, what does active mean?  Well, as you know, silica is a drying agent as well as a chromatography sorbent. Its active nature allows it to adsorb water, among other solvents.

Have you ever noticed how warm a new, dry silica column gets when solvent is introduced?  This phenomena is the heat of adsorption and as more solvent is pumped through the column the heat dissipates as the silica becomes “deactivated”.

However, solvent chemistry plays a role with the amount of deactivation taking place.  Hydrocarbons such as hexane or heptane are very non-polar a do not generate nearly as much heat or deactivation as, say, ethyl acetate or an alcohol.  Much of this stationary phase wetting exotherm has to do with solvent polarity, as you can imagine – and that is where the problems regarding reuse start.

The more polar the organic solvent, the more deactivated the silica becomes and the less likely it is to provide the same quality separation as previously achieved.  As an example, I used two different brands of silica columns three consecutive times running a hexane-ethyl acetate gradient with a 5-component sample, Figure 1. The results show decreasing compound retention of the three most polar compounds along with decreased separation with each consecutive run with both brands. Brand R actually degraded enough by the third run that the third and fourth peaks co-elute! 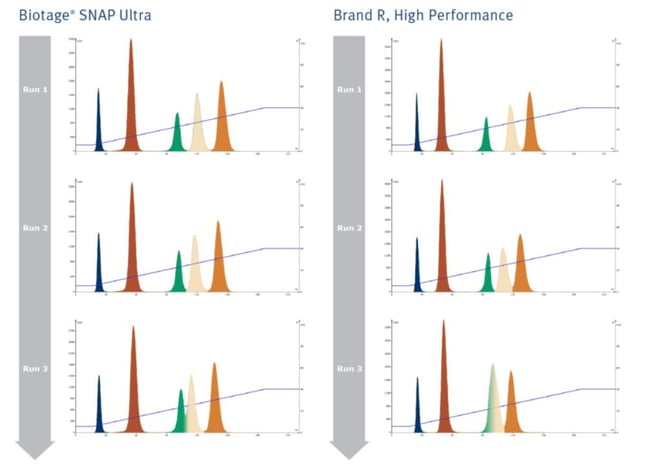 Figure 1. When polar solvents are used in gradients with silica columns the silica becomes deactivated. Even with flushing with a weaker solvent silica activity cannot be restored resulting in continually decreased compound retention and separation.

Once silica deactivates, it is virtually impossible to reactivate it. No amount of washing with hexane or other solvent will remove the adsorbed polar solvent, regardless of its concentration.

Are there exceptions? Of course, including running isocratic methods and using solvents with low polarity, such as dichloromethane. Under these conditions it may be possible to re-use your silica column.

So, the answer to the original question - how many times can I reuse my flash column depends on the type of stationary phase and the solvents used.  For practical purposes, to avoid potentially adding contaminants to subsequent normal-phase purification, use the silica column only once - its just good science.