For most organic and medicinal chemists, normal-phase flash chromatography is used to purify and isolate many types of organic compounds, most with some polar functional groups which help them retain on silica. However, some compound mixtures are water insoluble such as lipids, carotenoids, terpenes, tocopherols, polyaromatic and other hydrocarbons with minimal polar functionality.   These lipophilic compounds do not retain well on silica and do not dissolve readily in water making them really difficult to separate.

In this post I will talk about a technique called non-aqueous reversed-phase chromatography that can be very effective at separating and purifying very lipophilic compounds.

Separation of the aforementioned compounds via normal-phase chromatography can be a challenge since there are few polar groups to interact with the polar stationary phase to generate retention and selectivity. That leaves reversed-phase chromatography for their purification but these compounds are not soluble in water.  Is this really an issue?  No, because reversed-phase columns can be used with organic solvents for very retentive compounds.

In these situations, mobile phases of 90-100% organic in water or even blends of organics (without water) can be efficiently utilized to separate compounds based solely on their lipophilicity which often is the only differentiator with similar-structure compounds; some examples to follow.

In Figure 1, the separation of four fatty acid methyl esters is achieved using a gradient that runs from 50% methanol in water to 100% methanol. As you can see, retention is based on the number of methyl groups making up the lipid – more methyl groups equal more retention.  The first three compounds are saturated and provide little in the way of a UV chromophore while the fourth fatty acid contains a single double bond that does drastically improve its detection by UV (brown trace).  Wavelength focusing has helped detect them by UV (a previous blog topic) but for maximum sensitivity and to confirm compound identity I used in-line mass detection (Isolera™ Dalton) for fractionation. 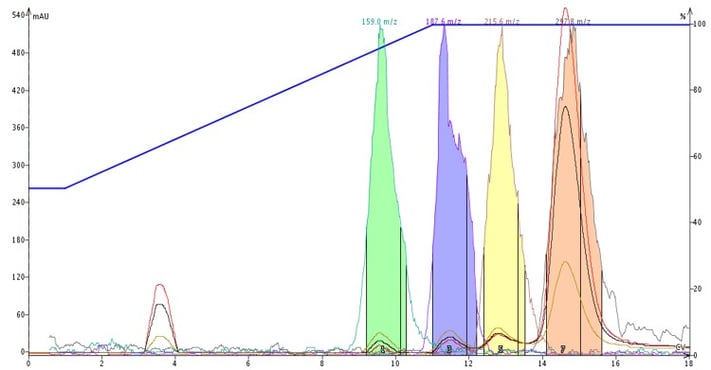 Figure 1. The purification of four fatty acid methyl esters is achieved using reversed-phase flash chromatography in a highly organic solvent system. A gradient of 50% to 100% methanol in water was used to separate these highly lipophilic compounds.

In Figure 2 I show another example this time where a fully non-aqueous reversed-phase method has been used successfully. In this case I separated ß-carotene from α-tocopherol using a methanol/ethyl acetate gradient.  These compounds can be separated on normal-phase but ß-carotene will elute at or near the solvent front, which may not be ideal as it could be contaminated with other non-retained compounds. With reversed-phase, the non-retained components are polar and will not interfere with the retained organic materials.

Figure 2. Non-aqueous reversed-phase purification of α-tocopherol (blue) and ß-carotene (yellow) using a methanol/ethyl acetate gradient. These compounds are highly non-polar requiring the use of normal-phase solvents for separation and elution from the C18 cartridge.

In a previous post on wavelength focusing I used another example of non-aqueous reversed-phase for the separation of methyl stearate and cholesterol, Figure 3. In this case, 100% methanol was used as the eluent and each of the components was retained, separated, and eluted.  Again, using normal-phase flash chromatography would not have provided as good of a separation as what was achieved here with non-aqueous reversed-phase flash chromatography.

Figure. 3 The separation of fatty molecules such as methyl stearate (yellow) and cholesterol (pink) can be achieved using non-aqueous reversed-phase chromatography. For this separation the solvent system was 100% methanol and the column was a 12 gram Biotage® SNAP Ultra C18.

The separation mechanisms in normal- and reversed-phase chromatography are different.  In normal-phase, compounds are retained, separated, and eluted based on the number and type of polar functional groups.  If there is little polar functionality and the compounds dissolve in alkanes then there is a reduced chance normal-phase will work.

With reversed-phase, the chromatographic separation is based on compound lipophilicity but polar functionality also plays a role as well.  The polar groups influence the partitioning kinetics.  In the examples above, there are few polar functional groups so the retention and selectivity generated are based almost solely on the carbon content which is why reversed-phase works for these types of molecules.

Reversed-phase flash chromatography media, C18 and others, provide tremendous flexibility for chemists.  Though traditionally used with methanol + water or acetonitrile + water, these versatile cartridges can be used with little or no water to purify the most non-polar molecules that will not stick or separate well on silica.