The value of in-line mass detection with flash column chromatography

For many chemists, flash chromatography with UV-triggered fractionation is part of their everyday workflow. Prior to flash chromatography, the reaction mixtures are either analyzed by TLC, analyzed by LC-MS, or both to ensure the targeted product has been synthesized. But, what if the reaction created a lot of by-products? How do you find your product in a sea of impurities? In this post, I will discuss how using a flash purification system with an in-line mass detector will simplify flash purification and isolate the target molecule or molecules.

Following on with the premise above, with confirmation that the product is present, the reaction mixture is purified with flash chromatography. Fractionation of UV-detected peaks isolates the product and by-products, which then requires the chemist to determine which fraction(s) contain the target molecule and its purity. If the reaction mixture is complex, as proffered above, there will be a lot of fractions to analyze.

As a case in point, I tried synthesizing 3-benzyl-2-phenyl-2,3-dihydro-4(H)-quinazolinone with a molecular mass of 314, Figure 1. 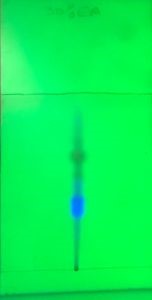 Figure 2. Reaction mixture TLC in 30% EtOAc shows the presence of many compounds, some fluorescent (blue).

Based on the TLC information, isolation of my compound using UV-directed fractionation would be challenging. Not because it is not detectable by UV 254 nm, but because of the number of UV detectable compounds. In order to have a chance of finding my compound, I used an in-line flash-ms system (Biotage® Isolera Dalton 2000) to help find and isolate it.

But, before I tried purifying the mix, I tested it with the Isolera Dalton 2000 to determine if my compound even existed. Yes, a mass of 315 was present (this is the molecular mass + hydrogen). However, several other masses were also detected including 227, 267, and 188; no surprise with this information.

I created a flash gradient method based on the TLC solvent mix (30% EtOAc/hexane). The gradient used was 7-60% EtOAc over 10 CV. With the reaction mixture highly complex, I opted to use a high-performance 10 g Biotage® Sfär column (20 μm particles) with a small load (dry loading with a Samplet® cartridge).

The UV-directed purification collected everything detectable within the specified wavelength range and, by monitoring the masses, I knew where the four masses of interest eluted. As it turned out, my product with a +m/z of 315 is hidden in the front of the strong UV peak with a +m/z of 227, Figure 3. 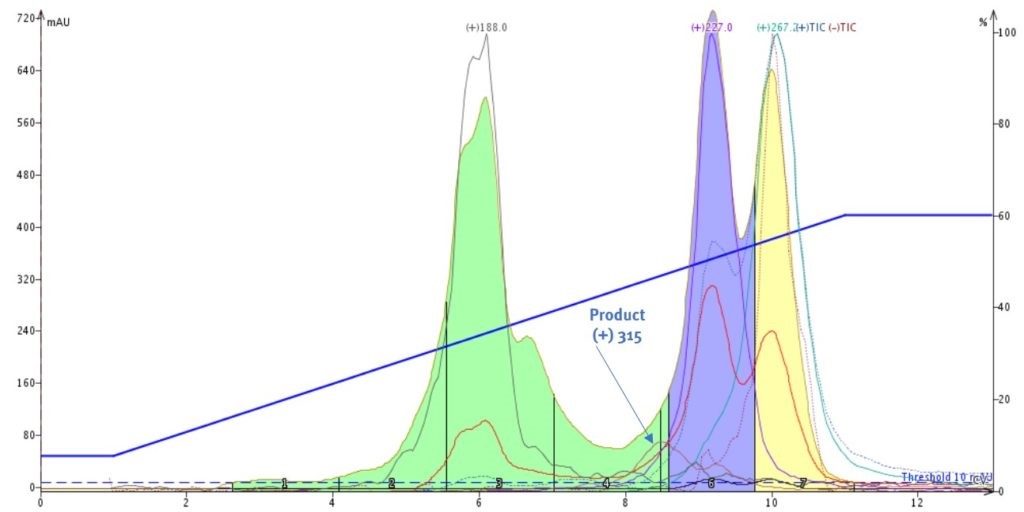 Figure 3. UV-directed flash chromatography with mass monitoring show the target compound hidden under the leading edge of a UV absorbing peak with +m/z 227.

However, repeating the purification with mass-directed fractionation allowed my product, and the other selected masses, to be fractionated into separate vials, Figure 4. This, in my opinion, is a better fractionation method. 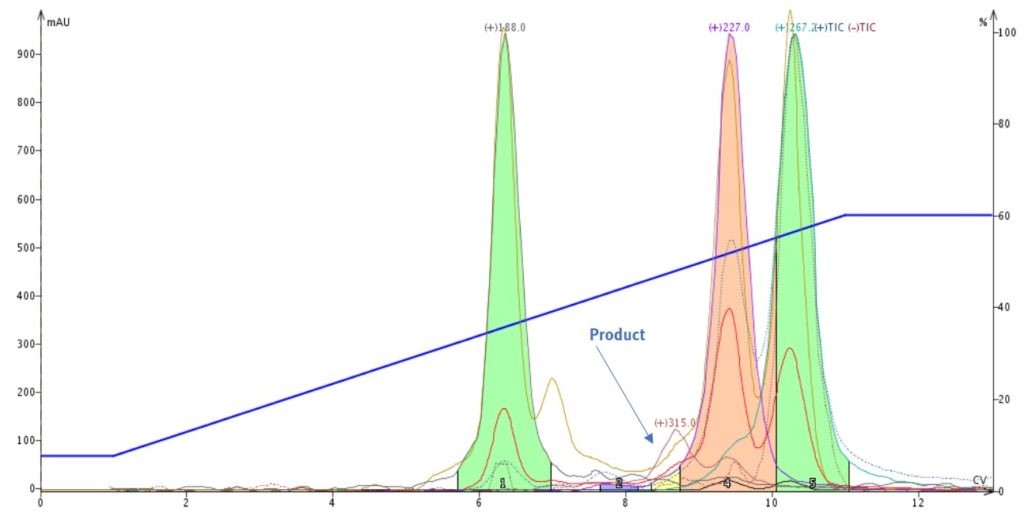 So, in my opinion, when you need to purify complex reaction mixtures (or even simple reactions), using a flash system with an in-line mass detector will simplify compound purification and isolate only the compounds you want. This will save you time and the extra expense of multiple post-purification analyses.

If you are interested in learning more about flash chromatography, please watch my webinar A Roadmap to Successful Flash Chromatography.