TLC is the tool most used for normal-phase flash chromatography method development. For many chemists, a solvent system of hexane (or heptane) + ethyl acetate is the first, and sometimes only, solvent system evaluated. Though often useful, ethyl acetate may not always provide the optimal purification conditions.

Chromatographic solvents can be classified in various selectivity groups. The selectivity of a particular solvent can and likely will influence a compound's retention vs. other molecules in the mixture. Performing two or three parallel TLC runs with different solvents will help identify which are optimal for a particular purification.

In normal-phase chromatography, paraffinic solvents  (like hexane and heptane) provide no selectivity and are used to dilute the polar solvent's concentration. For solvent scouting, evaluating solvent mixtures from different selectivity classifications can quickly provide chemists with the right solvents for the purification.

As a way to highlight solvent choice impact on separation performance, three TLC plates with three solvents were developed for the separation of a 5-component mix. One plate was developed with 20% ethyl acetate in hexane (EtOAc is a class VI solvent), a second plate was developed using toluene (Class VII), and a third plate developed in dichloromethane (DCM, Class V).

As seen by the data, hexane/ethyl acetate separates each compound but the resolution/selectivity between the spots is tight, which limits sample load quantity. The product of interest in this mix is the compound in the middle of the hexane/ethyl acetate separation (Rf=0.47). In toluene and DCM, the compound of interest is fully separated from all other compounds, but in toluene it elutes at an ideal spot (Rf=0.32) vs. an Rf of 0.7 in DCM, Figure 1. 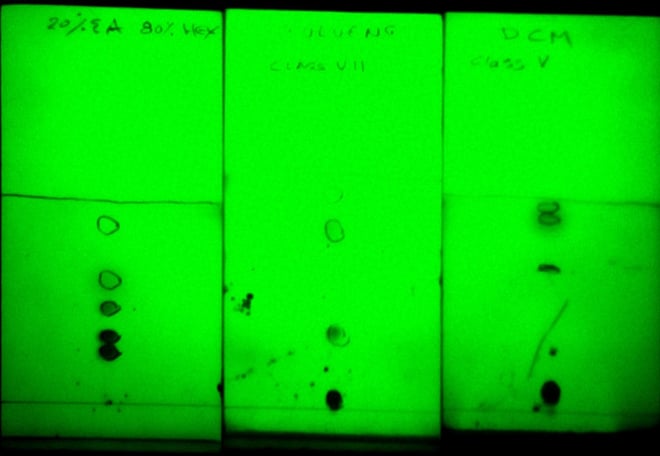 For this particular mixture, toluene is the correct mobile phase and will maximize loading capacity and throughput.