Purifying polar organic compounds can be very challenging. In a previous post I have discussed using reversed-phase flash chromatography to retain and purify ionizable and ionic compounds.  My colleague, Dr. Elizabeth Denton, has also posted a blog on purifying very polar peptides as well.  Sometimes, however, despite all your efforts with reversed-phase, success is elusive. When this happens, what do you do?

In this post I will discuss using normal-phase flash chromatography with aqueous solvents, a form of HILIC (hydrophilic interaction liquid chromatography), to purify those compounds that just will not stick well enough on reversed-phase media.

Normal-phase chromatography is more than just silica and organic solvents.  Other normal-phase media exists, such as polar bonded phases.  An example of such a media is a propyl amine bonded silica.

This media is quite unique with the amine functional group capable of performing ion exchange as well as creating a “base shield” to minimize compound–silica interactions when purifying organic amines.  But in this post I want to talk about how this media can be used to retain and separate really polar, water-soluble compounds such as carbohydrates.

Carbohydrates can be especially challenging to purify chromatographically.  Their highly polar chemistry minimizes the amount of partitioning that might be possible with reversed-phase chromatography. Simple sugars will typically elute at the column’s void volume though higher saccharides may sometimes be retained.  By flipping the separating mechanism, from partitioning with reversed-phase to H-bonding (in this case) with hydrophilic interaction, using an amine-bonded silica can be a successful purification strategy.  There is an interesting twist with this type of separation - although reversed-phase solvents are used, water -- rather than acetonitrile (or even methanol) used in reversed-phase-- is employed as the strong solvent! The result, highly polar compounds are retained well, thereby enabling chromatographic separation of crude mixtures.  The table below summarizes the differences between HILIC and both reversed- and normal-phase chromatography.

Saccharin is found in the artificial sweetener Sweet & Low® and is combined with dextrose and calcium stearate.  For my evaluation, I mixed some sucrose with one packet of Sweet & Low and simply dissolved them in some water to create a crude mixture that I could test my chromatographic separation.Recently, I had the opportunity to perform carbohydrate purifications during a project I was conducting.  In this project I looked at the ability of flash-grade media to separate sugars and sugar substitutes.  I just grabbed common items found in my kitchen (or at most any restaurant) - table sugar (sucrose) and an artificial sweetener (saccharin).

Since carbohydrates are UV transparent, I used a mass detector (Isolera Dalton® 2000 with ESI or electrospray ionization source) to detect the compounds.  The method I found worked best, without any additional pH optimization, was a quick 20% to 40% water in acetonitrile gradient with a Biotage® SNAP cartridge I packed with Biotage ISOLUTE® NH2 media, Figure 1. This combination of polar solvents and a polar stationary phase is sometimes referred to as HILIC (hydrophilic interaction liquid chromatography). 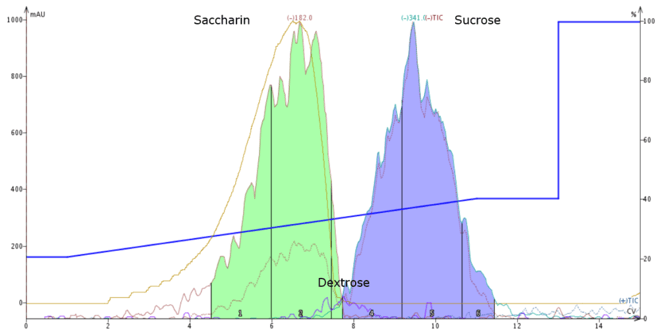 When using amine-bonded silica for carbohydrate separations, the sugars tend to be retained to various extent, based on the number of hydroxyl groups available for polar stationary-phase interaction. Smaller sugars elute earlier than larger sugars, which contain more hydroxyl groups. In the example above, dextrose, a monosaccharide elutes slightly earlier than sucrose, a disaccharide. Saccharin, which is more hydrophobic, elutes even earlier.

Have you ever needed to explore HILIC for purification of really polar compounds?  Share your experiences with us.