When should I choose APCI or ESI for my flash column chromatography?

Mass spectrometers today are typically available with either Electrospray Ionization (ESI) or APCI (Atmospheric Pressure Chemical Ionization) sources.  That’s really nice but, how do you know which source will work best when purifying your sample?

In this post I attempt to provide some guidance to selecting the ionization source best suited to your sample types.

While most chemists find UV detection with flash chromatography suitable for detecting sample components, there are times when “seeing” compounds in your sample just is not good enough. Yes, an ELSD will see more compounds than UV, but neither will tell you the compound’s molecular weight – an important part of determining if your compound is actually in the sample, or answering the questions - What is the identification of the individual peaks eluding from my flash column? What have I actually isolated?

Now that flash chromatography systems with in-line mass detection are a reality, obtaining the sample components’ masses in real time is possible, which is a major time saver.  Depending on the manufacturer, flash chromatography mass detectors sometimes are available with ESI and/or APCI ionization sources.  While having a choice is great, how do you know which to use?

I wanted to find the answer to this question so I performed some tests using a Biotage® Isolera™ Dalton 2000 system.  This mass detector is available with either an APCI or ESI source (I found they are easily interchangeable).

One of the first things I did, however, was to look for some help with determining when to use ESI and when to use APCI.  I found a good presentation by Dr. Robert Voyksner that explains that ESI is typically better for polar and ionizable compounds like peptides and carbohydrates while APCI works best for neutral or more lipophilic compounds. I wondered, did this always hold true and what about mixtures containing both polar and neutral compounds?

Armed with this basic detection rationale, I performed a few experiments of my own including a synthetic peptide, two natural product extracts, and pharmaceutical compound mix – just to see for myself.

ESI is most commonly used with HPLC-MS and UPLC-MS systems.  For flash column chromatography, ESI makes sense but, unfortunately, it will not detect everything. As mentioned earlier, ESI works best with polar and/or ionizable compounds.  So I tried it for a synthetic peptide called 18A with a molecular weight of 2200. 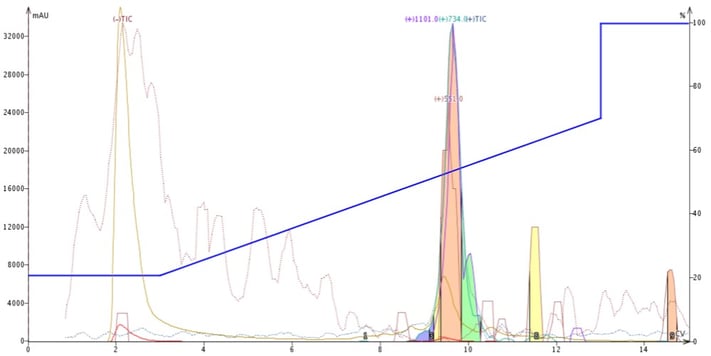 Another compound class, tricyclic amines, posed an interesting question - do I use ESI since these compounds are ionizable (available as salts) or should I use APCI because they are quite lipophilic (organic soluble).

Using an amine-functionalized silica cartridge (Biotage® KP-NH) and a hexane/ethyl acetate gradient, these three pharmaceutical compounds trimipramine (MW 294), amitriptyline (MW 277), and promethazine (MW 284) are successfully separated and detected with ESI, Figure 2. So, although quite lipophilic, these compounds are detectable by ESI because of their ionic functionality.

APCI is designed for lipophilic and neutral compounds so to validate this I tried purification of some organic soluble natural products.  Figure 3 shows the resulting flash separation of a Kanna extract*, which contains psycho-active alkaloids mesembrine and mesembrenone among other components such as fatty acids.  Though detectable with ESI, I found better responses with APCI.

Figure 3. Sceletium (Kanna) extract purified using reversed-phase flash chromatography and a methanol/water/ammonium hydroxide gradient. MW 288 is mesembenone and MW 290 is mesembrine. MW 363.8 is unknown but suspected to be linolenate as the ACN+H2O adduct. MW 331 is the acetonitrile adduct of mesembrine.

Lastly, I evaluated another plant extract - carrot seed oil, Figure 4.  This extract contains many compounds, most of which are terpene-based. The most abundant compounds in the extract are carotol (MW 222), caryophyllene oxide (MW 220), as well as myriad terpenes.  Interestingly, I learned that these two compounds, among a few others, do fragment into smaller masses and some form adducts, even adducts from their fragments, as in the case of caryophyllene oxide! So, I was able to determine that carotol loses water (MW of 18, of course) and has a detected ion mass to 205 (222-18+1) and that caryophylene oxide also loses water (220-18+1) to be detected as MW 203.

I evaporated the flash purification fractions using a Biotage® V-10 Touch evaporator for mass verification.  Using a solids probe called ASAP® (Atmospheric Solids Analysis Probe), I was able to quickly confirm some compounds' IDs without having to run HPLC-MS on any fractions I collected. In particular, caryophyllene oxide was one such isolated compound I confirmed.  As mentioned earlier, adducts are detected for some compounds (helping to absolutely identify them) and this was confirmed with caryophyllene oxide which showed a strong m/z of 262 (220+41+1) when the dried fraction was analyzed. 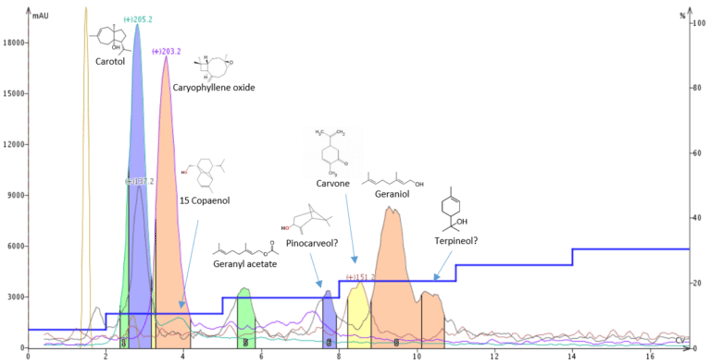 So, for routine medicinal chemistry flash chromatography, both sources should be considered.  Organic amines, especially basic amines, can be easily detected using ESI while for compounds with more lipophilic properties, APCI should be considered. For reaction mixtures containing a variety of polar and neutral compounds, APCI may be preferred in order to understand what are all the compounds present and fraction sampling (with ASAP) to rapidly identify each.

In the natural product research world, APCI may be most useful as it can detect terpenes, which are found in many plant extracts.

What are your experiences using in-line flash chromatography-mass spectrometry?

Interested in learning more about flash chromatography?  Please download our whitepaper Successful Flash Chromatography by clicking the link below: