Has my peptide undergone an aspartimide rearrangement?

Side reactions.  Words that cause a little shiver to run down every peptide chemists’ spine.  As peptide chemists, we worry about both chemical side reactions like diketopiperazine or aspartimide rearrangements, and secondary structure formation as causes for failed peptide syntheses.  But how do you know what to look for?  What is a susceptible sequence and how can you confirm if one of these structural rearrangements has occurred?

In today’s post, I’ll discuss a couple strategies that have been published that illustrate how to identify if an aspartimide rearrangement has in fact occurred during your peptide synthesis.

As a young graduate student, I ran into a problem.  I was working with a peptide that displayed batch-to-batch variations in activity when evaluated against a receptor over-expressed on the surface of a mammalian cell, Figure 1.  There was no significant retention time shift in my analytical HPLC after purification and I only saw the desired peptide mass. So what was going on? 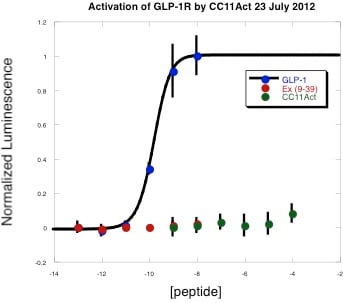 Figure 1: GLP-1R is potently activated by its cognate ligand GLP-1 (blue circles), not the antagonist exendin-4 (9-39) (red circles) and not by CC11Act (green circles), a synthetic peptide mimetic that had previously stimulated receptor activation.

After a bit of reading, I began to suspect that my peptide had undergone an aspartimide rearrangement, inserting an isoAsp bond into the peptide causing a reduction in the peptide’s overall efficacy against the receptor of interest, Scheme 1.  This is a well known isomerization reaction, documented as early as 1979, that has a sequence-dependent probability of occurring during synthesis. 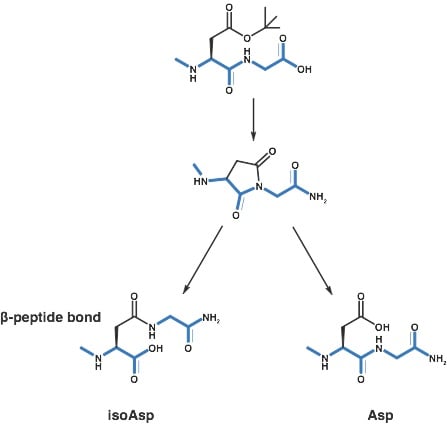 Scheme 1: Formation of an isoAsp bond through a succinimidyl intermediate during Fmoc-based peptide synthesis.

IsoAsp is particularly difficult to detect in peptides for 2 key reasons:

What I needed was a quick and reliable method to characterize each synthesis batch of this peptide to determine if in fact this an isoAsp was present in the peptide.  Ideally, the method would be relatively quick, reliable, and HPLC-MS compatible for analysis.  The literature presented several strategies including the use of enzymes and HPLC-MS, enzymes with both heavy and radio isotopes, or alternative ionization methods.   Below is a brief summary of some useful strategies for detecting and quantifying isoAsp in peptides and protein samples, Table 1.

*This strategy has been employed using a variety of isotopes.

Ultimately, I worked out a method combining Asp-N endoproteinase digestion followed by UPLC-MS analysis.  Although this strategy does cost sample (the desired peptide is destroyed in the digestion), I was able to complete a small scale digestion and follow up analysis in about 2 hours.

After working out the appropriate conditions for the digestion I circled back to the beginning and applied this additional level of characterization to the peptide sample shown above.  As I suspected, the sample contained significant amounts of undigested peptide product, Figure 2,  leading to the conclusion that the isoAsp-containing peptide caused the decrease is detectable peptide activity.

So now the question arises:  how do I prevent this from happening in the first place?  Stay tuned for that discussion in a future blog post.

How have you detected the presence of isoAsp in your peptides?

To learn more about Biotage tools designed to improve your peptide workflow efficiency, click the link below.