How do I choose my resin for peptide synthesis? {Part 1}

It used to be easy with only polystyrene based resin types, but nowadays there is a broad choice of types to choose from, including everything from the C-terminal functionality (Rink vs Wang) to the polymer from which the resin itself is synthesized.

All resins have one thing in common, and that’s the reactive site loading level. In this post, I will share my experiences with how this important factor impacts the success of peptide synthesis.

The success or failure of peptide synthesis on solid support depends on many factors. A significant contributor is the resin on which the peptide will be synthesized. For me, one major consideration is the choice between high-loading and low-loading levels of functionalization.

I can think of several reasons why the use of high-loading resin would be attractive for your peptide synthesis efforts. First on my list is the potential for a larger scale peptide synthesis – thinking higher quantities of peptide per synthetic effort. But what does the peptide have to say about this? Will the crude purity suffer and require greater purification effort?

I have come across several papers that discuss altering the resin loading capacity as part of their synthesis optimization. Historically, I have always used low-loading resin, so I thought an apples-to-apples comparison was in order.

I chose to synthesize a peptide called 18A, an amphipathic peptide composed of 18 amino acids with some inherent helical propensity. The principle argument for choosing a low loading resin is to prevent interchain entanglement during peptide elongation, so I thought a long-ish peptide would more clearly highlight any effects due to the resin loading.

I synthesized 18A first using preloaded Fmoc-Gly-Wang polystyrene resin with 0.7 mmol/g loading using a Biotage® Initiator+ Alstra™. I used standard DIC/oxyma coupling reagents, single couplings, and double Fmoc deprotections (both at room temperature) for the synthesis. While I consider 0.7 mmol/g loading to be relatively high, especially for polystyrene-based resins, I have certainly seen higher loading levels on commercially available resins. Using a preloaded resin enabled me to eliminate any observed synthetic inefficiencies due to the first amino acid coupling.

HPLC analysis showed that while the desired product is contained in the main peak there are several peptidic contaminants present, which bring the overall crude purity down to about 67% based on peak integration, Figure 1. Well that’s a little disappointing… 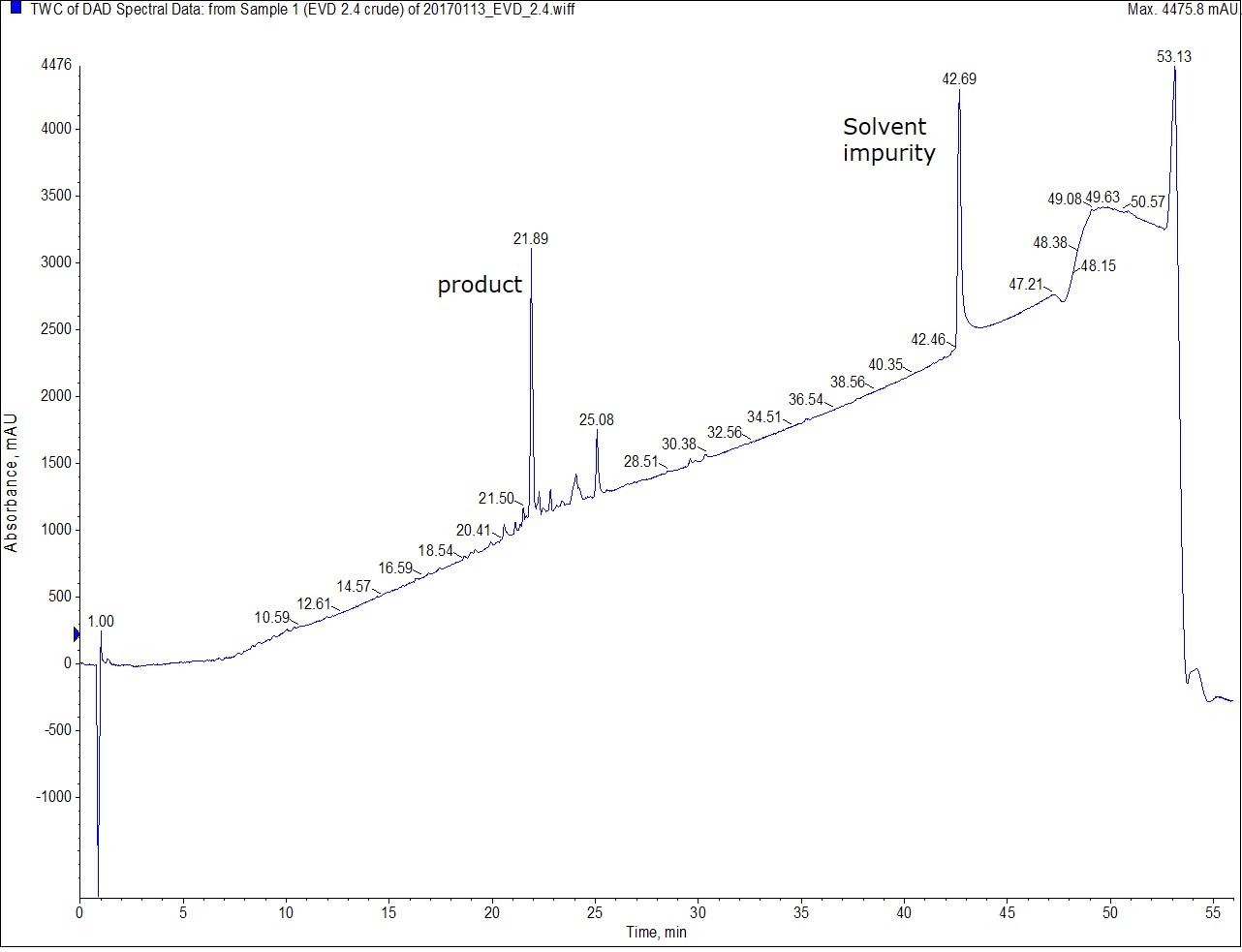 So I then synthesized 18A using the exact same coupling and deprotection strategy on my Biotage Initiator+ Alstra, this time with Fmoc-Gly-Wang polystyrene resin preloaded with 0.33 mmol/g glycine, roughly half the previous loading level. This loading level is much more reminiscent of the resin loading I used as a young graduate student. However, I have seen commercially available resins and worked with groups using resins with significantly lower loadings than this as well.

The desired product is again contained in the main peak of the crude analytical HPLC chromatogram, Figure 2. Decreasing the loading level though, increased the crude purity to approximately 89%! A significant improvement over the previous synthesis.

While the 18A peptide requires a relatively straightforward synthesis, the results clearly demonstrate that the relative loading level of the resin can have dramatic, detrimental impacts on the crude purity peptide synthesis, requiring greater purification time and effort. These effects will likely only be exacerbated as the peptide chain length increases. So with that, I recommend using low-loading polysytrene resin if you plan to synthesize mid to long peptides.

Have you ever changed your resin loading and improved your peptide synthesis yield?

To read up on part two of this blog, follow the link below: