How do I choose my resin for peptide synthesis? {Part 2}

Resins for solid phase peptide synthesis can vary significantly in both functionalization and composition, leading to mixed results at the end of a synthesis.  Previously, I demonstrated how the resin loading level affects the success or failure of your peptide synthesis.

In today’s post, I’ll highlight how both the hydrophilicity and swelling capacity of your resin can influence your peptide synthesis.

It is important to recognize that as the peptide chain continues to grow, the probability for secondary structure formation or aggregation increases.  One way to improve your crude yield is to use a resin with a low loading level.  Alternative resins though, with higher swelling capacity and composed of cross-linked polyethylene glycol polymers to increase the overall hydrophilicity rather than cross-linked polystyrene polymers are also gaining more attention, Figure 1.

To explore the differences in these types of resins more thoroughly, I referred to Garcia-Ramos, et. al. and their initial description of ChemMatrix® resin.  In that paper, they synthesized Thermolysin α1, a 28 amino acid peptide that has a known aggregation propensity, making a successful synthesis remarkably difficult.  While Garcia-Ramos synthesized this peptide manually, carefully monitoring every chemical step, I sought to investigate a fully automated synthesis of this peptide.

Using my Biotage® Initiator+ Alstra™, I prepared to synthesize Thermolysin using polystyrene-based resin.  I chose a resin functionalized with 0.6 mmol/g Rink amide linker.  While not a low loading resin like I described previously, this loading level is similar to the loading level of the ChemMatrix resin I’ll discuss later.  I decided to use DIC and Oxyma Pure as my coupling reagents and single couplings at 75°C for 5 minutes for the synthesis, Figure 2. 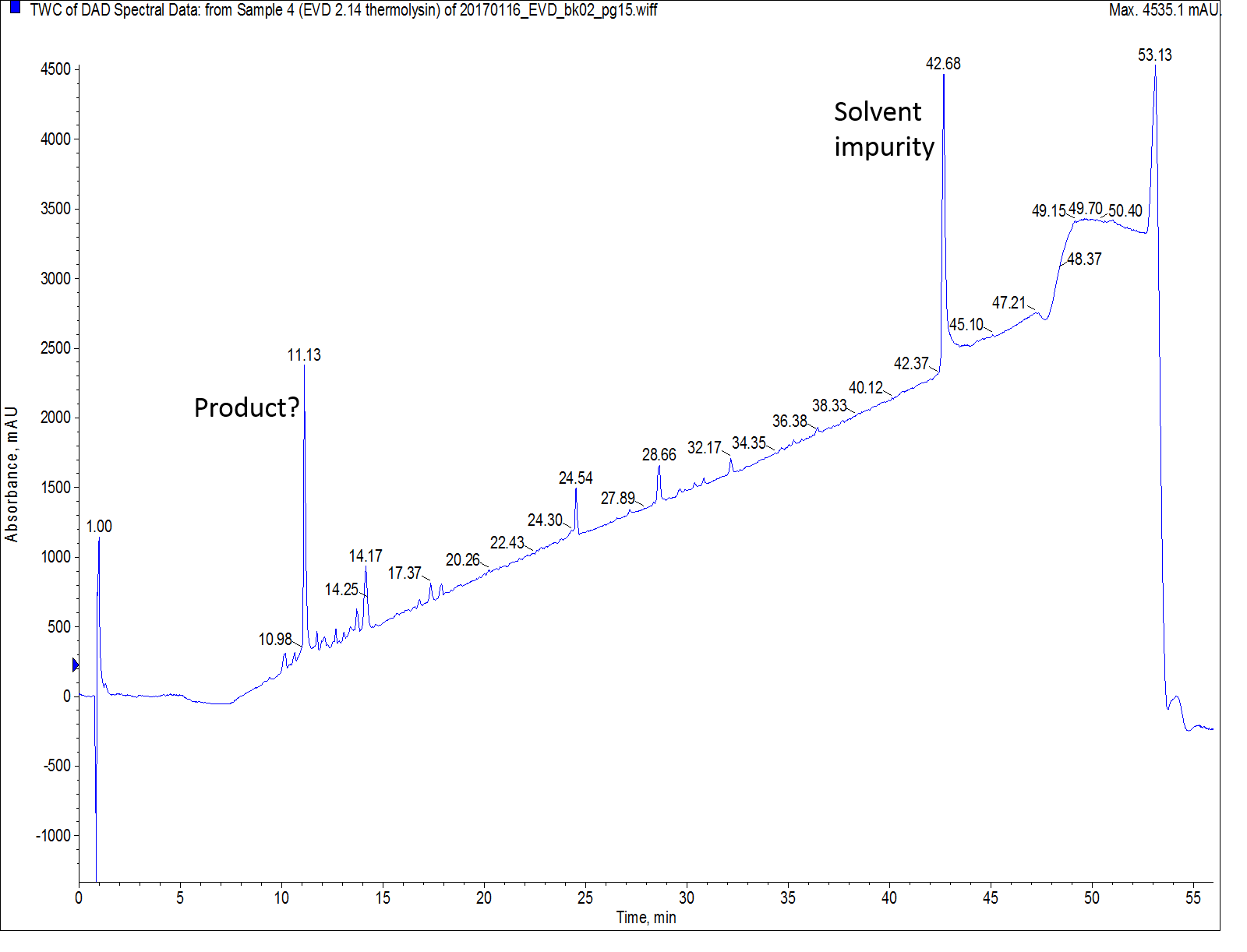 At first glance the crude UV trace looks promising.  However, the mass spectrum tells a different story.  While there is trace signature of the desired peptide product, the most abundant ions are related to a peptide that is 112 Da lighter than the desired peptide, likely caused by an Ile deletion, Figure 3. 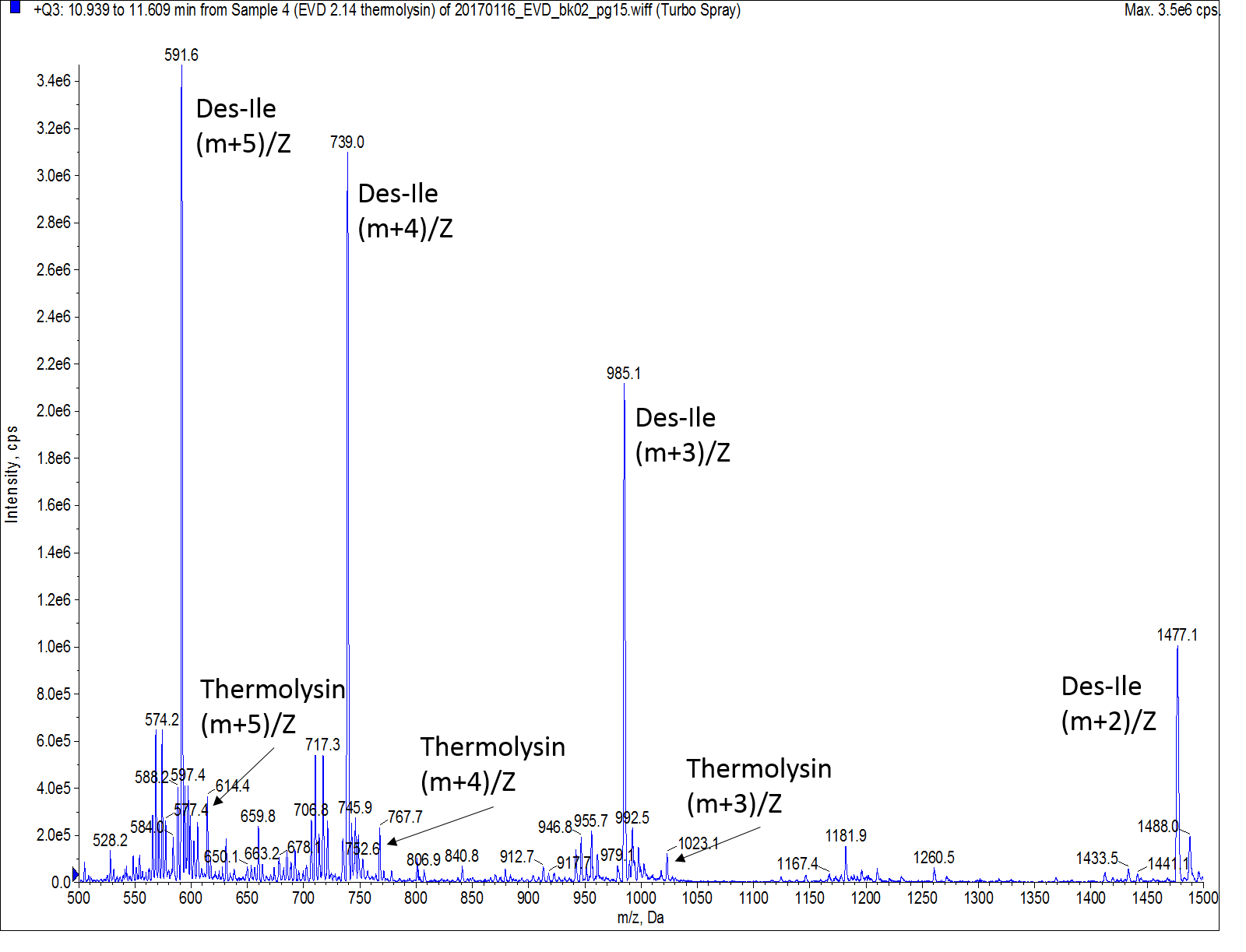 Figure 3: Mass spectrum of the main peak present in the UV and TIC. Most intense ions present suggest that the predominant product is a des-Ile deletion product, and not full length Thermolysin

So with this information in hand, I repeated the synthesis.  I used exactly the same coupling methods and conditions as before, only this time I chose the high swelling, hydrophilic ChemMatrix resin loaded with 0.44 mmol/g Rink amide linker.  Initial inspections of the crude UV trace left me a bit concerned.  While the overall sample content looks better, the main peptide peak has a retention time nearly identical to the peptide evaluated first, Figure 4. 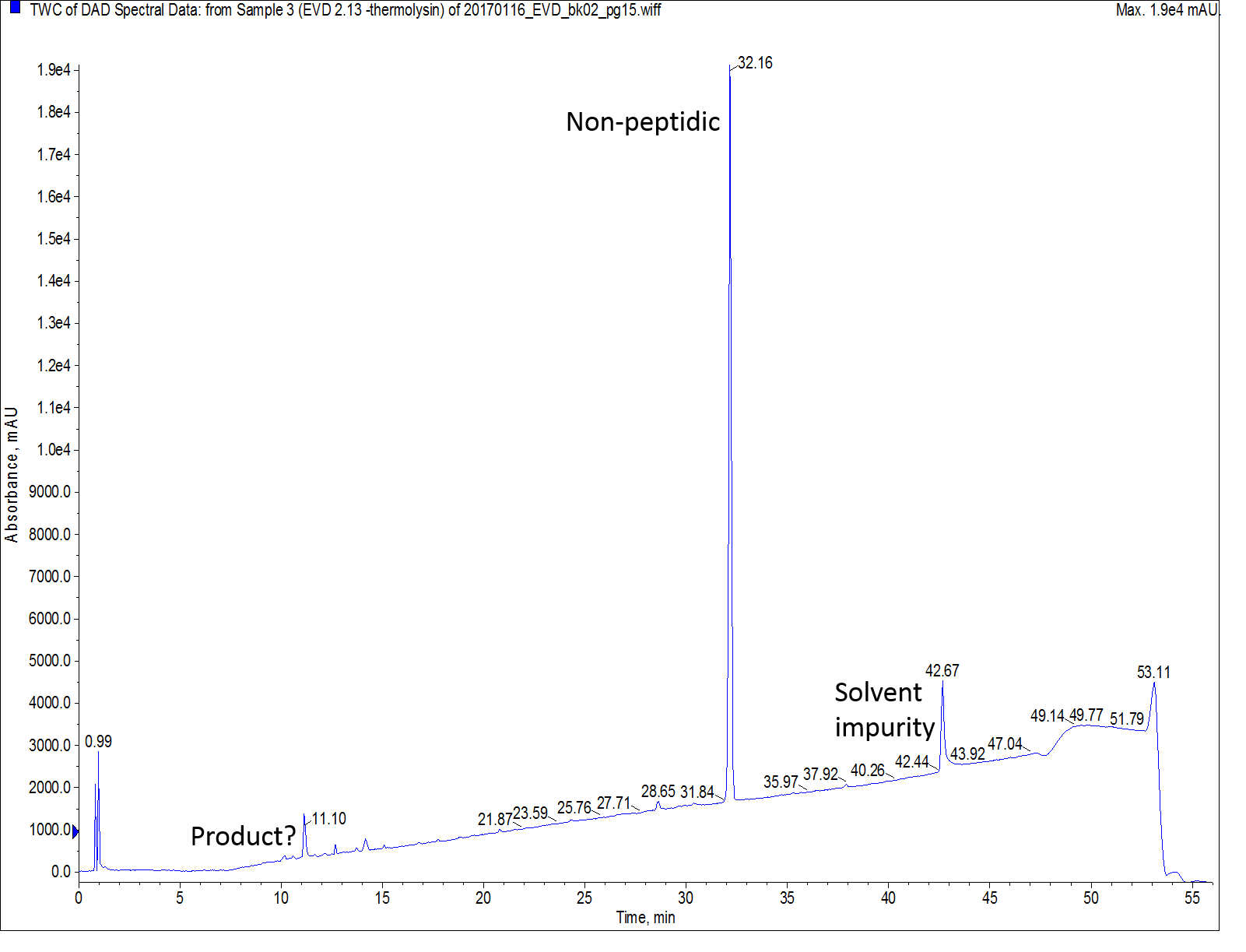 Figure 4: Crude analytical HPLC UV trace for Thermolysin synthesized on ChemMatrix resin. The large impurity peak is likely due to the presence of residual protecting groups in the sample. These peptides are not precipitated into ether prior to HPLC analysis.

Taking a closer mass spectrum though, I found that the predominant total ion peak did in fact contain the full length Thermolysin peptide I desired, Figure 5.  Using the UV trace, I calculated that the crude peptide is about 65% pure when excluding the non-peptidic impurity (this is most likely the result of residual protecting groups in the crude solution). 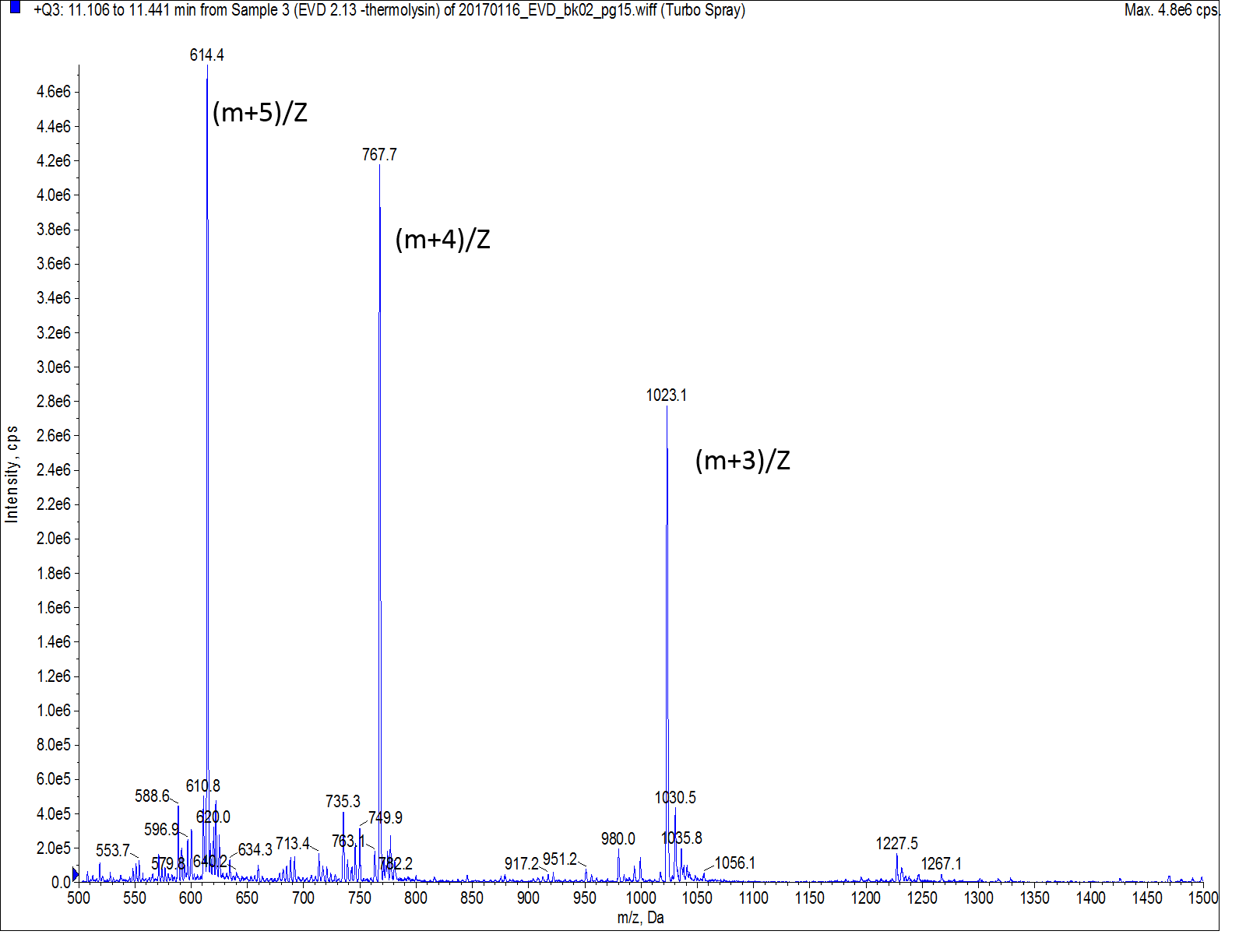 Figure 5: Mass spectrum of the main UV and TIC peak for crude thermolysin synthesized on ChemMatrix resin. The predominant peaks indicated that the most prevalent species is in fact full length Thermolysin.

So what’s going on?  There are really two things at play here.  The first is that ChemMatrix resin swells to a much greater extent than polystyrene resin.  This positions the functional groups further away from each other in space, reducing the potential for interchain aggregation as the peptide grows.  The second factor is the hydrophilicity of the polymer itself.  Polystyrene-based resins are extremely hydrophobic, almost encouraging the peptide to interact with the resin  rather than stay extended in the solvent.  Peg-based resins though, have ethers decorating the surface, a much more hydrophilic presentation that repels  the growing peptide chain thereby improving the probability that the synthesis will be successful.

Most importantly, this data highlights how critical resin selection can be when synthesizing a new peptide.  Without any further chemical optimization, I was able to synthesize a relatively long peptide with known aggregation potential successfully simply by altering my resin of choice.  In the future, I’ll definitely be using ChemMatrix®, or some other Peg-based hydrophilic, high swelling resin.

What other resins have you had success with synthesizing difficult peptides?

To learn more about how ChemMatrix® resins can be used to synthesize complex peptides, follow the link below.