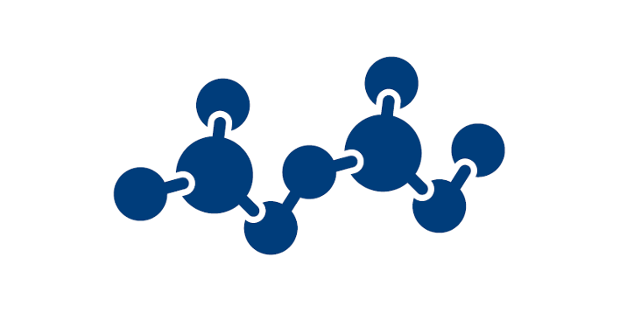 In this post, I’ll utilize ion pairing agents to enable rapid peptide purification by flash chromatography.  The use of ion pairing agents can in fact alter the peptide’s apparent hydrophobicity sufficiently that the desired peptide and it’s closely eluting impurities can be resolved.  The question is, which one to choose?

Ion pairing agents are particularly useful for peptides that are difficult to purify.  As I’ve already discussed, altering the mobile phase modifier can increase your peptide’s retention on the column.  Importantly though, they can also change the retention profile of the peptidic impurities that are often associated with solid phase peptide synthesis.

I synthesized a 33 amino acid peptide that, after crude analytical HPLC, likely contains a closely-eluting impurity.  There is evidence to suggest that ion pairing agent can enable simplified purification of peptides that differ by a single charge state, so I thought I would give it a try.

One word of warning before I delve into the actual experiments.  Be careful when choosing your ion pairing agents.  With increasing size comes decreasing volatility and the larger ion pairs can in fact stick to quadrupoles, leading to crossover contamination in your mass spectrometer. They’re also very difficult to clean out.

With this in mind, I chose to compare the purification efficiency of mobile phase containing 0.1% TFA (keep in mind, I almost exclusively use formic acid as my mobile phase additive for typical peptide purifications), 0.1% heptafluorobutyric acid (HFBA), or 0.1% perfluoropentanoic acid (PFPA) added to the mobile phase solvents using my Biotage® Isolera™ Dalton 2000.  There is some discussion in the literature as to whether or not you should keep the molar equivalents constant or simply maintain the total ionic strength when comparing ion pairing purification efficiencies.  I decided for this comparison to keep the ion strength constant.

The peptide elutes relatively late, about 50% MeCN, so I decided to start with PFPA to ensure I could still elute the peptide during the linear regime of the gradient.  When I’ve purified this peptide in the past I have ended the gradient at about 70% MeCN before flushing off the column.  Just to be safe, for this purification I extended the gradient up to 90% MeCN and increased the number of total column volumes to keep the gradient slope roughly the same, Figure 1. 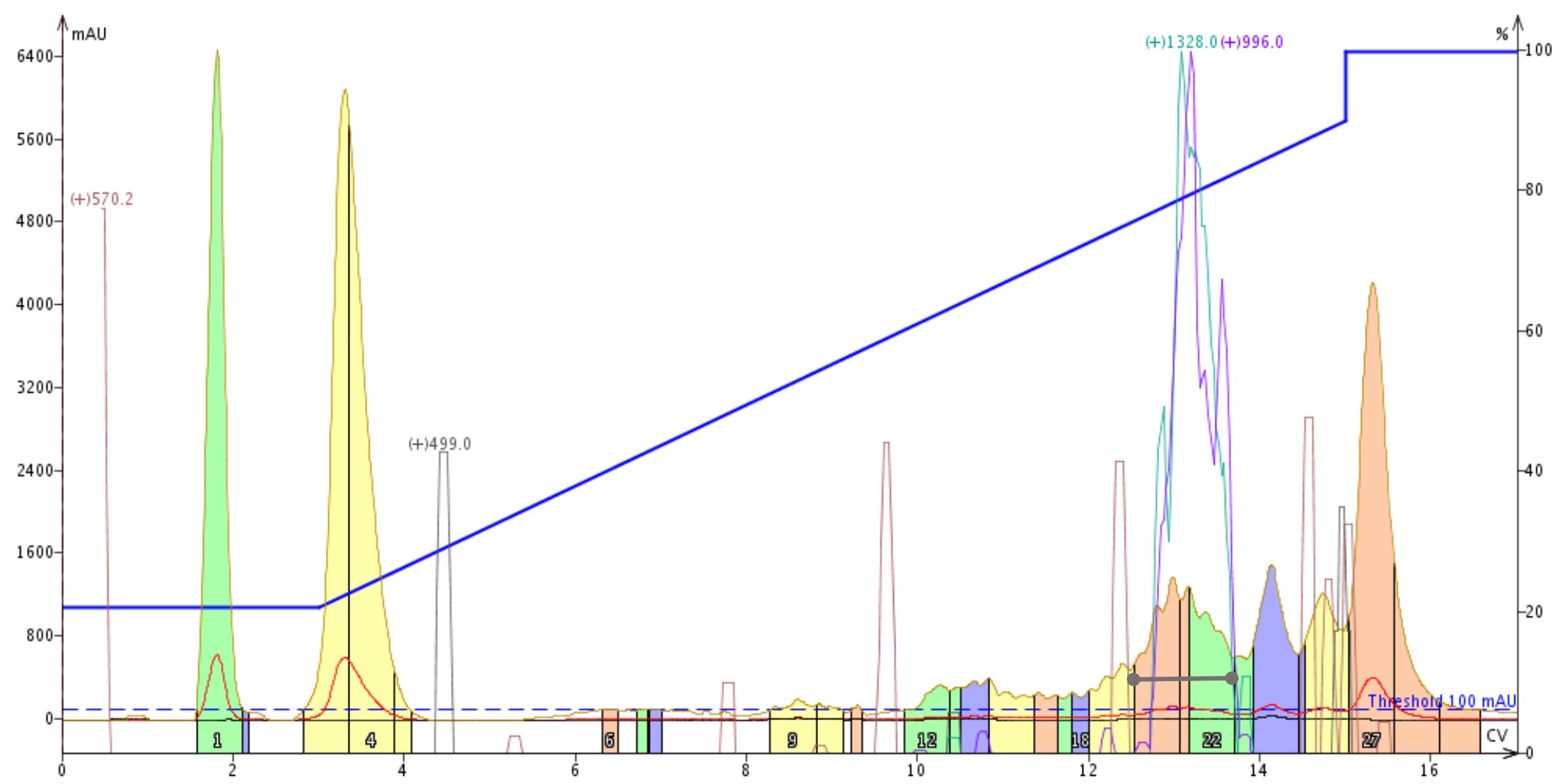 Figure 1: Purification of a 33 amino acid peptide using perfluoropentanoic acid as the mobile phase modifier. The desired peptide elutes at approximately 13 column volumes as indicated by traces for the m+4 (teal) and m+5 (purple) mass traces.

Phew!  Without that gradient extension the peptide would have surely eluted in the final column flush, eliminating any purification whatsoever.  The peptide is still separated from the later eluting contaminants, although the peak width is a little concerning.  Was I able to separate the closely eluting impurity at all?  With help from the mass detector, I decided to combine and evaporate fractions 20-22 for final purity analysis.

I next moved to HFBA as my mobile phase modifier.  I kept the gradient the same as the previous run, confident that the peptide would be eluted and separated from the other impurities, Figure 2.  The desired peptide does elute earlier than the previous purification effort, as expected, given that HFBA is slightly less hydrophobic that PFPA.  In this case though, the peptide is significantly more resolved from the major contaminating species, suggesting a higher final purity.  After careful analysis, I decided to combine and evaporate fractions 27-29 for final purity analysis. 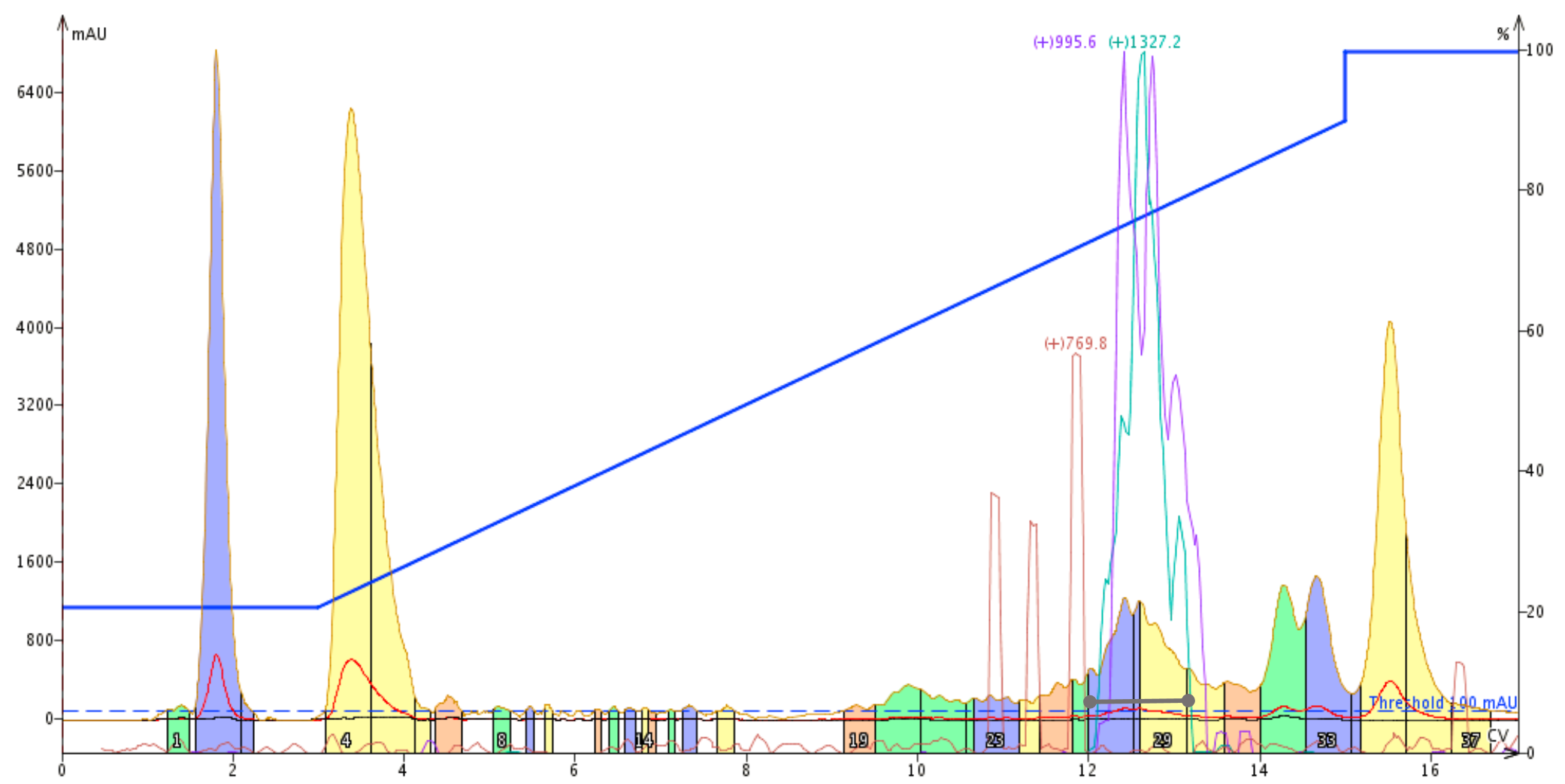 Finally, I used TFA in the mobile phase, Figure 3.  As expected, the desired product elutes the earliest of all the ion pairing agents.  In this case though, the minimal hydrophobicity alters retention of all components of the crude sample mixture sufficiently that both a leading a trailing shoulder are resolved from the desired product peak.  Using the extracted ion traces as a guide, I combined and evaporated fractions 18-20 for final purity analysis.  Interestingly, the peptide elutes with a similar volume (peak width) in all three experiments.  In the past, I have observed peak broadening with the more hydrophobic ion pairing agents, as they typically pair less efficiently than TFA. 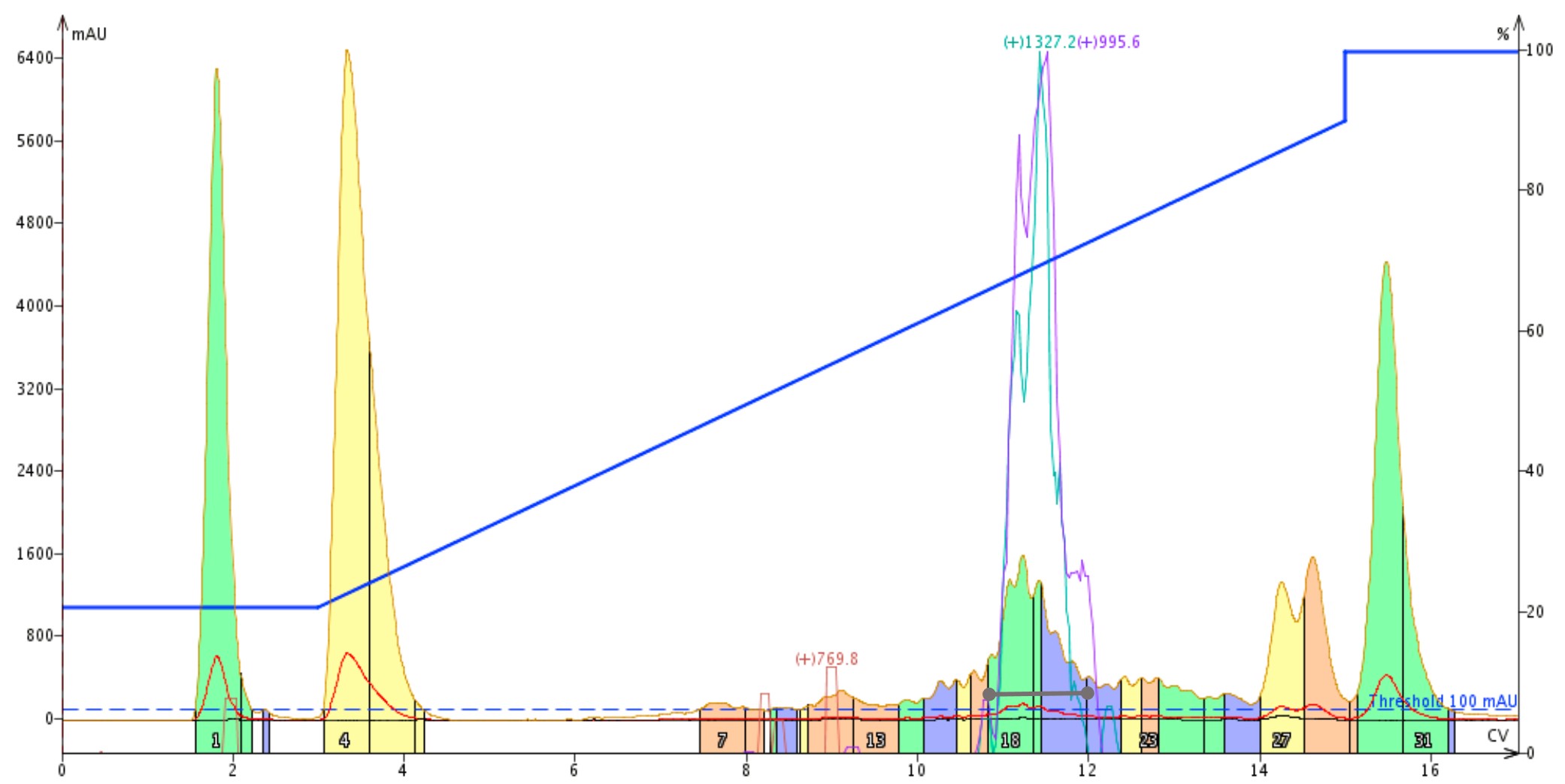 So, I purified the same crude peptide using 3 different ion pairing agents and observed different chromatographic behavior in each experiment.  But which was most effective and was I able to remove the closely-eluting impurity I mentioned previously?  When comparing the analytical HPLC-MS, it becomes abundantly clear which samples are the cleanest, Figure 4. 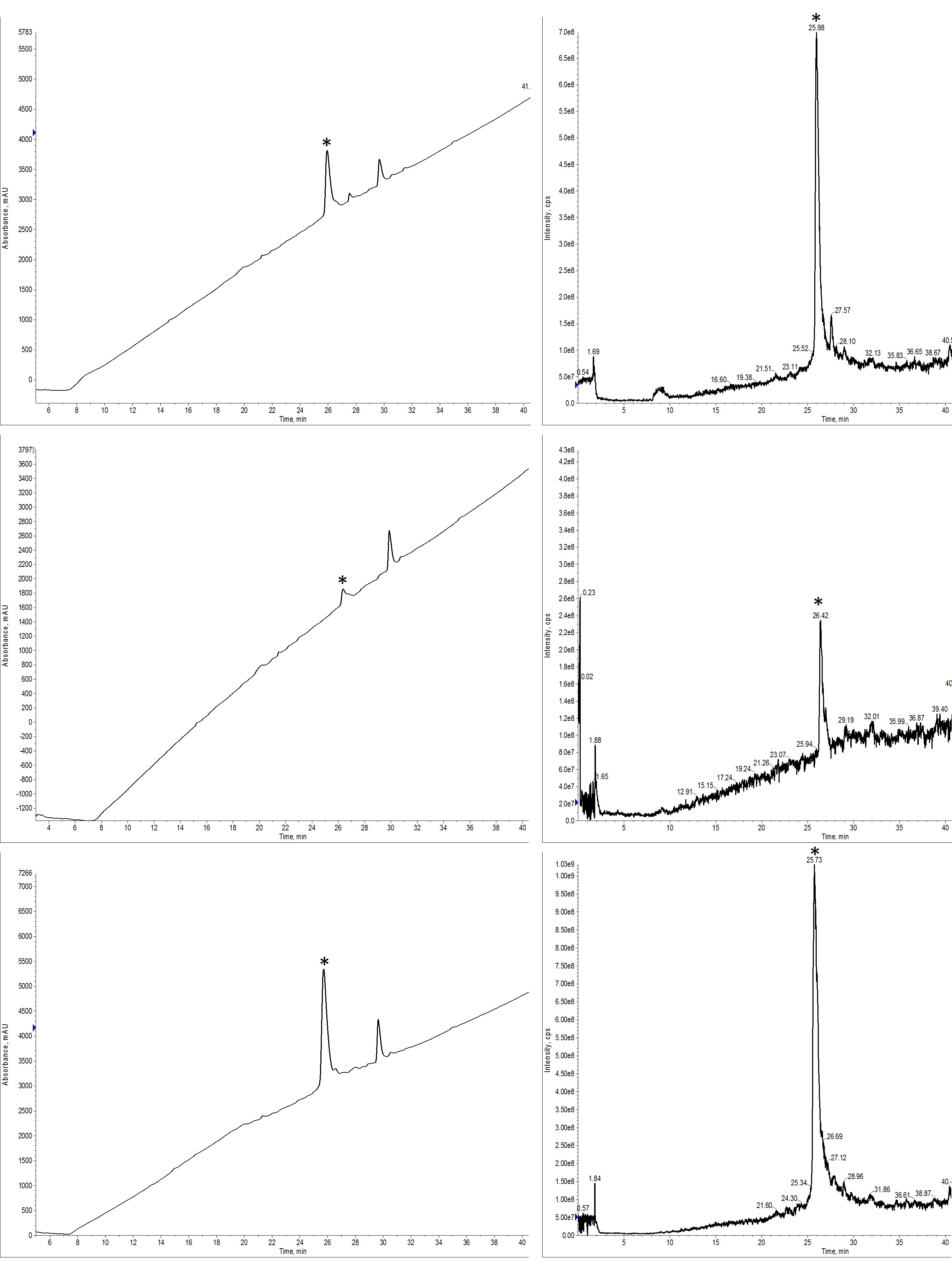 Although we can’t quantify the total purity of the sample using the TIC trace, this gives us the clearest picture of what’s actually in the solution after purification and is closely reflected in the UV chromatogram.  As expected, the TFA-modified sample yielded the highest purity final product.  Interestingly though, the PFPA-modified sample comes in second place.  Given the purification chromatography and the minimal resolution, I would have expected this sample to be the dirtiest.  However, for the HFBA-modified sample, the trailing impurity is readily identifiable in both the MS and UV traces.  Although the product peak is much more resolved from the significant impurities using HFBA, the analytical suggests that the pairing strength is not sufficient to resolve the closely-eluting impurities.

When have you tried to use ion pairing agents for your peptide purification?