As a chemist new to the peptide community, there are many choices that have to be made.  Which coupling reagents to use? Heat or no heat to promote chemistry? And most importantly, which resin?  I have talked previously about resin choices, from loading levels to swelling capacity and how they affect the synthesis outcome.  But I haven't addressed yet a fundamental feature of commercially available resins, and that's the functional handle to which the peptide chain is conjugated.

In today's post, I'll describe some, and I mean only some, of the most commonly used chemical functionalities for Fmoc-based solid phase peptide synthesis and some scenarios in which you would choose one resin type over another.

The most critical question that must be asked before undertaking a peptide program is "what is the purpose of these compounds?" as this will have direct impact on the resin choice used for synthesis.  For example, are the peptides used in biological studies?  If yes, are the peptides based on a compound that exists in nature? And so on.  The answers to these questions will help to dictate whether or not the peptide requires a C-terminal amide or acid to be functional.

Resin linkers for peptide synthesis yield C-terminal functionality that generally falls into one of three different categories: acid, amide or other.

Let's first talk about the C-terminal acid linkers.  Peptide acids have the longest history in the field of solid phase peptide synthesis, but they can be challenging to work with.

The most notable acid linker is known as Wang, Figure 1.  Although this resin is commonly used, most chemists choose to buy Wang resin preloaded with the first amino acid.  Loading the first amino acid can be challenging chemically, but is also risky as the asymmetric anhydride intermediate can result in side chain racemization.  Cleaving your peptide from the resin requires concentrated TFA, liberating both the resin and the side chain protecting groups simultaneously.

Chlorotrityl resin, Figure 2, is also commonly used for peptide acids.  The increased steric bulk of the trityl groups essentially eliminates any side chain racemization that may occur during the first amino acid coupling onto Wang resin.  Importantly though, peptides can be cleaved from chlorotrityl under very mild conditions (1-3% TFA, acetic acid), leaving a fully protected peptide in solution. 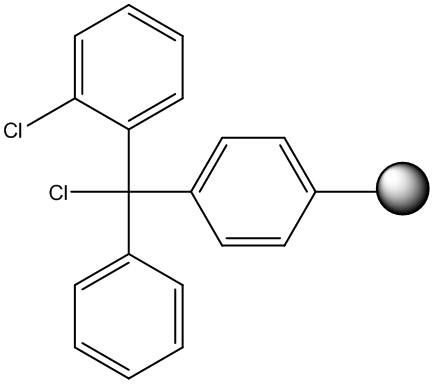 In addition to peptide acids, chemists often synthesize peptide amides.  The most common of these resins is the Rink Amide resin, Figure 3.  Amide resins are typically easier to work with as the first amino acid loading is a simple amide bond, just like every other amide formed during peptide synthesis.  Rink Amide requires concentrated TFA for complete peptide cleavage from the resin, also resulting in global deprotection of standard side chain protecting groups as well.

In addition to Rink amide (among others), there is also Sieber resin, Figure 4, for production of peptide amides.  Sieber resin is an attractive option if the peptide contains sterically bulky amino acids or alternative functionality at the C-terminus due to the limited steric bulk when compared to the Rink amide linker.  Importantly, this linker is also sensitive to mildly acidic conditions, yielding a fully-protected peptide amide in solution.

The third category is loosely defined as "other".  This is by far the most chemically diverse category, but also continues to grow with active research.  The resin linkers that fall into this category have been developed to address the ever-evolving complexity encountered during solid phase peptide synthesis.  Early examples, like safety-catch resins - discovered by Kenner and further expanded by Ellman (Figure 5) - were developed to aid in formation of a C-terminal peptide thioester, a strict requirement if one is to carry forward with native chemical ligation chemistry.  This area continues to grow and now includes hydrazides , N-acylureas, among others. 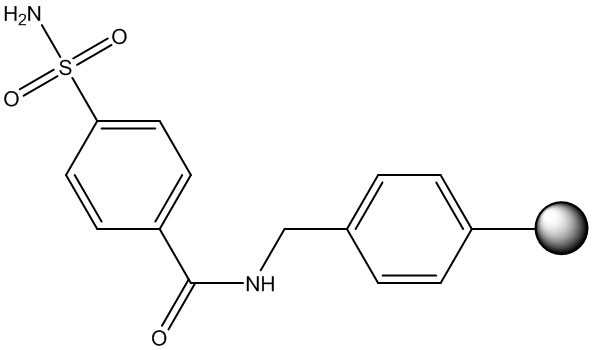 Now please keep  in mind, this is a very short list of the resins that are commercially available today.  But hopefully this gives you some insights into the decisions that must be made when embarking on a new peptide synthesis project.

Do you have a resin that has given you trouble during your peptide synthesis?

If you're interested in learning more about a holistic approach to the peptide workflow, check out my white paper below!