When purifying crude peptides, we always use a mobile phase modifier. The modifier simplifies a potentially complex purification by driving the desired peptide, and any impurities in the sample, into a single protonation state. That way, you're only trying to purify a single peptide, rather than many variants of the same peptide that only differ by the presence or absence of a couple protons - from many peaks to one!

Acids are commonly used as mobile phase modifiers. Some groups choose trifluoracetic acid (TFA), while others choose formic acid (FA). But are there others that should be considered as well? In today's post, I'll explore the use of an acidic buffer as a mobile phase modifier and compare the purification efficiency to that observed with TFA.

So I started thinking about alternative mobile phase modifiers. I consulted with my analytical chemist colleagues and discovered they often use ammonium formate, among others, to actually buffer the mobile phase in addition to altering the pH of the solution.  After some additional searching, I found a list of somewhat standard modifiers and their associated pH ranges, used in both HPLC and HPLC-MS, Table 1.  It is important to note that not all suitable modifiers are compatible with mass spectrometers as they are not sufficiently volatile.  The lack of volatility can compromise ion signal strength and general mechanical stability of the instrument over time, so double check before using new modifiers on your MS system.

Table 1. List of commonly used modifiers in reversed phase HPLC or HPLC-MS.  *Note - acetate buffers are only compatible with mass spectrometers when paired with ammonium cations.

Of all the options available, I decided to try purifying some peptides using ammonium formate.  The nice thing about this modifier is that it has buffering strength near the same pH as my standard TFA modifier but is also volatile enough for use with my Biotage® Isolera™ Dalton 2000.

It is important to note that buffer strength is directly proportional to buffer salt concentration. Given that there is a distinct potential for large sample load amounts when using high performance flash chromatography (HPFC), buffer concentration may also play a role in the clarity of the resulting chromatography.  So I decided to purify several aliquots of a BID derivative (18 amino acids in length and pI = 7.81), using 10 mM, 20 mM or 50 mM ammonium formate at pH 3.4 as the mobile phase modifier, Figure 1. 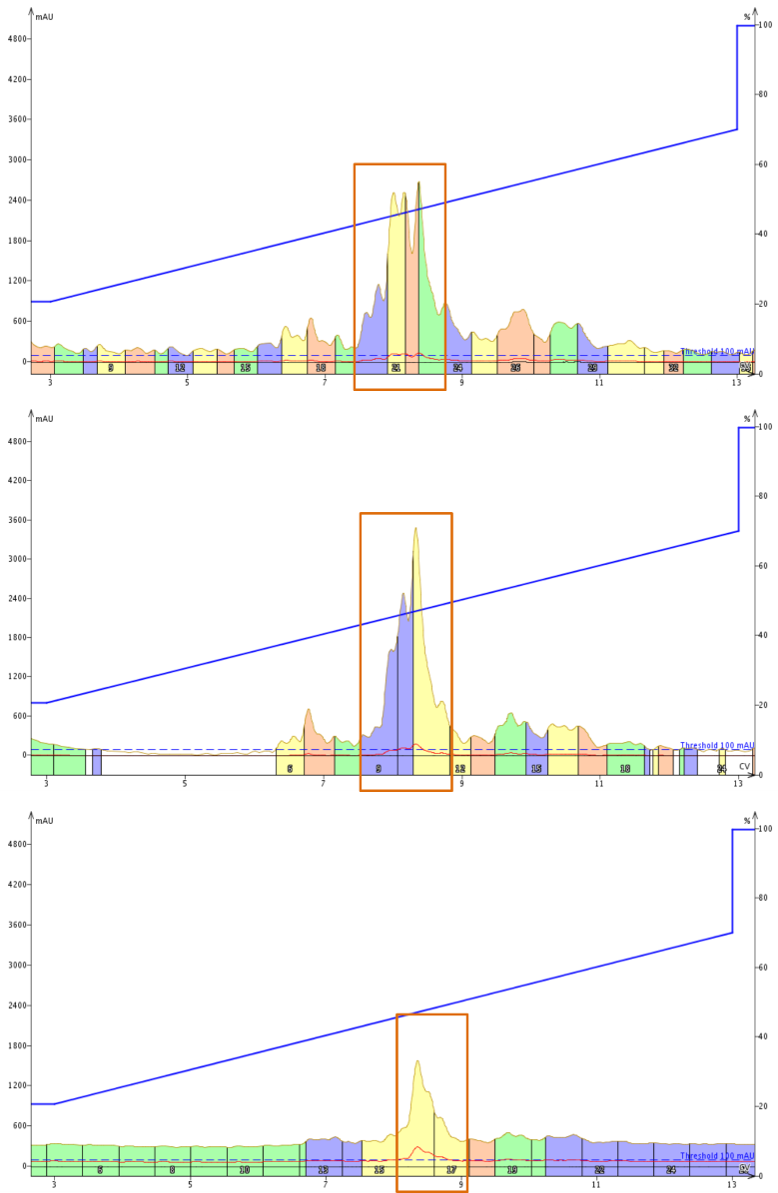 The first and most obvious observation is that the peak shape sharpens significantly, similarly to what was observed with increasing TFA concentration.  This outcome shouldn't really be a surprise.  Each purification was performed using about 40 mg of crude sample.  So not only is that a relatively large amount of desired peptides, mixed with similar impurities, we must also remember that the desired peptide contains eight, out of eighteen total, acidic or basic amino acids that have to be managed and maintained by the buffer system.

Interestingly, if we compare the sharpest peak observed by purification with ammonium formate with that observed in purification with TFA as the modifier, we'll note that this peak is actually wider than that observed with TFA as the modifier (6 mL vs 5 mL at FWHH).  This suggests that even at 50 mM, the ammonium formate is not fully driving and maintaining a single protonation state of the desired compound (or similar impurities) at pH 3.4.  Given that the pKa of Asp and Glu side chain carboxylic acids is 3.66 and 4.25 respectively, it is likely that the sample is undergoing rapid proton exchange during the purification process itself, contributing to the general peak broadness.

Secondly, with the mobile phase modified by ammonium formate there is no increase in compound retention.  This is likely due to the fact that formate is a measurably poorer ion pair than the trifluoracetate anion, limiting its ability to shield the positively charged side chains and increase apparent hydrophobicity.

When each of the fraction sets were combined (orange boxes) and analyzed by HPLC, the analytical chromatograms indicated only subtle differences in final purity, Figure 2.

While the relative purity wasn't significantly different depending on the mobile phase modifier, we did see a small decrease in the recovery of purified peptide sample.  This could be significant, depending on what will happen next with the peptide of interest.

In my opinion though, the small differences in purity and recovery for the peptide are far outweighed by the significant improvement in peak shape observed during the purification attempts with HPFC.  One of the biggest challenges that chemists encounter when using HPFC for peptide purification is identifying which fraction contains the desired compound.  I'd challenge anyone to accurately choose which single fraction reserved from the 10 mM ammonium formate purification contains the purest peptide.  Even I wouldn't take that challenge.  This lack of clarity can lead to frustration and increased time commitments that can be avoided by simply increasing the modifier concentration.

Please note: if you decide to try this type of modifier concentration screen on your flash purification system, check with the manufacturer.  High levels of buffer salts could compromise the mechanical integrity of the system (and is why I limited this screen to 50 mM buffer).

What buffer systems have you used for modifiers in your peptide purification?

Want to learn more about HPFC and how it can be used for peptide purification?  Follow the link below.