Increasing sample load for peptide purification with a step gradient

We’ve all done it. Loaded a very small amount of our peptide onto an analytical, maybe semi-prep column, to see where the desired peak elutes, then create a shortened version of that gradient for the actual purification runs. A scouting run like the above mentioned gives the chemist a lot of information about the sample – resolution from impurities, potential gradient slopes to improve the separation, even loading capacity can be calculated.

But how many times have you used a scouting run like this to figure out the purification gradient, only to have everything change when you increased your sample load? In today’s post, I highlight how easy scaling - aka increasing your sample load - can be accomplished when using reversed phase flash chromatography for peptide purification and will include some tips for success along the way.

I have been working on some projects recently that required a significant amount of purified peptide for some comparisons. Fortunately, I had quite a bit of crude peptide in the freezer that just needed purification. I had a bit of a time crunch so I decided to do some gradient optimization, looking for an optimal step gradient that could then be scaled for larger injection volumes and sample loads.

I have been putting in the effort lately to identify step gradients more routinely in my work as they are typically shorter, requiring less time and solvent, while delivering higher purity compounds, Figure 1.

For this particular peptide, I used a "template" type linear gradient, then the Optimize software feature as a starting point for building a step gradient. I ultimately identified an optimal purification step gradient (isocratic hold steps at 20% MeCN and 24% MeCN) for scaling up in about 4 total injections using a 15 mg sample load (0.1% relative to total sorbent), Figure 2.

With this optimal method in hand, it was time to increase the sample load.  This can proceed via a couple different strategies, either using the same column or increasing column size. In the data below, both strategies have been applied, Figure 3. 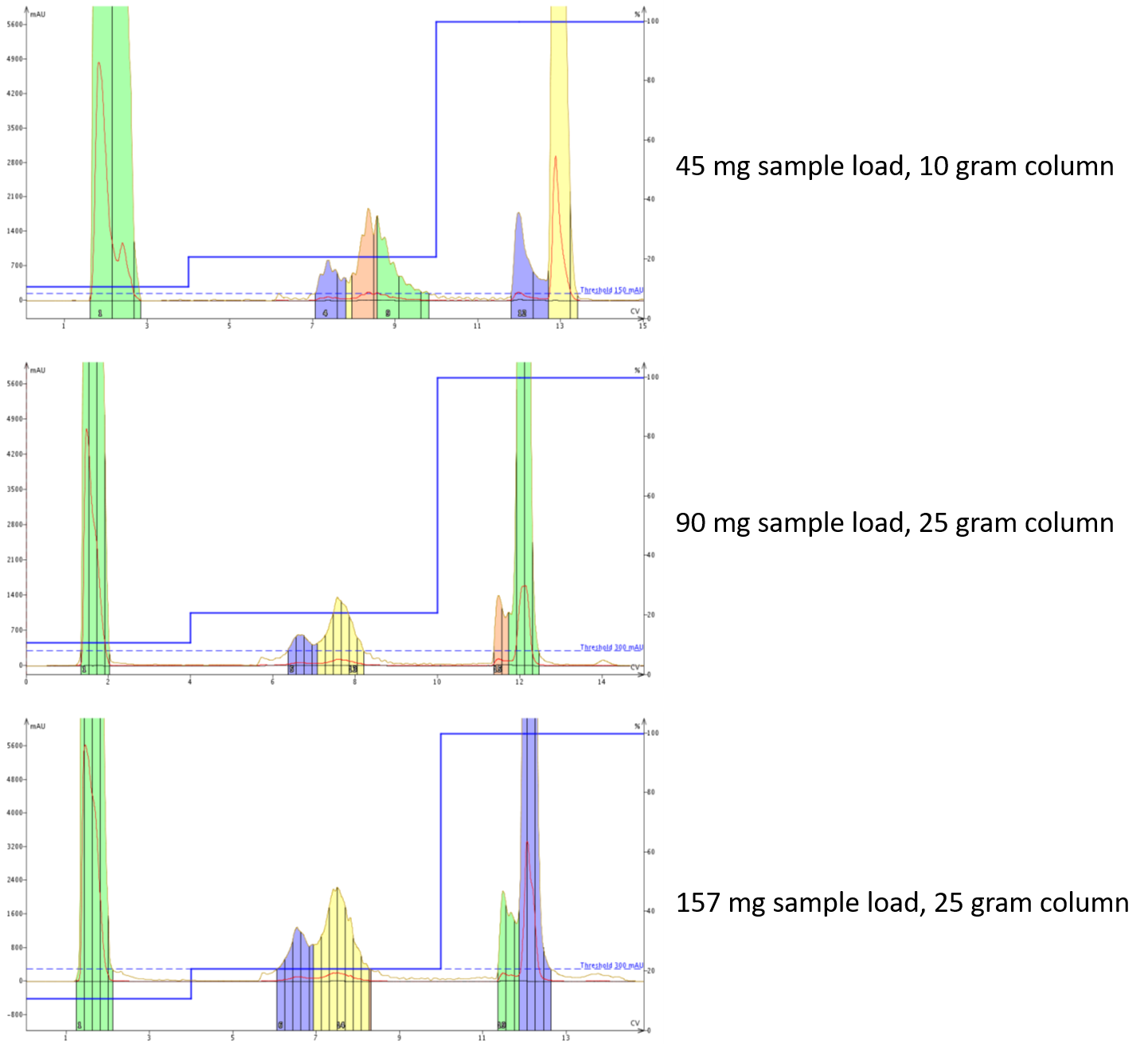 The first thing you'll notice is that these purifications were completed using a gradient slightly different than the "optimal" gradient mentioned above.  After taking a closer look a the optimized gradient, I decided that the second step was simply not necessary as the desired compound was fully eluted before the MeCN concentration change occurred.  For the larger scale purifications, I decided to increase the length of the 20% MeCN step by 1 column volume to ensure full elution from the column.

When increasing the sample load using the same column, you can see that the resolution didn't change significantly and only the minor changes to the purification gradient mentioned above.  This is good! And really a demonstration of I decided to put the work in to identify a more optimal gradient.  I have loaded >100 mg of sample on a 10 gram column historically, but in this case, I decided to move up to the larger column primarily because of the total volume remaining to purify.  Even if the sample amount is compatible with the sorbent capacity, the liquid injection volume can decrease the purification efficiency.

When moving to a different column during your scale up, you do have to be a little careful. First and foremost, if you choose to program the original scouting gradient in column volumes, no changes to the gradient itself will be required.  All Biotage® purification systems are pre-programmed with the volume of mobile phase required to complete 1 column volume during a purification with any Biotage® flash column.  Easy.

The true proof though, is in the analytical chromatography.  I combined and evaporated the fractions contained within the main peak for each of the above purifications and analyzed them by analytical HPLC, Figure 4. 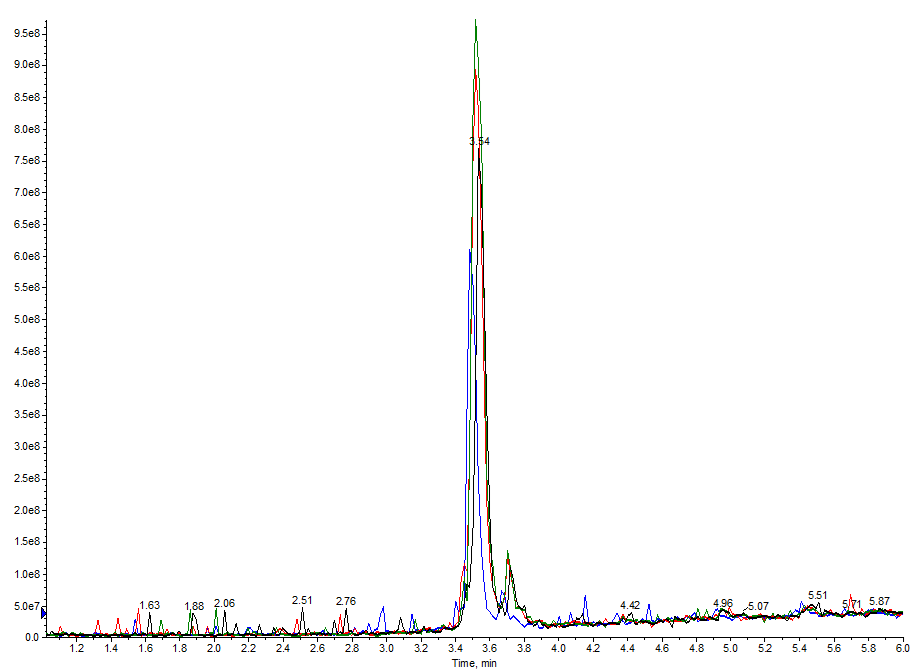 Gratifyingly, the analytical chromatograms all overlap and display identical purity profiles (adjusted for concentration differences).  These data, when taken together, highlight the importance of method development early in the purification and demonstrate how to proceed from small scale scouting runs to large scale peptide purification using reversed phase flash chromatography.

What is the most crude material you have loaded onto a reversed phase flash column for purification?

Have you ever wondered how to determine the maximal loading capacity for a reversed phase purification?  Check out the white paper below to learn more.