Room temperature allyl ester and alloc deprotections - what is the lifetime of palladium?

I have always thought of metal catalysts as difficult components of reactions to deal with.  They often require incredibly demanding conditions for successful use which seemed to translate to the protocols I was reading for room temperature alloc removals with palladium catalysts.  Argon sparging and vacuum drying glassware were just a few of the conditions that seemed "required" for successful alloc removal.

To really test the environmental sensitivity of Pd(PPh3)4, I decided to conduct some room temperature alloc removal studies under atmospheric conditions.  I first synthesized the 10-amino acid ACP fragment with a C-terminal lysine containing an alloc protecting group, Figure 1.

This synthesis was not as successful as I had anticipated.  The presence of the deletion product (eluting at 11.43 min) is likely due to fewer number of equivalents of Fmoc-Lys(Alloc)-OH used in the coupling reaction.  But that's a discussion for another time.  The deletion sequence still has a significantly different retention time than the desired deprotected peptide (expected elution of approximately 11 min), enabling me to proceed forward with my evaluation.

I first wanted to test a common set of conditions, normally conducted under argon, at atmospheric pressure.  I prepared 0.25 eq Pd(PPh3)4 (newly purchased and still bright yellow) and 24 eq phenylsilane in 1-mL DCM (total volume), transferred the solution to a reactor vial containing pre-swelled peptidyl resin, and allowed it to react for 30 minutes using my Biotage® Initiator+ Alstra™.  The process was repeated a second time with a fresh solution of Pd(PPh3)4 and phenylsilane.  The resin was washed extensively with DCM, dried, and cleaved from the resin for assessment via analytical HPLC-MS, Figure 2. 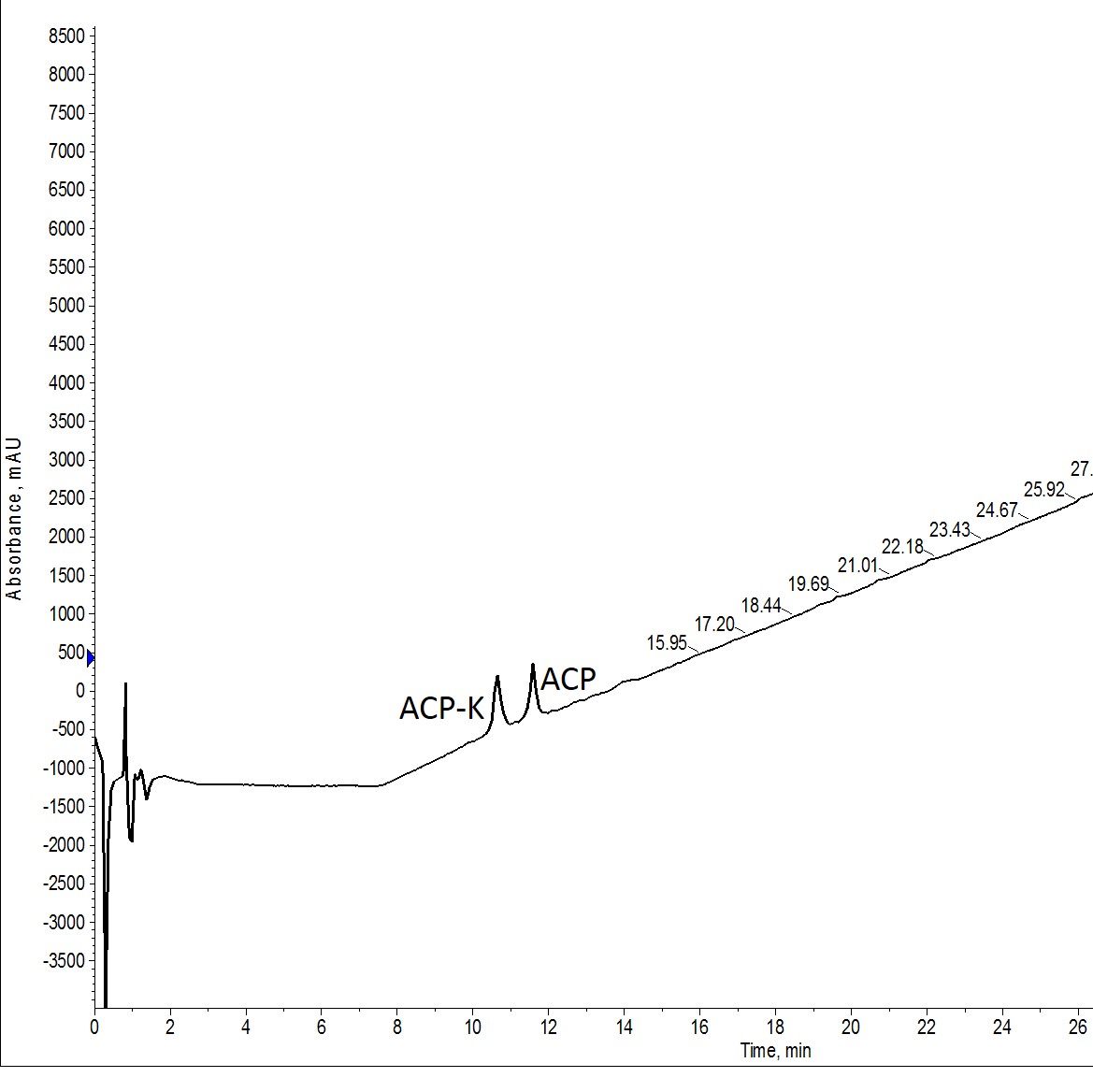 Figure 2: Crude analytical HPLC of ACP-K(alloc) treated with Pd(tetrakis) and phenylsilane twice for 30 minutes at room temperature and atmospheric conditions. The palladium solution was freshly prepared for each deprotection reaction.

This first test was a total success!  Even with mass extraction of the TIC, no protected peptide is identifiable from the cleaved peptide solution.  Based on the microwave-assisted alloc removal results this isn’t very surprising, despite the distinct lack of protective measures taken to ensure the successful alloc removal.

A more demonstrative test was next.  I used exactly the same number of equivalents, but for this experiment, I prepared a single solution of Pd(PPh3)4) with phenylsilane and allowed the Biotage® Initiator+ Alstra™ to automatically add in the solution for each deprotection step, Figure 3. 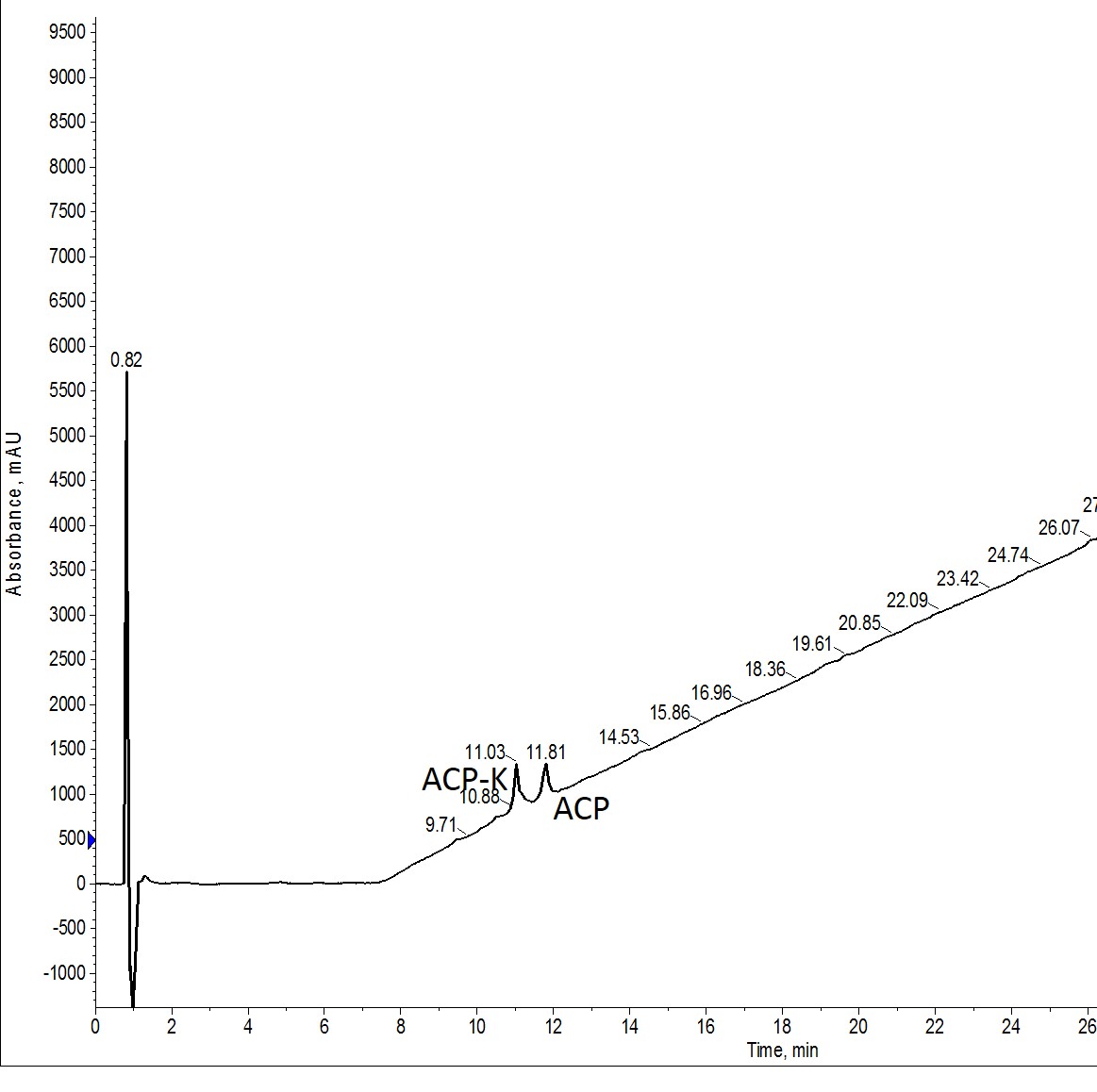 Figure 3: Crude analytical HPLC of ACP-K(alloc) treated with Pd(tetrakis) and phenylsilane twice for 30 minutes at room temperature and atmospheric conditions. The palladium solution was prepared once immediately prior to the first deprotection reaction and left at atmospheric conditions for the duration of the protocol.

If any experiments were to show detrimental effects, I hypothesized this would be the least successful.  I was wrong.  Despite the prolonged exposure to the environment, both in the reactor vial and in the amino acid tube where the Pd(PPh3)4 and phenylsilane solution was stored, no adverse effects in the alloc removal efficiency were observed.

These results suggest that the palladium catalyst, when used for a single alloc removal, is tolerant to an extended atmospheric exposure. I feel much more confident that any peptides synthesized containing amino acids with alloc or allyl ester protecting groups can not only be automatically synthesized, but orthogonally deprotected in a semi-automated manner.  For future syntheses, I'll likely synthesize the peptide, pause the instrument prior to the alloc removal and prepare the palladium-containing solution a single time without significant effort to remove oxygen from the reactor vial.  This process will significantly reduce the time and cost associated with such careful, although sometimes necessary, handling.

What are your favorite conditions for alloc removal at room temperature?  Have you considered expediting this protecting group removal with microwave heating?  Follow the link below to learn more!