Alloc, and related allyl ester protecting groups, are commonly used for peptides that will undergo lactam-mediated cyclization.  Simultaneous removal of the allyl ester and alloc groups exposes the carboxylic acid and free amine side chains necessary for the amide bond formation.  However, these protecting groups require palladium catalysts for their removal.  Historically, the sensitivity of palladium catalysts have driven chemists to perform this deprotection manually under strict oxygen free conditions.

Recently, Wilson et al. reported a series of experiments in which a palladium catalyst was used to remove alloc and allyl ester protecting groups under atmospheric conditions, with no efforts to remove atmospheric oxygen from the reactor vial but accelerated with microwave heating.  I sought to recapitulate their findings and to also explore the lifetime of the palladium catalyst in solution which I will highlight today.

I first synthesized the standard ACP peptide sequence on large scale using my Biotage Initiator+ Alstra peptide synthesizer, but this time included an alloc-protected lysine residue at the C-terminus.  As expected, this synthesis yielded a high quality crude peptide sample, Figure 1.  Once the peptide’s presence was confirmed, the remaining resin was subdivided for evaluation of various deprotection conditions. 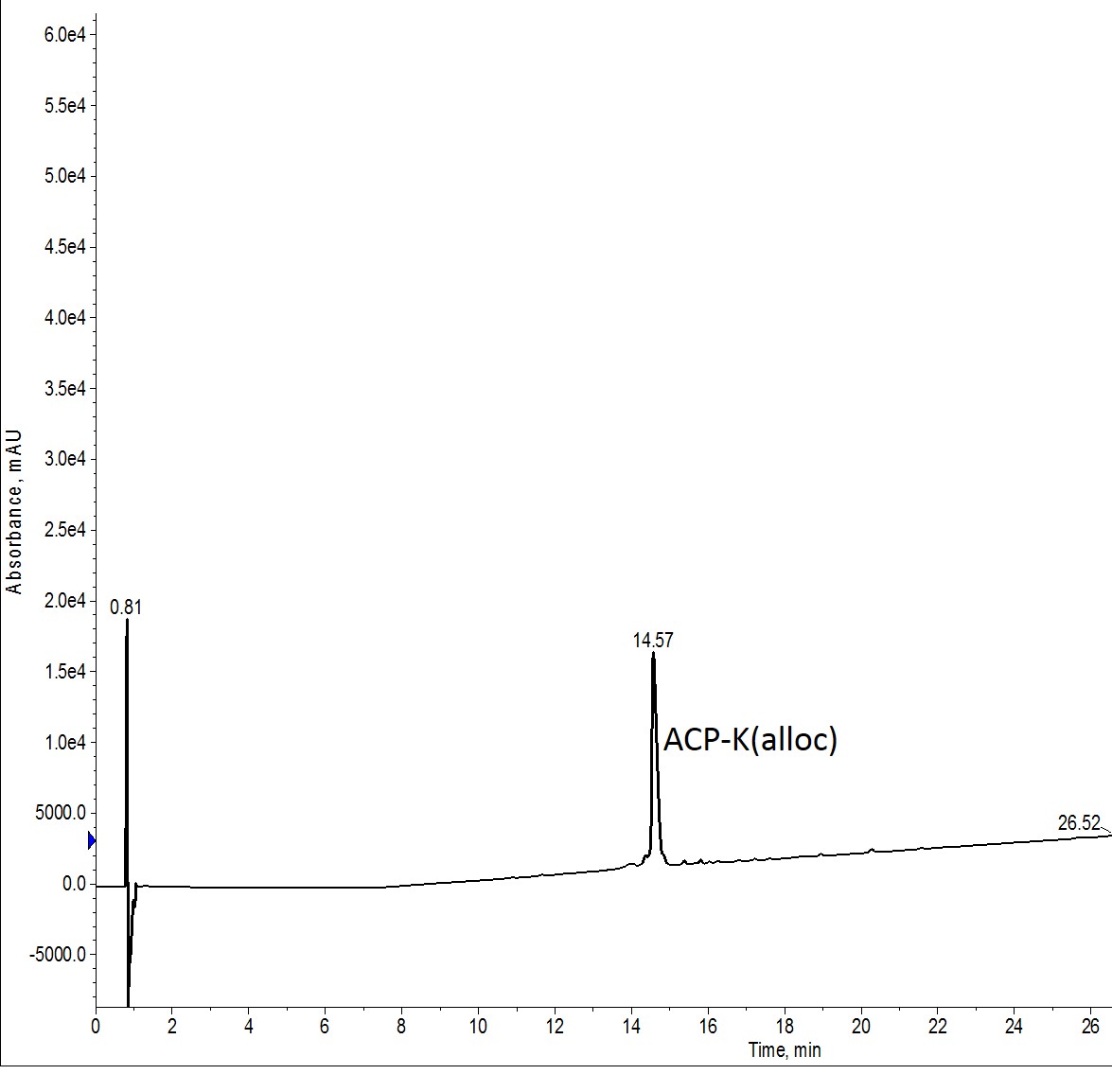 Figure 1: Crude analytical HPLC of ACP-K(alloc). A significant retention time shift is observed due to the presence of the alloc protecting group

I first tested the optimal conditions described by Wilson et. al.  I added 0.25 equivalents Pd(PPh3) along with 15 equivalents phenylsilane in 1 mL of DCM to about 30 mg of resin in a reactor vial manually.  I then allowed the reaction to proceed for 5 min with heating to 40°C.  The resin was washed and a freshly prepared solution was added and the reaction repeated a second time.  The chromatographic results of this reaction are shown in Figure 2. 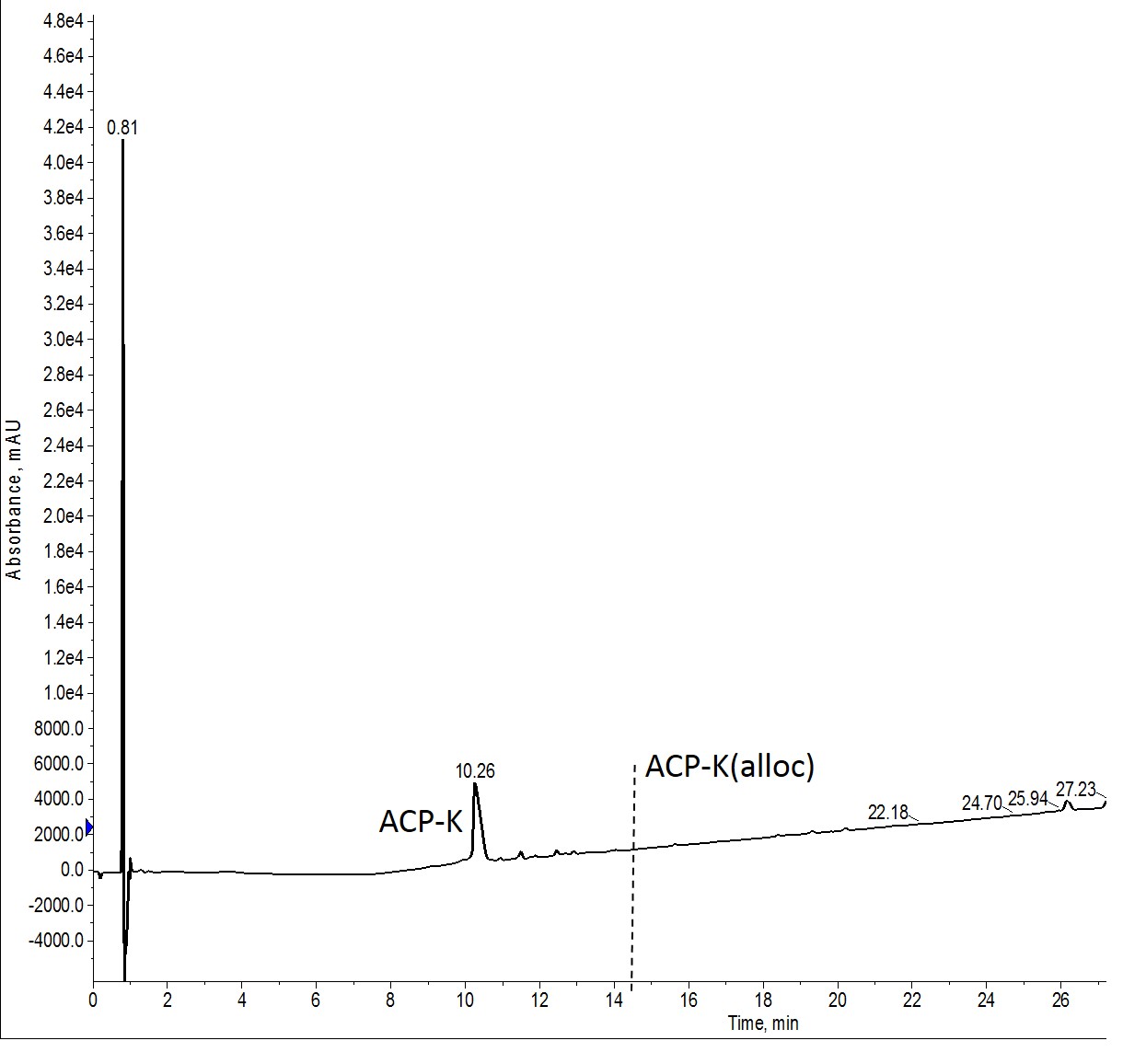 I have to admit I was a little surprised by the results.  This is honestly the first time that I have tried a set of recommended conditions in which the results turned out so well without further tweaking.  Within the limits of detection, no alloc protecting group remained.  To cover my bases though, I did deprotect some resin using the same procedure repeated three times which worked equivalently well (data not shown).  One factor not to be overlooked here is the accurate temperature control executed by the Initiator+ Alstra, Figure 3.  Heating DCM with microwave irradiation is very difficult due to the nonpolar nature of the solvent (no dipole moment means very hard to heat), compound that with the low boiling point and you have the potential to evaporate the reaction solvent prematurely.  However, real-time temperature monitoring and microwave power fluctuations enable this reaction to proceed rapidly at the desired temperature while minimizing solvent evaporation.

Once I had confirmed that the published reaction conditions would in fact yield fully deprotected peptide, I sought to explore the lifetime of the palladium catalyst.  In the first few experiments, I manually added everything to the reactor vial containing the swelled resin. But I wanted to take advantage of the robot liquid handling capability of the equipment, the Initiator+ Alstra.

First, I explored using the liquid handler to add the reagents.  For this sample, I prepared fresh a solution containing Pd(PPh3) and phenylsilane in an amino acid tube (minimizes waste) and allowed the robot to transfer the solution to the reactor vial for me.  In the first experiment, I added freshly prepared solution for each of the deprotection reactions, Figure 4.  The open environment and the small amount of time required to transfer liquid by the robot did not cause a decrease in the deprotection efficiency I had observed by added all the reagents manually. 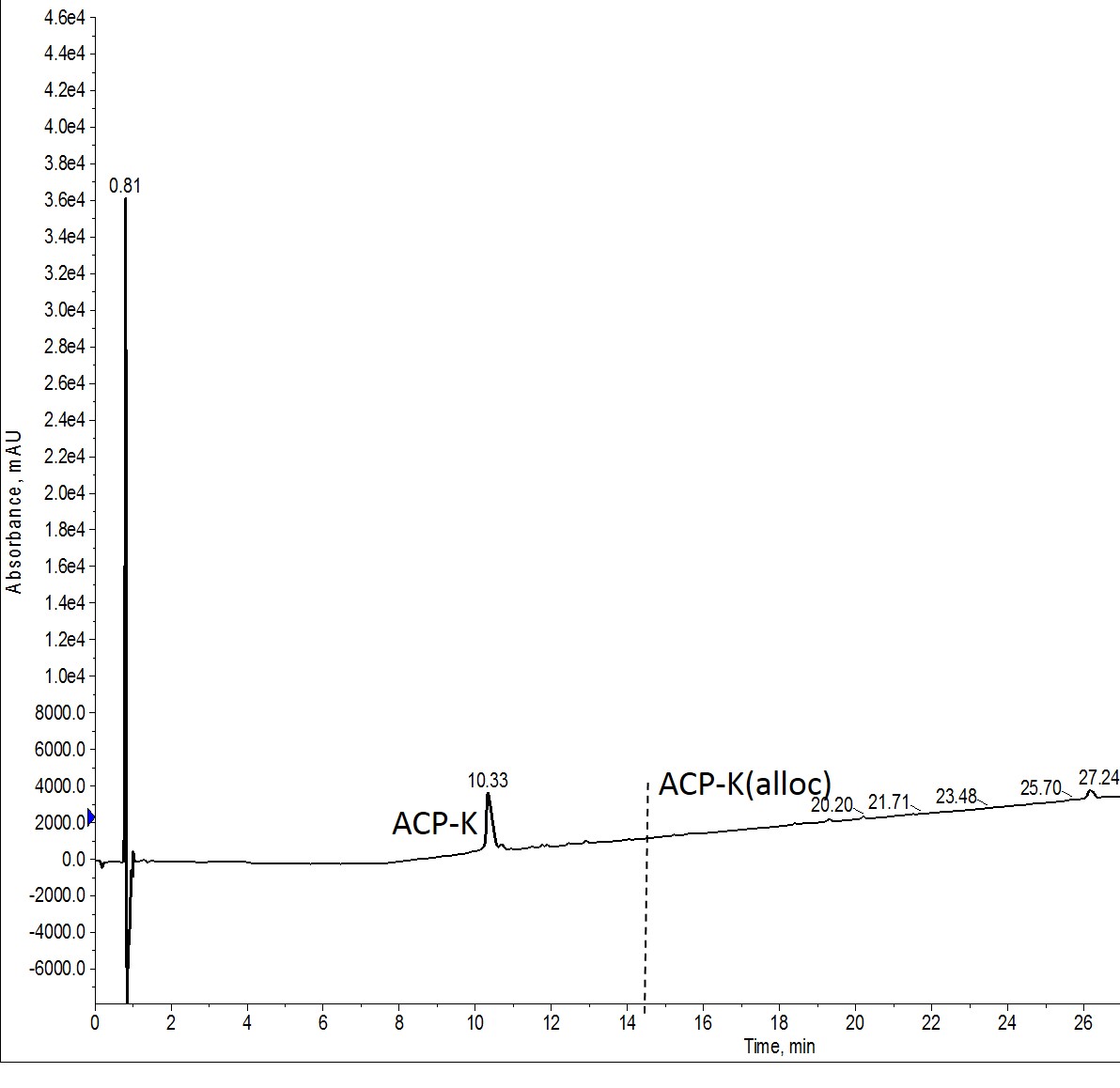 Figure 4: Analytical HPLC trace of crude ACP-K mixture after alloc removal. Alloc removal reagents were prepared freshly for each deprotection reaction, but were added to the reactor vial using the liquid handling capability of the Biotage Initiator+ Alstra.  The vertical dashed line designates where peptide with residual alloc protecting groups would elute. No peptide containing the protecting group was obvserved in the mass spectrum.

For the final experiment, I prepared a single solution of Pd(PPh3) and phenylsilane to be used for both deprotection reactions, Figure 5.  I hypothesized that this would be the least effective deprotection of the conditions evaluated due to the extended time that the catalyst solution would be exposed to the atmosphere before the second reaction.  This hypothesis proved incorrect though and the peptide was fully deprotected. 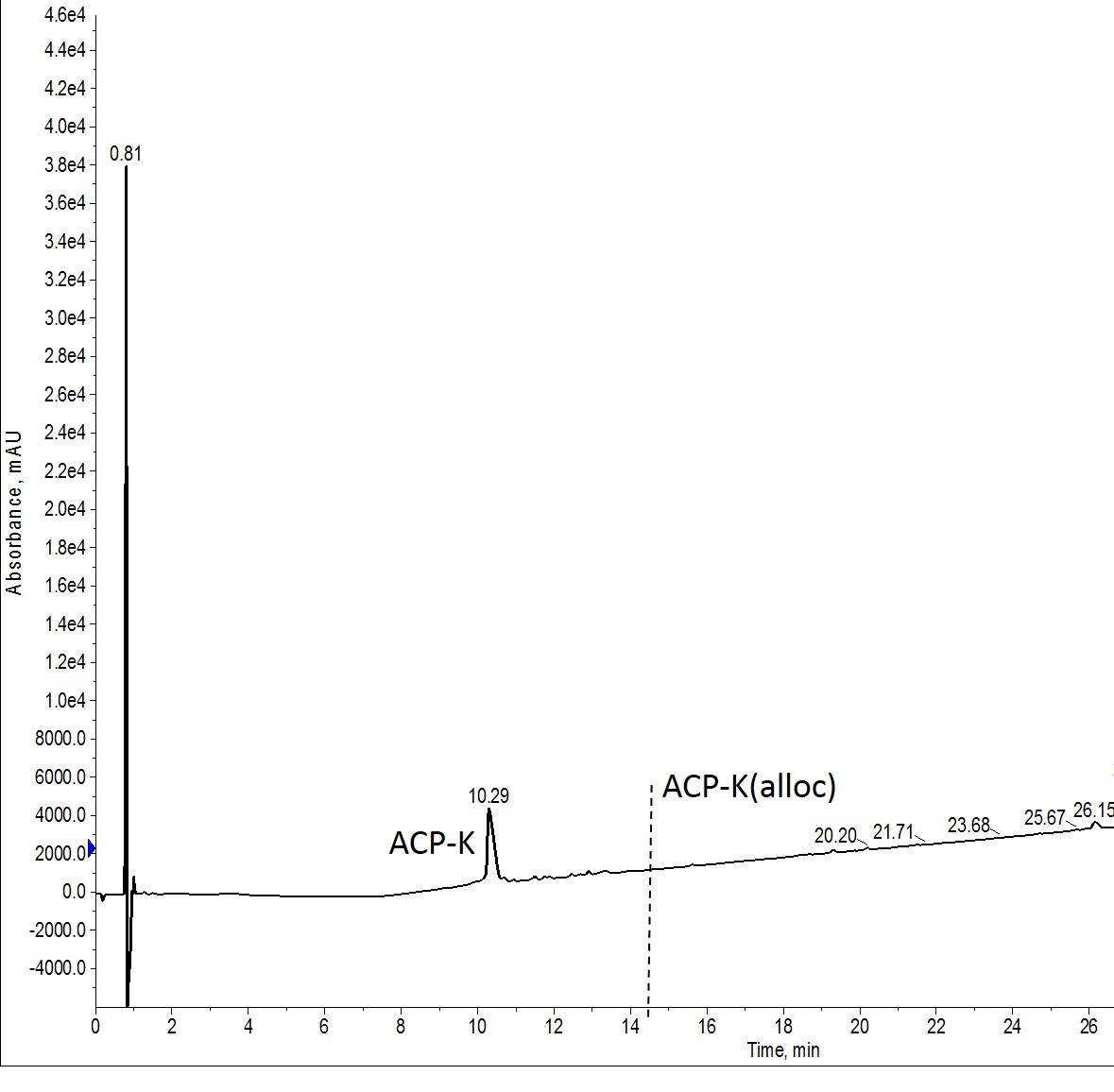 Figure 5: Crude analytical HPLC trace of ACP-K after alloc removal. Alloc protecting group was removed with reagents prepared immediately prior to the first deprotection reaction and added to the reactor vial using the robot liquid handling capability of the Biotage Initiator+ Alstra. The reagents for the second reaction were prepared at the same time as the initial reagents and stored on the instrument, open to the atmosphere until use.  The vertical dashed line designates where peptide with residual alloc protecting groups would elute. No peptide containing the protecting group was obvserved in the mass spectrum.

This finding is very exciting as it demonstrates that the reaction acceleration provided by gentle microwave heating can still yield a fully deprotected peptide while minimizing human involvement.  Hypothetically and under these conditions, a peptide could be automatically synthesized, paused for addition of the palladium catalyst solution to an amino acid tube, restarted for the automated alloc or allyl ester removal, which can then flow directly into any additional, automated on-resin chemistry.

Have you ever tried microwave assisted alloc or allyl ester removal?

To learn more about the utility of orthogonal protecting groups and how the Biotage® Initiator+ Alstra™ can simplify your complex peptide synthesis, follow the link below.