Flash chromatography is a purification technique used by chemists to isolate their targeted compound from by-products and impurities. Because the reaction mixture (or natural product extract) may have its best solubility in a solvent that is chromatographically “stronger” than the mobile phase, liquid sample loading can be problematic causing early-eluting, broad peaks which can reduce purification efficacy and product purity. In those cases, a technique called dry loading is a better alternative.

When dry loading, the extract or reaction mixture is blended with either an inert sorbent (silica, diatomaceous earth, C18, alumina), or with an functionalized media such as an ion exchanger.

I know, this is a lot of dry load media options and begs the questions - How do you know which to choose and what impact will the chosen media have on my purification results?

In this post, I report on some normal-phase chromatography research I conducted using a microwave synthesis reaction mixture (Biotage® Initiator+), Figure 1, where dry loading with five media was compared to a liquid load.

The goal of the research was to determine what influence, if any, a dry load sorbent could play in the purification of this reaction mixture. For this study, I selected the following dry load sorbents offered by Biotage which differ in functionality.

After the reaction, 0.5 mL of the reaction mixture (~77 mg) was either directly injected into a 10-gram Biotage® Sfär HC column or mixed with one of the dry load sorbents (0.5 mL RxN to 300 mg sorbent) and dried at 30 °C at 30 mbar using a Biotage® V-10 Touch evaporator. A Biotage® Isolera Dalton 2000 was used to verify the product (MW 314) was synthesized, to learn the masses of the generated by-products, and track to see if any compounds were impacted by any of the dry load media.

Liquid loading provided a baseline against which I could measure any changes in purification. The results show the reaction mixture separated into four UV- and mass-detectable compounds with the product eluting second, Figure 2. 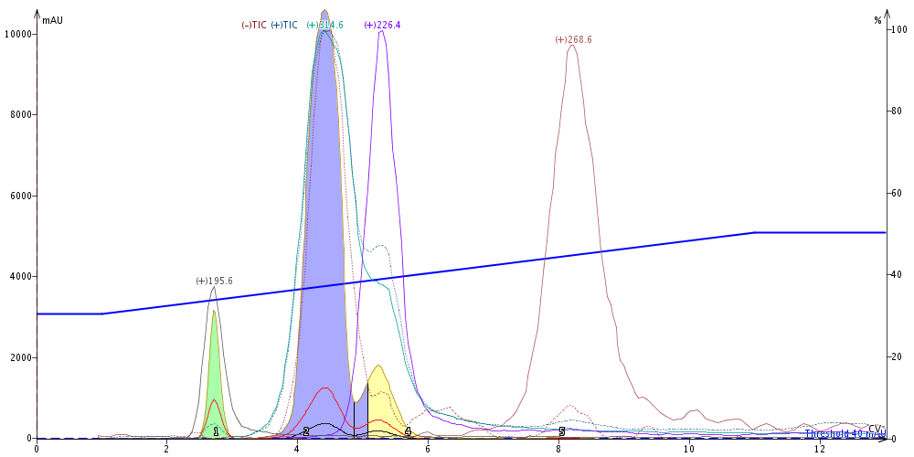 Fig. 2. Liquid load purification of the reaction mixture shows three compounds easily detected by UV  and four by mass.  The target compound is the blue peak.

Both the ISOLUTE NH2 and ISOLUTE SCX-2 media, however, showed clear signs of sample interaction. Both provided scavenging of one or more by-products from the reaction mixture, Figure 4.

The ionizable dry load media results proved to be quite interesting. The NH2 dry load media scavenged most of the first eluting compound’s UV absorbance, however, the mass was still detectable, more on that later.

The SCX-2 media scavenged the major interfering by-product from the target product. It also appeared to interact with the first peak but differently from the NH2 media. With SCX-2 we have a UV response but no mass response, the opposite of what we saw with the NH2 dry load media. To me, this says that there are two compounds eluting at the same volume, one that is UV detectable and one that is mass detectable. Intersesting, but not germane to my purification goal.

As a chemist needing to purify my synthetic target, all that is important is that my best results were achieved with the strong cation exchange dry load media (SCX) because it completely removed the most significant interfering by-product.

My advice to chemists needing to purify reaction mixtures is to use dry loading when possible to improve increase elution band concentration and potentially remove an interfering by-product or two.

More information on dry loading can be found at the button below: