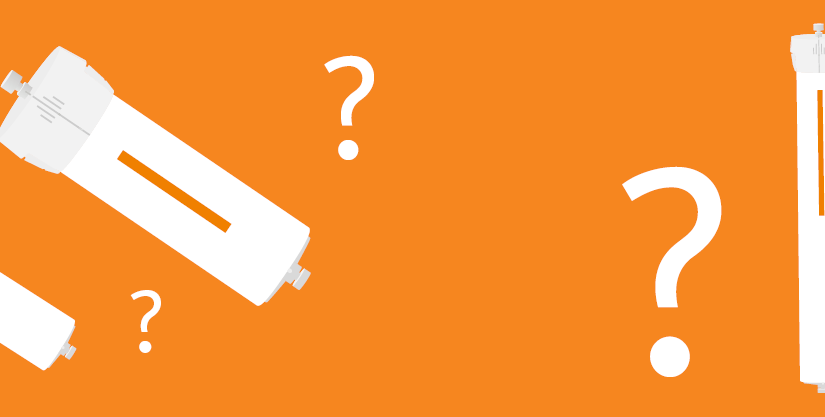 This is an interesting question that I am asked from time to time. There does seem to be two camps in which chemists reside – one believing longer and thinner columns provide better separations and the other preferring shorter and fatter columns to do the same chromatography.

Which is right? That is a question I will try to answer based on my own data.

For organic and medicinal chemists flash chromatography is an integral part of your synthesis workflow – after all, you do need to isolate your product after synthesis.

1.       Yield (need enough intermediate product for the next synthesis step)

For most of these chemists, automated flash chromatography with pre-packed columns has improved reaction mixture purification efficacy.  These flash systems usually have preset operational parameters to simplify the chromatography – select a column, solvents, elution/detection method, and press the run button.  Depending on the column size and flow rate, most runs are finished in under 20 minutes so speed is, by and large, addressed.

But, how does flash column design (e.g. column length/column diameter ratio or L/D ratio) impact these parameters? As mentioned earlier, many of the chemists I have talked to over my 40-year career believe it does with most believing a column that is longer, but thinner, is better.

Well, longer columns do provide higher plate counts (more plates per column) meaning that the elution bands are sharper (reduced fraction volume) which is what you want when performing analytical HPLC.  Wider columns, however, provide increased loading capacity and this is what preparative chromatography needs.  In fact, for every doubling of column diameter loading capacity increases 4x - an important parameter when performing preparative (flash and HPLC) chromatography.

In flash chromatography, sample loading capacity impacts both yield and purity.  There are trade-offs here – higher loads improve yield but can diminish purity while lower loads improve purity but reduce yield.  That relationship is straightforward and something I previously discussed.

In my experience, it usually does not really matter whether a flash column is long and thin or short and fat if they contain the same amount of the same media.  In reality, upon sample loading, whether liquid or dry, the sample will spread to the column walls and elute in a band.  With long/thin columns, the band is thicker and, depending on load amount, can degrade the column's plate count. With a wide/short column, there are fewer plates per column but the sample is spread over a much larger surface area so the elution bands are thinner they migrate down the column. Unless there are some serious column/media differences, the results usually are similar.

To determine if L/D ratio has an impact on flash purification, I compared a 25 gram Biotage® SNAP Ultra column (~25 µm) with a L/D ratio of ~2.40 (short/fat) to an Isco Redisep® Gold 24 gram cartridge (~30 µm) with a L/D ratio of ~ 4.74 (long/thin). Three runs were performed with the first using a flow rate of 75 mL/min with the SNAP Ultra 25 gram column (this is its default flow rate). The second run used an Isco RediSep® Gold 24 gram column also at 75 mL/min to match flow rates. The third run also used an Isco RediSep® Gold 24 gram column but was operated using the Isco recommended flow rate of 35 mL/min.  The reason I chose to use two different flow rates with the Isco cartridges is that linear velocity has a large impact on separation performance as well. At the lower Isco column flow rate the solvent linear velocity for the Biotage and Isco cartridges are similar and provide optimal results, Table 1.

Figure 1 shows a 3-component separation performed on a Biotage® SNAP Ultra 25 gram column and an Isco RediSep® Gold 24 gram column at equivalent load and flow rate (75 mL/min). This run shows that both columns perform the separation but the Isco column elutes non-symmetrical (fronting) compound peaks with less retention and what appears to be increased fraction volume compared to the Biotage column. The splitting of the last peak is due to the polar injection solvent (IPA).  Part of the retention difference is the fact that Isco and Biotage use different silica though both are ~25-30 µm in particle diameter. 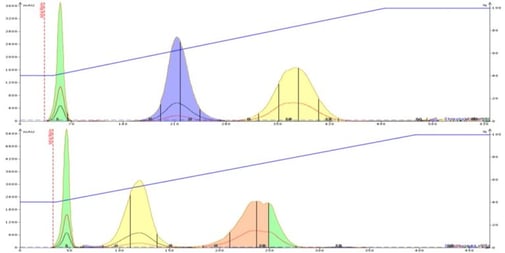 Figure 1. SNAP Ultra 25 gram (top) and Isco RediSep® Gold 24 gram columns run at 75 mL/min show faster elution with the Isco cartridge but with broader, misshaped peaks. The SNAP Ultra cartridge has an L/D ration of ~2.40 whereas the Isco Gold has an L/D almost 2x larger at ~4.74.  The faster solvent linear velocity through the Isco column increases the fraction volume and partially causes fronting.

When operated at the slower flow rate (35 mL/min), the Isco RediSep® Gold column elutes peaks that are slightly sharper but still front; fraction volumes are reduced slightly as well, Figure 2.  However, the overall separation performance did not change. 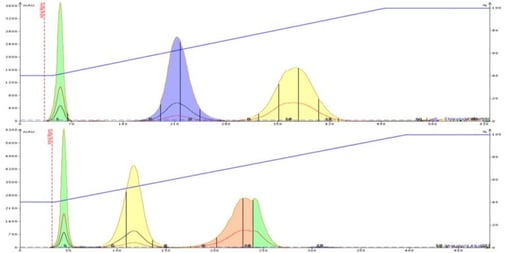 Looking at the chromatograms does not tell the entire story, however.  In order to see if any differences other than the obvious exist I decided to analyze the data by...

From this data we see a shorter/fatter column (Biotage® SNAP Ultra) provides more resolution (especially peaks 1 and 2) and elutes the compounds in smaller volumes compared to the longer/thinner Isco RediSep® Gold.

The resolution and retention differences are caused by the silica used by Isco and Biotage. Isco silica and Biotage silica do not have the same surface chemistry or surface area though they do share a similar particle size (~ 25-30 µm). The difference in L/D ratio, however, does impact the amount of bandspreading which is seen with the fraction volume/retention volume ratio. For this sample, a shorter/fatter column does appear to provide better purification results.

What has your experience been with long/thin vs. short/fat flash columns?