An interesting question, at least to me. Depending on the detector brand, some mass spectrometer manufacturers recommend acetonitrile while others recommend methanol. Is there a real difference between these solvents?

In this post I look at how acetonitrile and methanol compare when used with an APCI source.

How do you decide on mass detector make-up solvent choice? In a previous post I showed the impact using buffered and acidified acetonitrile has on APCI detection (it is not good). But this work generated the question - is acetonitrile the only useful APCI make-up solvent?

Well, the answer is no, but with a couple caveats.  One caveat centers around the fact that not all compounds ionize in the same way in the same solvents.  This we learned from the previous post.  That is also true even with different neat solvents such as acetonitrile and methanol.

To show some of the differences, I performed some tests using a sample containing three compounds - butyl paraben (MW 194), quinoxaline (MW 130), and 4’-methoxyacetanilide (MW 165), made to a concentration of 1 gram each in 20-mL isopropanol, Table 1.

Table 1. Probes used in this study.

From this stock solution, I made a 1 to 200 dilution in methanol for mass analysis via direct injection/infusion; final concentration 0.00075 g/mL.  For my research, I used a Biotage Isolera™ Dalton 2000 system with an APCI source.

Figure 1 shows the detected ions using acetonitrile as the make-up solvent. Responses are strong (109, 108) in both positive and negative ionization. For reference, neat solvent ionization as Total Ion Count (TIC) is typically measured at 106 in positive mode and 105 in negative mode.

Figure 1. Direct injection of a mixture of butyl paraben, quinoxaline, and 4'-methoxyacetanilide with acetonitrile as the make-up solvent reveals four masses for the three compounds. Butyl paraben ionizes best in negative ionization mode and is detected at -m/z 193 ion. In positive ionization mode quinoxaline is detected as both the M+1 (166) ion and M+ACN+1 (207) adduct while 4'-methoxyacetanilide is seen as the adduct M+ACN+1 (172).

Figure 2 shows similar data when using methanol as the make-up solvent.  Responses here are also strong (108) in both positive and negative ionization modes but the detected masses are a bit different. In methanol, quinoxaline is detected as its M+1 (131) ion, while 4’-methoxyacetanilide is detected as both the M+1 (166) ion and the M+MeOH+1 (198) adduct.  Butyl paraben is again detected only as the M-1 ion. 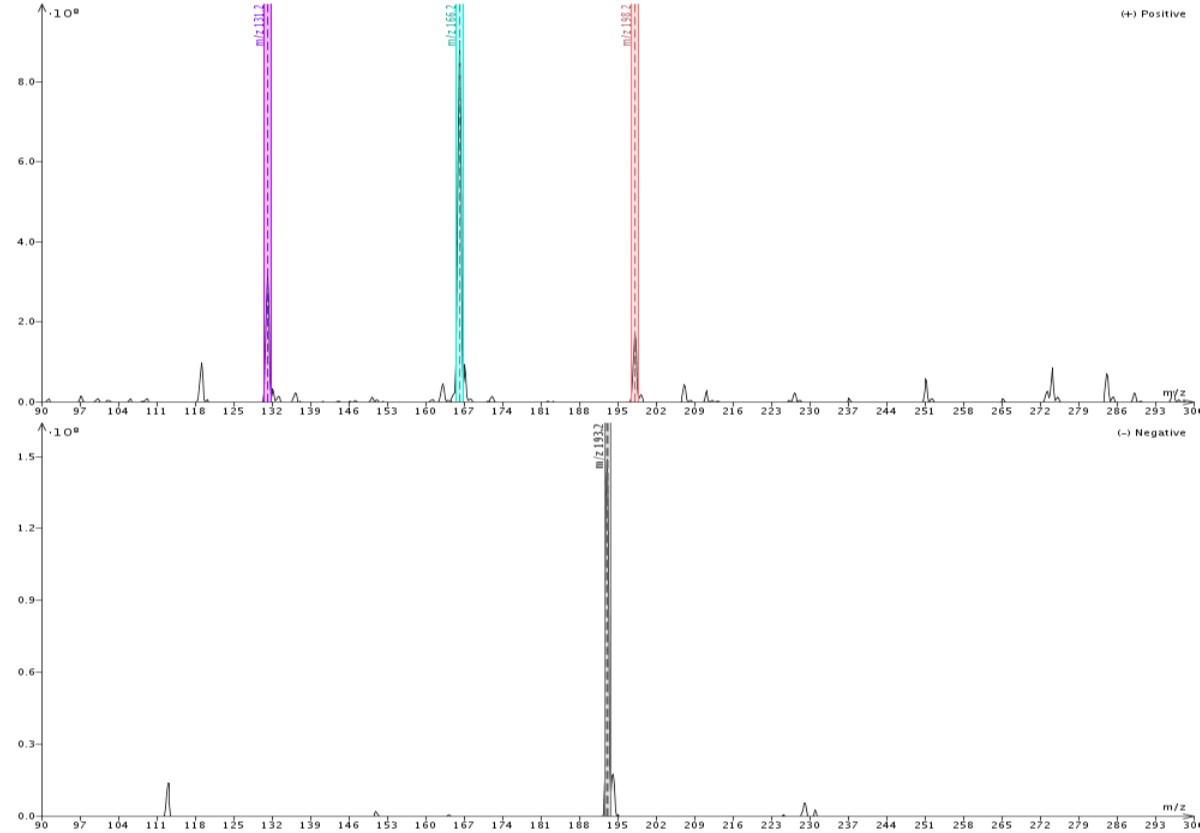 Figure 2. Direct injection of the same  sample but with methanol as the make-up solvent shows butyl paraben as the M-1 (193) in negative ionization mode. In positive ionization mode quinoxaline is detected as the M+1 (131) ion, and 4'methoxyacetanilide as both M+1 ion and M+MeOH+1 (198) adduct.

So, based on this data either solvent should work as a make-up solvent.  The other caveat is the backpressure generated while using methanol as the make-up solvent.  With acetonitrile the pressure is 65 psi or so but with methanol it is 98 to 100 psi, still in an acceptable range but higher.

More information on using in-line mass detection with flash chromatography is available below: