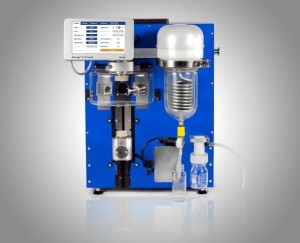 This is an age-old question that has been around a long time, perhaps as long as me (and I have been around a while) –  “Does silica dissolve in methanol?”

For many years I have heard from organic and medicinal chemists as well as students of organic chemistry that silica is dissolved by methanol when running a DCM/MeOH gradient.

In this post, I share the results of some tests I performed that hopefully will help clarify what is happening to the silica when in contact with methanol.

For as long as I have been involved in the field of flash column chromatography I have heard stories about chemists finding white powder in their purified product which has been verified to be silica.  The only time this is seen, that I know of, is with gradients of DCM and methanol.  The conclusion that is drawn is that silica is dissolving in the methanol.

Until now I never tested this theory.  When I have asked those who are more knowledgeable in silica chemistry than me, the answer is always, “no,  silica cannot be dissolved by methanol.”  However, being the inquisitive scientist that I am I wanted to determine this on my own.  So, I finally was able to set aside some time in the lab to perform my own experiments to hopefully shed some light on this topic.  After all, you know the old saying which says “where there is smoke there is fire” meaning that there may be some truth to what these medicinal chemists have been telling me all of these years.

I decided to test for dissolution of standard, granular, flash-grade silica (your typical 40-63 µm, 60Å, 500 m2/g silica) and spherical silica of similar particle size and porosity (Figures 1 and 2).  For the former I used a 5 gram cartridge packed with granular silica.  For the latter I used a 5 gram Biotage® ZIP-Sphere cartridge packed with spherical silica (60 um, 50Å, 750 m2/g).  The reason I chose two types of silica is that granular and spherical silica are both frequently used in flash chromatography and it would be unfare to test only one silica type and draw a scientifically valid conclusion. My logic being that if methanol dissolves silica then its physical shape and other characteristics should not matter.

The collected effluent was then transferred from 120 mL bottles (collection vessels used with the Isolera) into pre-tared scintillation vials and evaporated.  As controls, the same volume (80 mL) of neat DCM and neat MeOH were also evaporated.

The results were quite interesting as the MeOH control sample left a cloudy residue weighing 2 mg.  The DCM also left some residue (1 mg) indicating neither solvent is as pure as desired or the scintillation vials contained residue; likely a little of both.  The fraction collected from the 100% methanol cartridge wash generated the same residue mass as the methanol control indicating that pure methanol does not dissolve silica.

Results changed, though, when I evaporated the DCM/MeOH gradient fractions.  The granular silica cartridge generated 3 mg of “solids” which appeared to be more of a wax with some opaque white areas.  The results from the spherical silica cartridge also subjected to the same 0-100% MeOH gradient generated only 1 mg of a cloudy residue, half as much as the 100% methanol control provided.  This makes sense as the solvent evaporated from the cartridge was 50% methanol and 50% DCM and the recovered “solids” are in line with ½ of the methanol control. For a results summary, please see Table 2.

From the results of this experiment I can postulate that silica does not dissolve in methanol or during a DCM/MeOH gradient but that granular silica, because of its irregular shape, sheds fines (very small or sub-micron silica particles).  I believe the fines are liberated due to the flow of the mixture of a highly dense solvent (DCM) and a very polar and protic solvent (MeOH).  My thinking is that DCM with its high density exerts stronger forces than other solvents on the silica potentially weakening the granular silica’s irregular, jagged “points” and that MeOH helps to displace the DCM-generated silica fines through hydrogen bonding with silica’s silanols; it is a theory.  Spherical silica does not have these jagged points and thus is more stable in a high density/high polarity solvent environment and therefore does not shed fines.

To help verify this theory, a cartridge packed with the granular silica was subjected to an isocratic flush with 80 mL of 100% DCM at 18 mL/min.  The collected fraction was evaporated and the residue only weighed 1 mg, the same as the DCM control.  This result helps support the theory that neither MeOH nor DCM alone degrade or dissolve silica but the combination does liberate ultra-fine particles capable of passing through the flash cartridge frits and into collected fractions.

So, if you need to use a DCM/MeOH gradient to purify your samples you should consider using a spherical silica cartridge to eliminate any silica liberation concerns.

What have you experienced when using DCM and MeOH mobile phases?

Interested in learning more about flash chromatography? Read my white paper on Inspiring Productivity with Modern Flash Chromatography at the link below