How to maximize UV detection sensitivity in flash chromatography

Automated flash chromatography has become an integral component of the workflows of both synthetic organic chemistry and natural product research. The most utilized chromatographic technique is normal-phase, which uses a polar stationary phase filled column (i.e. silica) and a mix of non-polar and moderately polar solvents, i.e. hexane or heptane and ethyl acetate (EtOAc), resp.

These automated flash chromatography systems are equipped with pumps, solvent mixing capability to create elution gradients, a variable wavelength UV detector to “see” the compounds as they elute from the column, and a fraction collector to capture the detected compounds.

For many compounds, especially those with aromaticity, this scenario is great. Hexane/heptane and EtOAc are easily obtained and provide suitable separations on silica for most of these compounds. Aromatic compounds can usually be detected using a UV wavelength of 254 nm, a wavelength where most chromatographic solvents, including those mentioned above, are UV transparent (i.e. do not absorb UV light). Being transparent at 254 nm increases the detected compound’s sensitivity and increases its purification yield.

But this isn’t reality for a lot of compounds either being synthesized or isolated from a natural product. These compounds may only absorb UV at lower wavelengths which decreases their detectability by UV even when the detection wavelength settings on the flash system are lowered to maximize sensitivity. Why? Because EtOAc absorbs UV light from <200 nm to ~ 260 nm and its absorbance can mask that of the compounds in the material being purified. EtOAc’s UV absorbance at low wavelengths also causes the baseline to rise with its increasing content in the elution gradient.

There are a few ways to fix this problem…

I will focus on option 2 here. Acetone is a very common solvent and really good as an alternative to ethyl acetate. It does, however, absorb UV at wavelengths >230 nm so can be problematic it you need to purify and isolate a variety of compounds with different chemistries, such as in a natural product extract.

MTBE, on the other hand, has high UV transparency across all wavelengths and falls in a different selectivity group (I). So, before you use it for compound purification, ensure you achieve a suitable separation of your target compound or compounds from any unwanted material. For comparison, both acetone and EtOAc are in selectivity group VI.

I mention this because in some recent research I was having trouble detecting all of the UV absorbing compounds in a botanical extract, Ylang Ylang III, using a standard hexane/EtOAc gradient. So, I followed the above advice and looked at hexane with acetone and hexane with MTBE, achieving very different chromatographic results.

Ylang Ylang III botanical extract contains many terpenes and terpenoids including mono and sequiterpenes, among others. UV absorption of these compounds extends from just low wavelengths to having several UV maxima.

For flash chromatography I used a 5-gram Biotage® Sfär HC column and a 0-50% B gradient where B was either EtOAc, acetone, or MTBE. Detection was UV 200-350 nm. The results show very different detection responses, Figure 1. 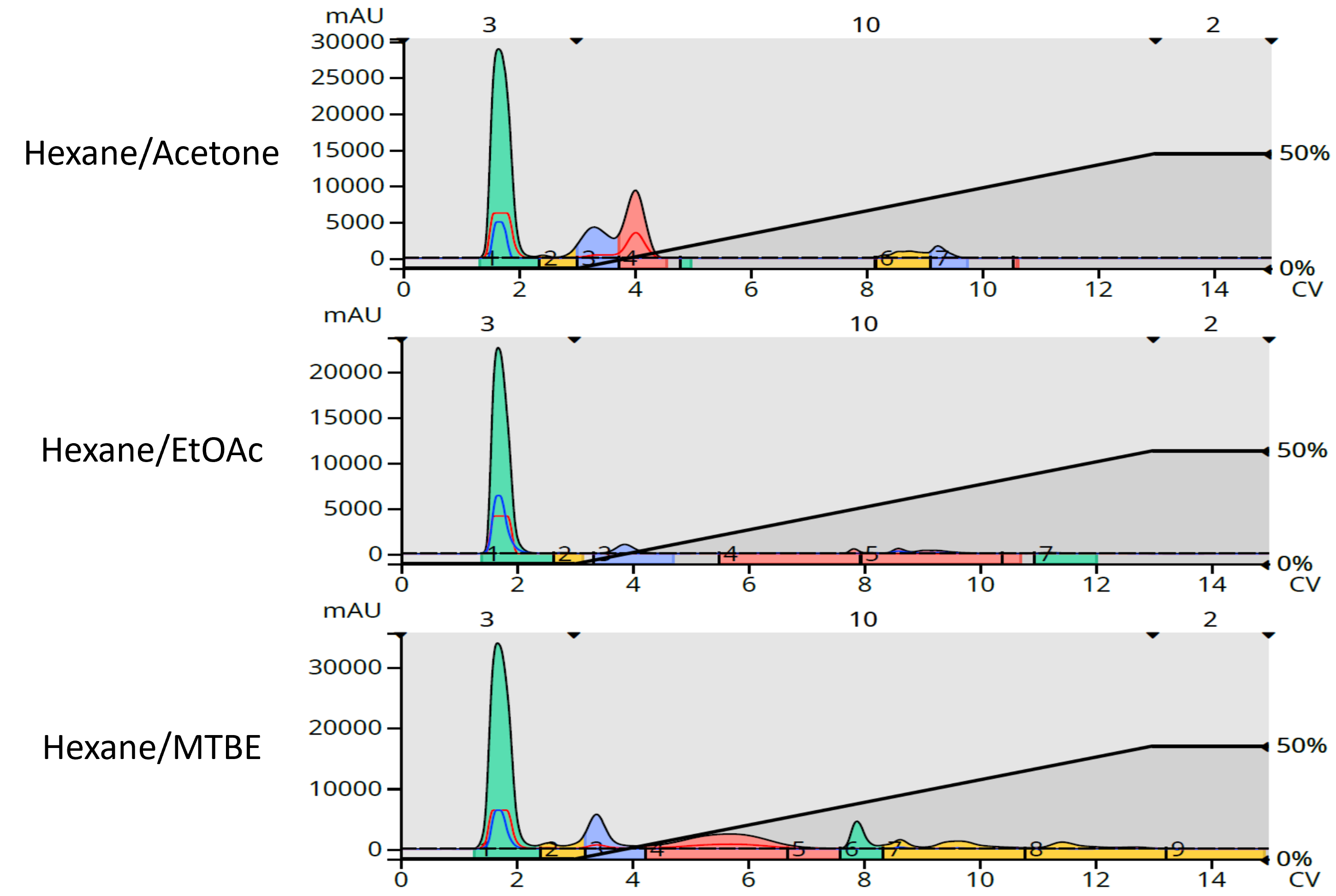 The data show that EtOAc masks much of the eluting compounds’ UV absorption compared to acetone and MTBE because it absorbs UV at the same wavelengths as the terpene compounds. The data also seem to show that acetone provides the best sensitivity for the less polar, early eluting compounds. However, acetone’s higher eluting strength relative to MTBE and EtOAc causes the extract compounds to elute earlier, increasing their concentration and ease of detection. Acetone did, however, mask the detection of several later eluting compounds which have UV absorption in the 250 nm range.

This data also shows that only MTBE was able to separate and provide detectability for all of the Ylang Ylang III terpenoids making it the best “B solvent” choice for normal-phase purification of terpenes and other compounds with UV maxima less than 254 nm.

For more information on flash chromatography techniques and issues, visit our blog site at Biotage.com