What is a Chromatography Gradient?

Weaker elution conditions provide adequate compound retention so that all compounds will not immediately elute from a chromatography column. Stronger conditions elute compounds retained better on the column. A properly designed gradient will separate the target molecule from its impurities.

There are several popular and useful gradient designs (Figure 1)… 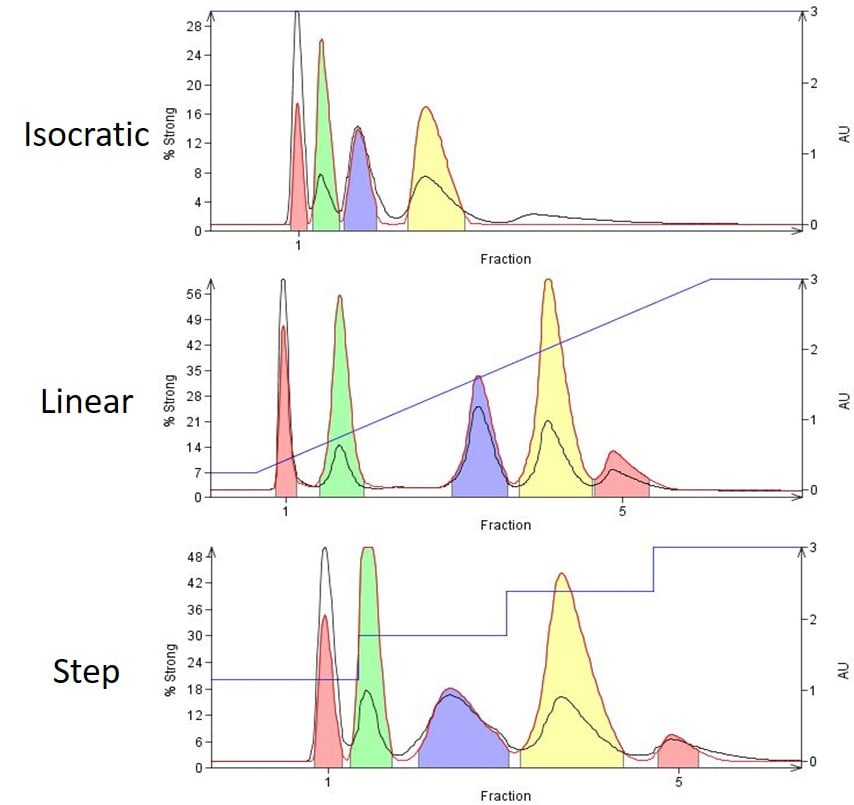 Which gradient type should you use? That decision is yours to make but here is some guidance.

Isocratic elution is best if your target compound is easily resolved from its impurities. The benefit of isocratic elution is simplicity – no instrumentation required, just acceptable thin-layer chromatography (TLC Rf) data, Figure 2.

Figure 2. Thin-layer chromatography (TLC) of a crude mix using a 50:50 mixture of hexane and ethyl acetate as the solvent mix.

The solvent mixture used with TLC is directly transferrable to flash chromatography. In the example here, the crude mixture TLC shows four separated spots (compounds) using a 50:50 hexane/ethyl acetate solvent blend. Compound elution order follows that of the TLC plate with the compound with the highest Rf value (0.85) eluting first and the lowest (Rf 0.2) eluting last.

However, in this case flash chromatography using the same solvent blend shows only three of the four compounds are visible, Figure 3. This may be due to one of the downsides of isocratic elution – compound band broadening which makes detection challenging. This same phenomenon can also cause one higher concentration compound to “overrun” another, smaller compound.

Figure 3. Isocratic separation of the 4-component crude mixture provides a separation of three major components. Although the compounds elute in the same order as the TLC plate, the third component (Rf 0.34) is not visible.

Most chemists use linear gradients to separate and elute their targeted compounds. Why? Because of the issue seen in the above example.

A linear gradient helps to keep each compound’s band broadening to a minimum. Compounds will stick to the column media until the solvent polarity is strong enough to dissolve the compound and elute it from the column. And, like the isocratic method, linear gradients are developed from TLC data.

Figure 4 shows the benefits gained using a linear gradient using the same sample. Because the gradient for this crude mixture purification begins with a weaker solvent mix (12% ethyl acetate) and ends with 100% ethyl acetate, the sample’s components are better retained on the column and only elute when the appropriate solvent blend is generated by the gradient. Though linear gradients may use more solvent than isocratic methods, the compounds separate better and are collected in less volume. In this example, the linear gradient resolved, detected, and collected the missing compound with Rf 0.34. 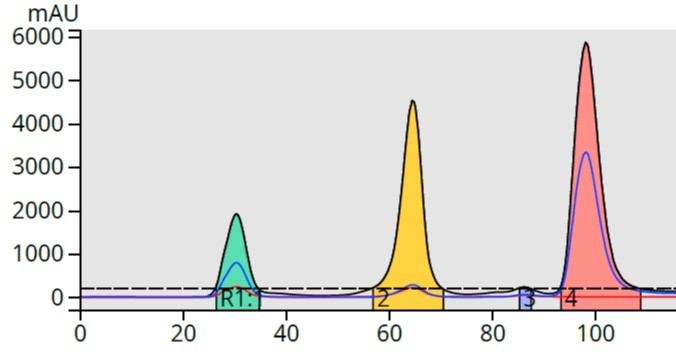 Figure 4. Using a linear gradient (12%-100% ethyl acetate) dramatically improved the separation/purification of the mixture's four compounds including the small compound with Rf 0.34.

Step gradients can be the most useful but also the most challenging to use. This gradient style uses a series of linked isocratic steps (like stairs) to separate and elute various sample components. When properly designed, step gradients can provide a complete separation of the targeted compound or multiple compounds in narrow bands while using less solvent than a linear gradient or isocratic elution, Figure 5.

Figure 5. Step gradient purification of the 4-component mixture fully resolved the four compounds found using TLC and possibly another impurity in the front of the yellow peak. The step gradient used less than 60 mL compared to 100+ mL with both the isocratic and linear gradient methods.

Here, the step gradient not only separated the four compounds found using TLC but is possibly removing another impurity in the leading edge of the second eluting compound. Also, please note that the step gradient consumed less than 60 mL of solvent whereas the linear and isocratic methods both consumed over 100 mL - a 40% solvent savings.

So, that concludes the overview of gradient elution. Each has its merits and issues but understanding their theory and application will provide with the best results.