One of the more challenging purifications is that of water-soluble, ionizable compounds. Typically, normal-phase with silica is not used because of the probable non-reversible interactions, especially between the ionized amines interacting and the ionizable silanols.  With normal-phase out of the purification solution that leaves ion exchange and reversed-phase as chromatographic options.

In this post I will discuss the use of reversed-phase and the influence pH and buffers have on the chromatography of some ionic, water soluble compounds.

Reversed-phase chromatography is the most common technique used for analysis in analytical labs. In synthesis labs it is normal-phase (silica) that is dominant. However, reversed-phase is becoming used more often now as many the small molecules being synthesized today are increasingly more polar and often ionizable.

Anions and cations and zwitterions, oh my! (with apologies to the Wizard of Oz) are not to be feared as simple solvent system ionic strength and pH adjustments usually alleviate the problems. How can you tell if you are experiencing a problem related compound ionization?  The symptoms are usually found with compounds that elute earlier than expected, are retained but exhibit a broader peak profile than expected, have extreme fronting or tailing, or show up as a split peak when all other peaks are symmetric or uniform.

To illustrate the issues and solutions I decided to try and purify some very common household chemicals - food colors. These dyes are highly aromatic in structure and contain either sulfonic acids, with or without carboxylic acid groups, or a mix of sulfonic acid and quaternary amine groups (zwitterionic) which make them extremely polar and fully water soluble.

The food colors used in the study are listed below; see Figure 1 for chemical structures. 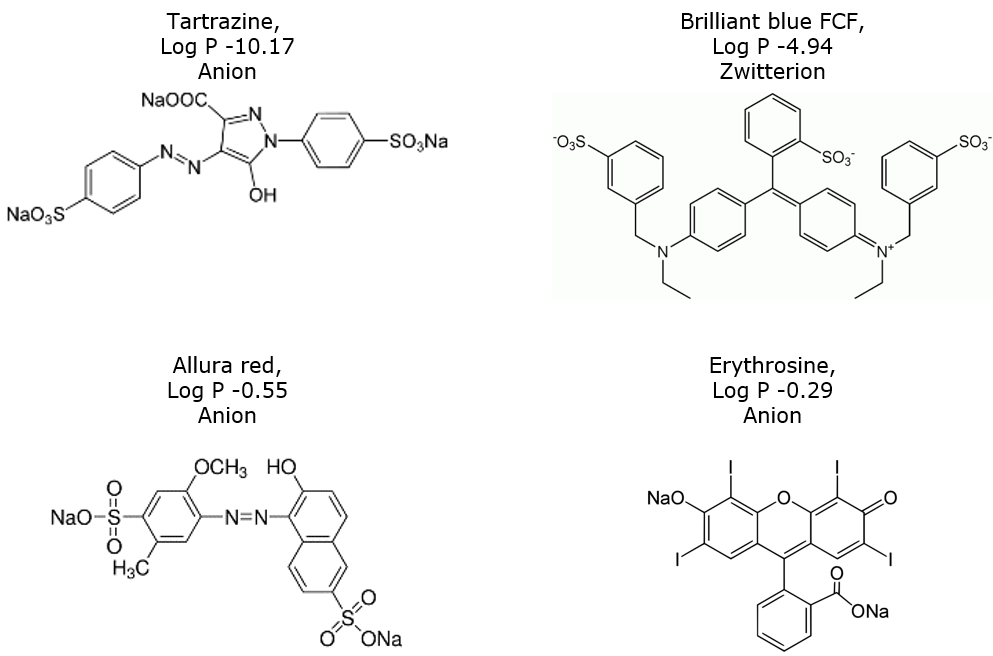 The major challenge with chromatographic purification of these compound types is how to deal with the always ionized sulfonic acid and quaternary amine groups as they can, and will, change the chromatographic partitioning kinetics unfavorably. So, to improve the partitioning equilibrium the best approach is to evaluate both buffering and pH adjustment.

Since the goal of flash chromatography is purified product recovery we should limit the buffers and pH modifiers to those that are volatile – TFA, formic acid, and acetic acid; ammonium hydroxide, MEA, DEA, TEA as bases; ammonium formate, ammonium acetate, and ammonium carbonate buffers.

To show how these compounds’ chromatography is impacted by buffering, and lack thereof, I ran four purifications, three using methanol and aqueous 0.1M ammonium acetate at three different pH levels (3, 7, 10) as the elution solvents and one without any buffer or pH adjustment - a simple water to methanol gradient all using the same high-performance C18 cartridge (Biotage® SNAP Ultra C18).

The result of the unbuffered mobile phase is shown in Figure 2. It is very clear from this chromatogram that one compound (tartrazine) has no retention and elutes at the solvent front and the other eluting dyes (allura red, brilliant blue and erythrosine) are quite broad with some tailing.

Figure 2. Chromatogram of four food colors - tartrazine, allura red, brilliant blue FCF, and erythrosine - using a water/methanol gradient. The highly ionic nature of the compounds minimizes their ability to partition with the C18. The last eluting peak is propyl paraben which is used as a preservative.

Since ammonium acetate is volatile and pH neutral, I started my buffering experiments there by replacing water with a bottle of aqueous 0.1M NH4OAc and running the same gradient profile.  The peaks, in order of elution are - tartrazine, allura red, brilliant blue, and erythosine, Figure 3.

The result of buffering, even at neutral pH, is increased compound retention and sharpened the peaks.  The buffer induces a phenomena known as ion pairing.  In ion pairing the added buffer's ions are typically more lipophilic than the compound's "native" counter ions and the buffer's high concentration drives the ionization equilibrium to one where the native counter ions are completely displaced by the buffer's ions making the compounds more retentive.

Using the pH 7 model as a standard I also looked at the impact of pH.  At pH 3.5 we see tartrazine's retention decline by over a column volume while the other dye's retention remain constant, Figure 4. This I found as odd since tartrazine contains both sulfonic acid and carboxylic acid functionality so I thought at least the carboxylic acid groups would protonate.  However, what has happened is the pyrazole functionality has ionized which has changed the equilibrium dynamics and made the compound more hydrophilic.

Figure 4. Food color separation at pH 3.5. The retention of tartrazine (yellow peak) has decreased to 2 CV compared to its retention at pH 7 (3.5 CV). All other dyes maintain their retention.

Interestingly, though, at pH 10 the retention for tartrazine remained essentially the same as pH 7, not something I expected to see, Figure 5. The other compounds’ retentions are also maintained.

Figure 5. At pH 10 the retention for tartrazine (blue peak) essentially maintained its retention compared to pH 7.

So, if you know you have compounds that contain either strong or weak ions be sure that you add a volatile buffer to increase compound retention and improve peak shape.

Have you needed to purify highly ionized compounds? Why not share your experiences with us?

If you wish to learn more about flash chromatography, please download our whitepaper - Successful Flash Chromatography