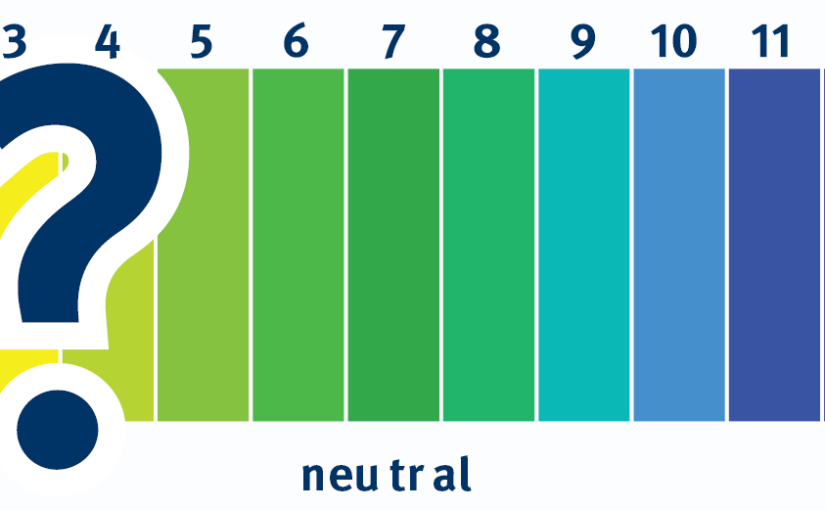 I have previously posted on the topic of normal-phase optimization by evaluating different solvent blends or mixtures. I have also touched on reversed-phase method development as well suggesting chemists use HPLC to optimize their purification.

In this post, I will look at the impact modifying mobile phase pH can have on reversed-phase separations.

One of the benefits normal-phase chromatography offers is the ability to rapidly evaluate various solvent blends by TLC to optimize flash purification methods.  For normal-phase, virtually any organic solvent is a candidate to be part of the mobile phase.  However, reversed-phase has some real constraints when it comes to solvent selection.

Since water is usually the weak solvent with reversed-phase, all strong solvent choices need to be fully water-miscible.  Though there are many water-miscible organic solvents (alcohols, acetonitrile, acetone, tetrahydrofuran (THF)), viscosity concerns with higher alcohols limit their use. THF is an ether and its long-term storage due to peroxide formation is problematic (stabilized THF can be used but introduces potential stabilizer impurities). Acetone is a great solvent but strongly absorbs UV so can be challenging to use unless your flash system has baseline correction capability.

So, that leaves us with methanol and acetonitrile for most applications.  These two solvents have different solvent strengths and selectivity. Therefore, it is a good idea to look at both of these solvents when developing a reversed-phase method.

Another optimization criteria is mobile phase pH.  Since reversed-phase methods are often used to purify polar and/or ionizable compounds, ensuring compounds are either fully ionized or fully un-ionized is important to chromatographic integrity.

Previously, I have discussed the impact of pH on normal-phase purifications. To illustrate the influence pH can have on reversed-phase flash chromatography I spent time in my lab looking at how best to purify caffeine-spiked Equal®.

Equal contains three major compounds – dextrose, aspartame, and acesulfame-K. Dextrose, being a very polar sugar, will not retain on reversed-phase, even in 100% water. Aspartame is relatively hydrophobic (contains a benzene ring) and retains well. Acesulfame-K is a fully ionizable potassium salt (hence the “K”) and may be a challenge to separate from dextrose.  Caffeine is moderately hydrophobic (it has solubility in dichloromethane) and so it too should be retained.

I first started with a gradient of water and methanol (10% to 40% over 10 column volumes (CV)).  My sample consisted of 1 packet of Equal (~1 gram) dissolved in 10 mL of water and some caffeine crystals.  To 160 mg of caffeine crystals I added 8 mL of Equal solution mixing well to ensuring complete dissolution.

To ensure all compounds were detected I used an Isolera Dalton 2000 system (flash purification system with in-line mass detection) with the electrospray ionization (ESI) source.  My make-up solvent (dilutes and ionizes the column effluent prior to entering the mass detector) was 95:5:0.1 acetonitrile/water/formic acid. I used the mass detector to target and fractionate the four compounds based on their detectable mass to charge (m/z) values, Table 1.

What I found using the water/methanol gradient was that a separation of dextrose and acesulfame is possible but not ideal.  Likewise, I found caffeine and aspartame to be only partially separable, Figure 1.

Looking at each compound’s structure, it is easy to see that both acesulfame-K and aspartame are ionizable which may be working against an optimal separation, Figure 2.

Figure 2. The compounds used in this post's work¹.

To eliminate acesulfame’s ionization, I added formic acid (1%) to the gradient as an additive realizing it may also impact aspartame’s retention. The result of adding acid was increased acesulfame retention and a change in the caffeine/aspartame retention order – aspartame decreased retention while caffeine retention remained essentially the same, Figure 3. 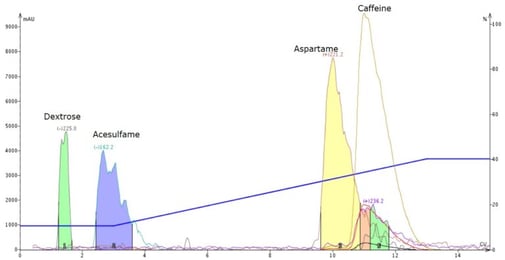 Adjusting pH through the addition of an acid or base can really influence chromatographic separations.

More reversed-phase tips and tricks are available below:

Structures from NIH National Library of Medicine website
Equal® is a registered trademark of Merisant Corp.