What is the Chemistry Behind Reversed-Phase Flash Chromatography?

In my previous post, I talked about the "Chemistry Behind Normal-phase Flash Chromatography", the most common form of liquid-solid chromatography. In this post, I focus on reversed-phase flash chromatography and how it differs from normal-phase.

As a recap, normal-phase chromatography uses a polar stationary phase and a non-polar/moderately polar solvent mobile phase. The separation mechanism is adsorption/desorption with the most polar compounds adsorbing better (and eluting later) than less polar compounds.

Reversed-phase chromatography is different from normal-phase in three ways...

What Happens Inside the Column

With reversed-phase chromatography, the chemical mixture (e.g. reaction mix, natural product, extract, etc.) is dissolved in a suitable solvent and injected into the column. When the mixture contacts the non-polar media, let’s say octadecylsilane bonded silica (aka C18 or ODS), the mixture’s compounds will stick to the hydrophobic surface but at differing rates. The more hydrophobic the chemical the more strongly attracted to the reversed-phase media. 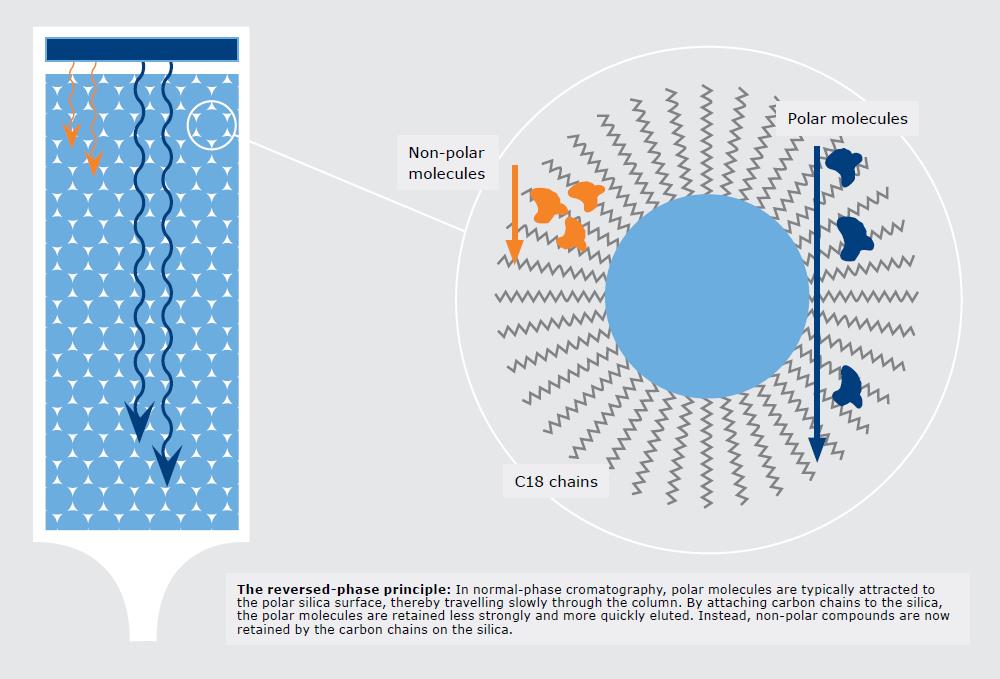 With the partitioning mechanism, those molecules with greater hydrophobicity (not necessarily polarity) will adhere to the lipophilic media most strongly which can even separate a double bond from a triple bond, Figure 2. 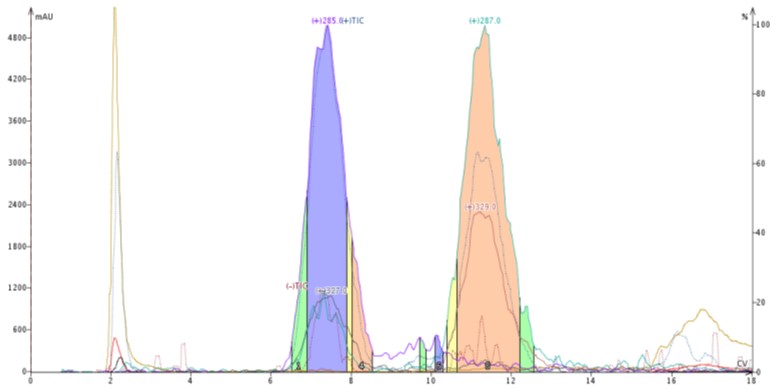 Figure 2. Reversed-phase purification of a natural product extract. The leading compound has a triple bond and the trailing compound has a double bond with all other structural components identical. These compounds are not easily separable by normal-phase chromatography.

To ensure good sample component binding, the sample to be purified needs to either be dissolved and loaded into the column in a chromatographically weak solvent (water, DMSO, DMF) or, if not well solubilized, dissolved with a stronger (non-polar) solvent, then mixed with an inert media (e.g. silica, C18-bonded silica, diatomaceous earth), dried, and packed into a different column placed in-line with the purification column. This sample introduction technique is called dry loading and eliminates many issues encountered when using a liquid load, especially with a sample dissolved in a strong (non-polar) solvent.

After sample load, the mobile phase solvents are introduced. To achieve a separation the sample components need to partition between the stationary phase and mobile phase at different rates. This is achieved using a mobile phase that starts with high polarity and decreases its polarity over time by introducing a solvent that is more organic but water soluble (e.g. methanol, acetonitrile). This changing polarity separation method is known as a gradient.

So, to summarize reversed-phase chromatography uses differences in compound hydrophobicity, rather than polarity differences, to separate compounds.