Which injection solvents should I use for reversed-phase flash purification?

In previous posts I have touched upon various sample loading options and how they impact flash chromatographic performance, primarily in normal-phase flash purification. As the use of reversed-phase flash chromatography has steadily increased over the past few years I thought it would be a good idea to discuss one of the most important factors impacting its success.

In this post I discuss the results of some of my original research studying the impact of injection solvent choice on reversed-phase flash separations. Reversed-phase chromatography is typically used when you need to separate several milligrams of relatively polar compounds that either are not soluble in normal-phase solvents or are not compatible with bare silica because they react, stick, or both.  If you are currently using reversed-phase at preparative scale, such as flash chromatography, you know the mobile phase limitations – water with either methanol, acetonitrile, or THF – that’s just about it for mobile phase choices.  And, like with normal-phase, when it comes time to purify you want your crude sample fully solubilized in the weakest possible solvent at the highest possible concentration.  This can be a challenge since with a limited mobile phase selection that includes water, a lot of "strong" solvents are off the table, so to speak, because of miscibility issues or chromatography degradation (as discussed in my normal-phase sample load option post).

Choices then? Water comes to mind but most organic compounds are not soluble in it.

However, if too large of a volume of these reversed-phase dissolution/injection solvents are loaded onto the column, they can disrupt the chromatographic partitioning kinetics, degrade the separation, and reduce sample load and resulting fraction purity - not one of our purification goals.Using the mobile phase to dissolve your sample can work but at what concentration and solvent/water ratio (you are likely going to use a gradient, right)?  Too weak and dissolution is likely poor, too strong and you will likely degrade the separation. So, does that rule out straight methanol, straight acetonitrile, or how about acetone? Well, I have found that at high sample concentrations (~1 g /mL) and with small injection volumes (~0.5% of a column volume), you can get good results.

To highlight the importance of choosing the correct dissolution solvent, I developed a reversed-phase method to separate five organic-soluble compounds of various polarities (methyl paraben, butyl paraben, naphthalene, 1-nitronaphthalene, 3,5-dibenzyloxyacetophenone). Five stock samples were prepared at 1 gram of each compound in 5-mL of each of the solvents (~20% solution).  The solvents that were chosen included methanol, acetonitrile, acetone, DMF, and DMSO.  Each stock solution was diluted 1:1 with the same solvent and the injection size was 0.1 mL; a 12 g Biotage® Ultra C18 cartridge was used for the purification with a gradient starting at 55% methanol and increasing to 100%.

For my first run, I injected the methanol-dissolved mixture.  The results even surprised me. You would think that a small 0.1 mL injection of a methanol-dissolved sample into a 55% methanol solvent system would work well; it is only 0.6% of a column volume! I certainly did but as can be seen below the chromatography is actually quite poor with substantial peak tailing and low resolution of peaks 3 and 4 (yellow and pink), Figure 1.

Figure 1. Reversed-phase separation of 50 mg of a 5-component mix using a water-methanol gradient. The dissolution solvent was methanol and the injection volume was 0.1 mL. The resulting chromatography is less than ideal with substantial peak tailing and poor resolution.

Next, I injected the acetonitrile-dissolved sample.  It actually produced better results than the methanol sample even though it is a "stronger" solvent. The peaks were noticeably sharper indicating improved mass-transfer kinetics of the solutes during the separation even though the mobile phase is water-methanol.  Unfortunately, the improved peak shape did not improve the resolution between any of the peaks, Figure 2. 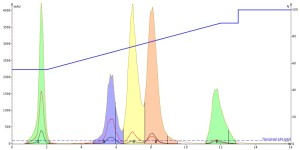 Figure 2. Acetonitrile injection, 0.1 mL, of the 5-component mix shows much improved peak shape with similar resolution between peaks 3 and 4 as with the methanol injection.

As mentioned above, I have used acetone in much of my work as it dissolves many compounds at high concentration and is both organic and water soluble so potentially suitable for both normal- and reversed-phase applications.  It is, however, quite a bit more non-polar (stronger) than both methanol and acetonitrile which can lead to chromatographic issues in reversed-phase.  But because the gradient started in 55% methanol, I decided to include it as well figuring acetone's increased hydrophobicity would have minimal impact on the separation, especially with the low 0.1 mL injection volume.

Well, the acetone injection results were actually better than the methanol injection but not quite as good as acetonitrile as a bit more tailing is evident, Figure 3. Intriguing! 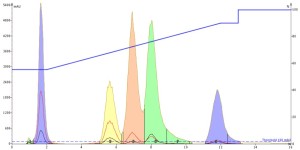 Figure 3. Acetone injection of the 5-component mix provided improved peak shape vs. methanol but not as good as acetonitrile.

I also evaluated both DMF and DMSO as dissolution solvents.  These very polar solvents have the ability to dissolve a broad polarity spectrum of compounds.  That capability, along with having high boiling points, have propelled their use in peptide and organic synthesis.  However, many chemists believe direct injection of these solvents will be problematic for chromatography, which is why I added them to this experiment - to see if there are any issues with them as dissolution solvents.

Interestingly, both the DMF and DMSO injections show that they improve the mass-transfer kinetics so much that peak tailing is greatly reduced AND the separation is improved as well, Figures 4 and 5. And remember, this is just the injection solvent effect at a volume of only 0.1 mL! Also, both solvents elute at the void volume and are clear of any of the other solutes. 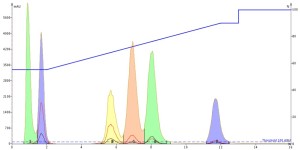 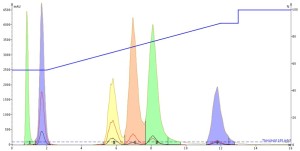 So why do we see these different results?  Let's look at each of the solvents.

Based just on this information I wonder if the dissolution solvent's polarity and/or relative acidity is playing a role?  Let's look further.

In the course of my research I uncovered the fact that both DMSO and DMF have highly negative octanol-water partition coefficients (Log P) values.  The more negative the Log P value the more polar the solvent.  With DMSO, the Log P is -2.03[1], with DMF it is -1.01[2]; both very low and water soluble.  If you compare these values to those of the other dissolution solvents (MeOH, MeCN, acetone) you find methanol has a Log P of -0.77[3], acetonitrile has a Log P of -0.54[4], and acetone has a Log P of -0.24[5] - all quite a bit more lipophilic than DMF and DMSO. So, based on this data I surmise the Log P plays an important role in the separation possibly by minimizing the initial bandspreading that occurs with liquid injections.

I look forward to your feedback on this topic.  Please share your thoughts and ideas for future posts.

If you'd like to learn more specifics about how to be successful in flash chromatography, read my latest white paper here.