Why is Solvent Evaluation by TLC Important for Good Flash Chromatography Results?

Organic chemistry can be messy with not only the desired compound created but also myriad by-products. As synthetic chemists, our goal is to make these desired compounds in sufficient yield and purity to either create another compound or submit for evaluation by other departments. To purify these reaction mixtures, flash chromatography is the primary technique.

But flash chromatography is not as simple as attaching a column to an automated flash system, loading the sample, creating a 0-100% gradient, and pressing play. Some method development should be done in order to determine the best solvents and elution gradient for your synthetic sample as 0-100% ethyl acetate in hexane may not always give the desired results.

Those familiar with my other posts know that I am a proponent of using thin-layer chromatography (TLC) to scout different solvents and solvent blends in order to maximize the separation and, therefore, load and desired compound purity. Without rehashing my previous posts on this topic, I will provide some basic tenets on why evaluating solvents for the flash chromatography method by TLC is something chemists should always do.

I know this seems like it is a lot of effort, but really it is not. For me, I will usually evaluate three polar modifiers with hexane – ethyl acetate, acetone, and methyl t-butyl ether. These have similar strength (0.43 – 0.5) but span only two selectivity classes – Group 1 (MTBE) and Group 6 (EtOAc and acetone). Acetone is stronger than EtOAc (0.5 vs. 0.43) but does provide different optical properties than EtOAc in regard to UV detection – EtOAc absorbs UV below 252 nm whereas acetone is fairly UV transparent below 230 nm. MTBE is UV transparent across all UV wavelengths but can alter the elution order/spacing of the sample’s components which can be very helpful.

In this post I show the purification results from these different solvent gradients. 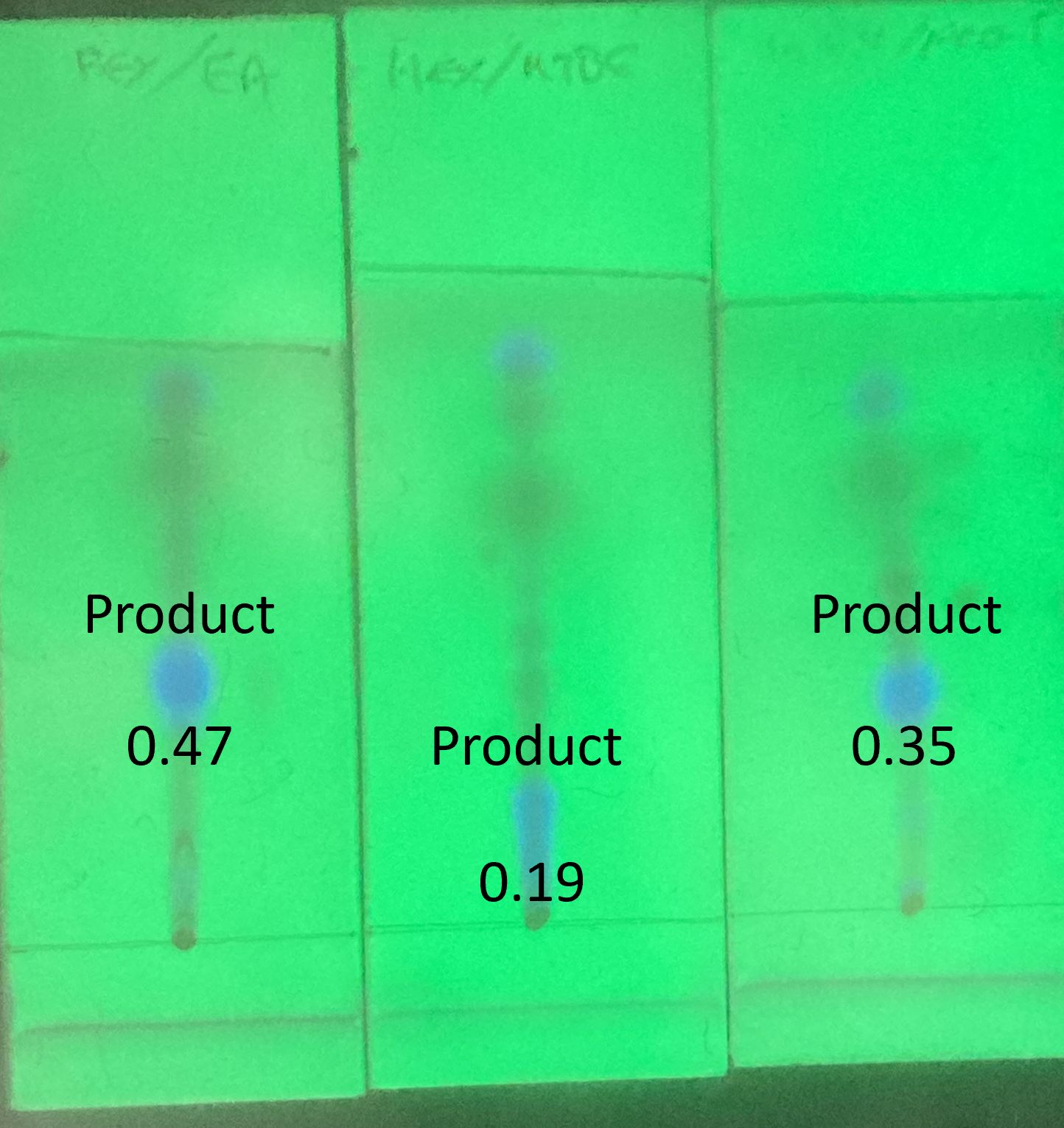 As can be seen with the TLC data, the fluorescent product’s Rf value changes with the polar solvent ranging from 0.19 (MTBE) to 0.47 (EtOAc).

Based on the TLC solvent ratio, linear gradients of 7-60% over 10 column volumes (CV) were created with each of the solvent blends for use with 10-gram Biotage® Sfär HC columns. The flash chromatography results show that while all three gradients purified the product, there is a discernable, closely eluting impurity eluting behind the product peak in the ethyl acetate gradient but well separated using the MTBE method, Figure 2.

Figure 2. Flash chromatography results using the different polar solvents separate the target product (tallest peak) from the by-products. The trailing by-product eluting after the target is not seen with the acetone method.

Mass analysis of each purification's target product shows the presence of an extra mass in the acetone purified product which is the by-product separated by both the ethyl acetate and MTBE gradients. This co-elution occurred because of acetone's strength causing all compounds to elute earlier than with the other two solvents. 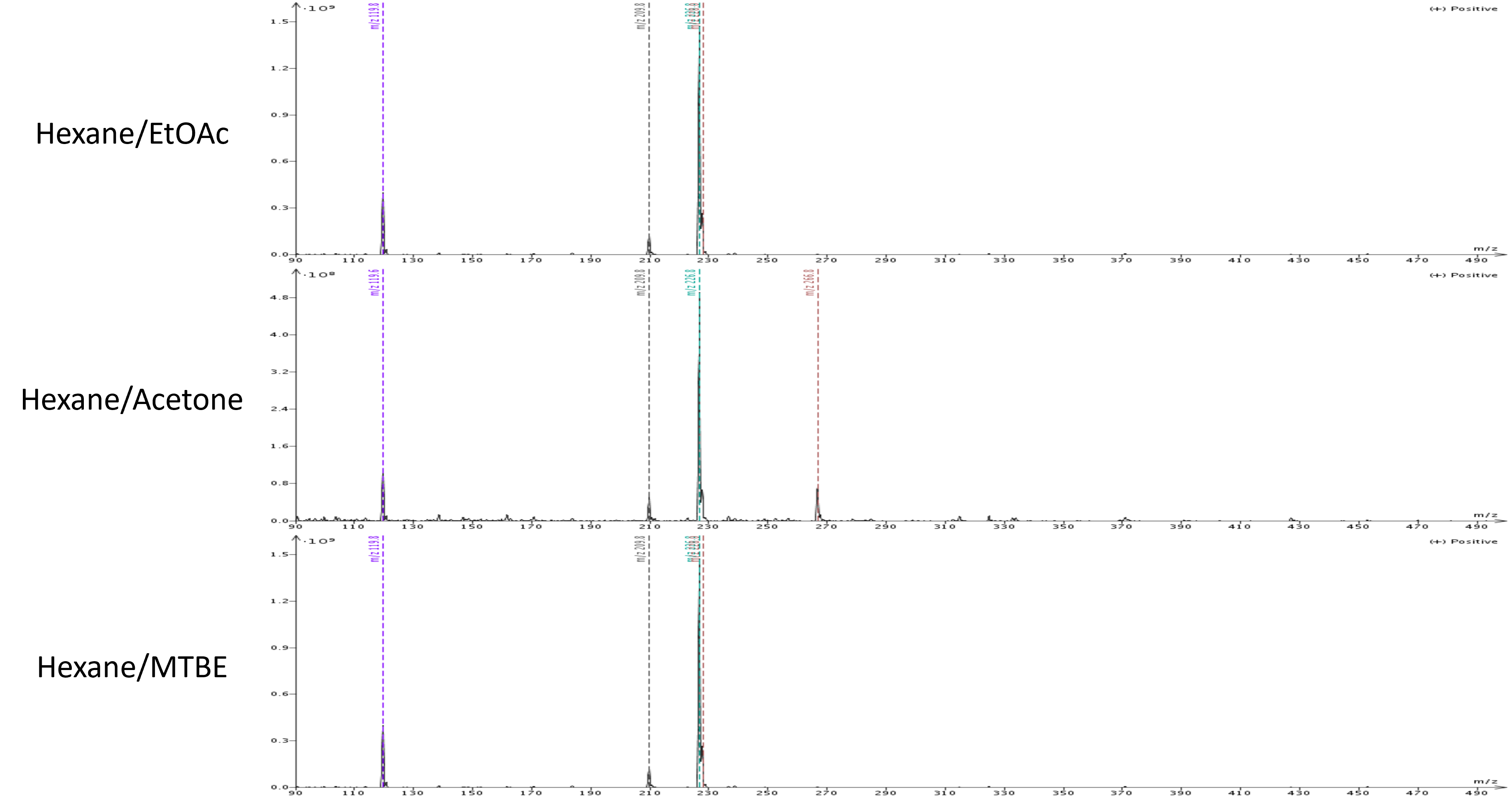 Figure 3. Target product mass analysis showing the presence of an unwanted by-product in the hexane/acetone chromatogram.

So, you can see from this example how evaluating several solvents can provide a pathway to the best possible purification method. This is just one example of the benefits achievable when various solvents from different selectivity groups are evaluated by TLC and used for flash purification.

For more information on flash chromatography, check out our whitepaper Successful Flash Chromatography.