There are many factors which influence successful flash column chromatography. One of those factors is sample load, which itself is influenced by things like selectivity, efficiency, dissolution solvent, and load technique. Several of these factors I have addressed in previous posts. Of these, selectivity and efficiency are specific to a media's physical and chemical characteristics.

In this post I will show if particle size and/or particle shape can influence loading capacity.  Additionally, I will show the positive impact that surface area has on flash column chromatography purification.

In the beginning times of flash chromatography there was only irregular (aka granular) silica and chemists around the world were generally pleased with the results.  W. Clark Still, in his seminal paper on flash chromatography (1978), found that 40-63 µm silica with 60Å pores worked best for his purification needs.  As flash chromatography became more popular in the labs of organic and medicinal chemists, entrepreneurial companies started commercial production of prefilled glass and disposable polypropylene columns with the same particle size silica.

Over time, however, the need arose for silica with better separating power and increased loading capacity.  To address this need, disposable columns with smaller particles of the same or similar silica became available.  This change did increase the separating power and loading capacity compared to the original 40-63 µm (Figures 1 and 2) but at the cost of higher backpressure when operating at the same flow rate and with the same solvents. 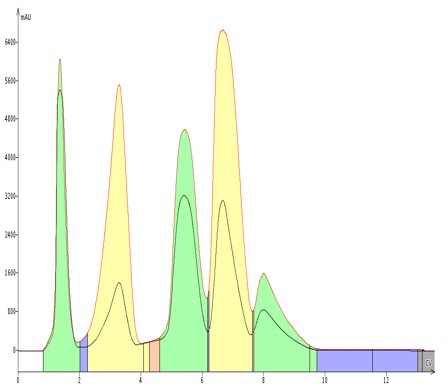 Figure 1.  Separation of 2 grams of a 5-component mixture on a granular, 40-63 μm silica column (50 gram size) shows an incomplete separation of the last three compounds. 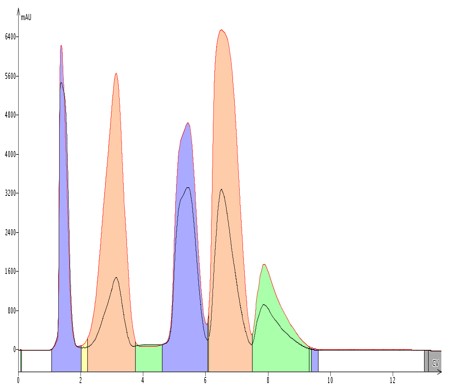 In the chromatograms above, a “standard” 40-63 µm granular silica-filled 50 gram column and a column packed with 50 grams of a finer “high-performance” granular 15-40 µm silica were used to separate 2 grams of a multi-component mixture.  Column dimensions, mobile phase gradient, and flow rates were identical and the 15-40 µm cartridge did provide an improved separation and, therefore, an inferred increase in loading capacity. 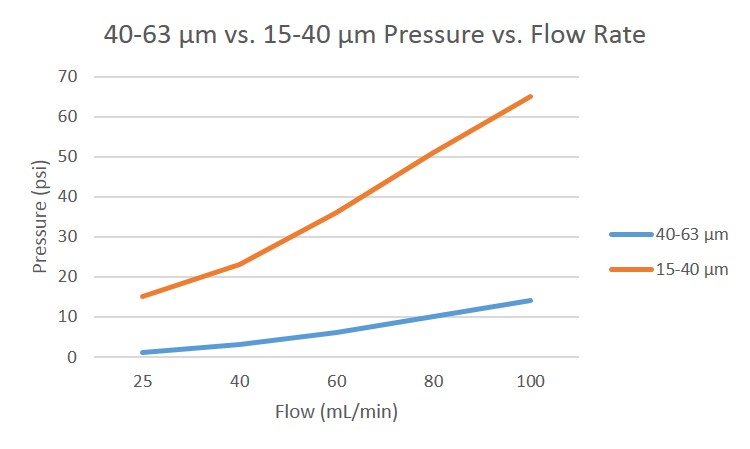 Figure 3. Pressure vs. flow graph for granular 40-63 μm and granular 15-40 μm silica in 25 gram columns shows a considerably larger back pressure for the smaller particle media.

As can be seen in the calculation for resolution (Rs) below the influence of efficiency (N) is based on its one fourth of its square root. Selectivity (α), however, is directly proportional to resolution so it has the biggest impact on resolution and therefore on loading capacity.

So, in order to increase loading capacity you need to improve selectivity, which may be possible with a change in elution solvents or stationary phase.  If that is not possible then improve separation efficiency by moving to a smaller particle media.

There is a way chemists can enjoy the benefits of faster purification (without sacrificing purity);  when spherical silica particles are used.  Spherical shaped particles pack more uniformly into the columns which can slightly improve peak shape and resolution while generating lower backpressure.

Granular silica columns often have “pockets” of dead space where there is no silica. These pockets allow solvent and sample components to become trapped and pool which causes bandspreading and reduced resolution (eddy effect).  Generally though, the physical shape of the particle influences pressure more than it does the actual chromatography, Figure 4. 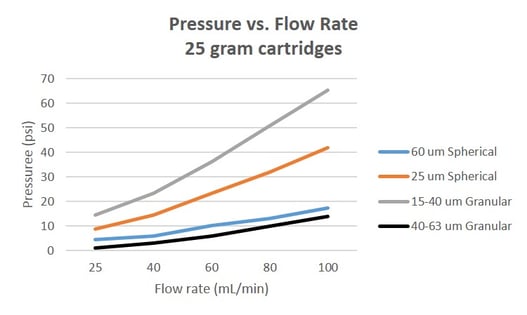 To help show the performance differences, or lack there of, between granular and spherical silica, two different commercially available 12-gram high-performance flash columns, one with granular silica and the other with spherical silica, were used with the same elution method to separate 200 mg of a 5-component mix, Figure 5. Because the media and columns are from different vendors, compound retention is different but the ability to separate the compounds, especially the last three, has not been influenced by particle shape.

It is the silica surface area that impacts load more so than its shape.  Figure 6 shows how an increase in surface area impacts sample load and the resulting chromatography. 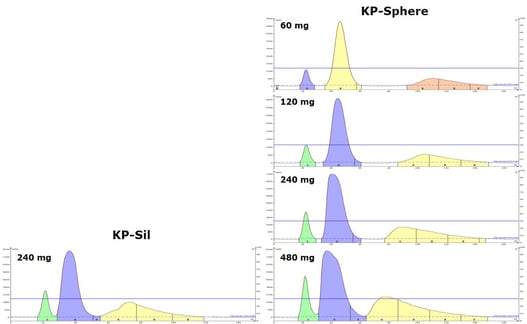 In the data above, the spherical silica (Biotage® KP-Sphere) has a similar particle size (60 µm) as the granular silica (40-63 µm) but because its surface area is 50% greater (750 m2/g vs. 500 m2/g), it is able to accommodate a higher sample load without separation loss or increase in back pressure.

Figure 7. A 200 mg purification on a 750 m2/g surface area, 25 µm 10-gram Biotage® SNAP Ultra column. This silica's increased surface area and smaller particle size provide a better separation with higher loading capacity than either of the 12-gram cartridges in Figure 5.

So, the bottom line is changing particle size will alter loading capacity but a switch from granular to spherical will only change back pressure. To obtain the best performance use a high surface area spherical silica and you will maximize load and minimize backpressure.

Have you evaluated spherical silica columns?  Share your experiences with us.