How can I perform normal-phase and reversed-phase column chromatography on one flash system?

But, if you have only one flash system available, can you, should you, and how do you efficiently switch from non-polar, normal-phase solvents to polar, reversed-phase solvents – and back again without issues? In this post I'll attempt to shed some light on the topic.

Drastic solvent polarity switching on a chromatographic system is a process shunned by most chemists.  Why? Because there are fears of residual solvents that can possibly interfere with the next chromatography run and there are concerns about the impact of drastic polarity changes on the system's fluidic components, especially pump seals and check valves.  These are real issues and for most labs, they would prefer to have two flash systems – one for normal-phase and one dedicated to reversed-phase, rather than switch solvents.

Though the issues are real, you can efficiently switch between normal- and reversed-phase just by flushing/priming the system with a series of miscible solvents. This can be done quickly, typically in under one minute, without negatively impacting the system.  I have done this many times with Biotage® SPx, Isolera, and now the Selekt systems with great results and no fluidics issues!

To switch from normal- (hexane/ethyl acetate) to reversed-phase (methanol or acetonitrile and water) – prime the system (without a column attached) with 50-100 mL of ethyl acetate, then methanol (or acetonitrile), then water for the same volumes.

To switch from reversed- to normal-phase – prime with methanol (or acetonitrile) followed by ethyl acetate and then hexane, all between 50 to 100 mL.

For most flash systems, the above solvent switching is a manual operation.  With the new Selekt system this process is now automated, which is really convenient. It is designed with two, independent flow paths and therefore can be used for both normal-and reversed-phase chromatography.  The system understands that water is a reversed-phase solvent so when you program a purification method one of the two channels with water as a solvent, the Selekt system will automatically perform the solvent switching for you.  The same is true when performing a normal-phase purification after a reversed-phase run.

This is a system capability I find most beneficial as I can now quickly evaluate whether a purification is best performed by normal- or reversed-phase methods without interrupting my workflow to manually switch solvents.

Sorry if this sounds like a sales pitch, it is not intended that way but when I come across a truly unique and beneficial product, I like to share the information.

I had the opportunity to test this capability with a reaction that created a very messy mixture, Figure 1.

normal-phase TLC (2 plates) in 20% and 30% EtOAc/hexane proved once again my apparent limitations as an organic chemist (that’s why I practice chromatography!). I used two EtOAc/hexane ratios to determine which provides the better separation of both the raw, crude reaction mixture that I know would streak but provide information on complexity, and a diluted crude to simplify the TLC analysis, Figure 2. 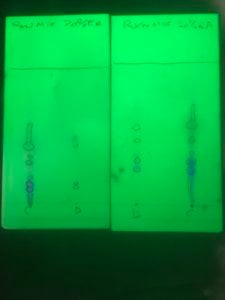 From the TLC data, I actually created a step gradient on the Biotage® Selekt system, which provided an excellent separation with a 10 gram, 20 µm, Biotage® Sfär column, and a load of 90 mg,  Figure 3.

On channel 2 of the Selekt system I programmed a 50-100% MeOH in water reversed-phase gradient using a 12 gram Biotage® SNAP Ultra C18 flash column. Once I pressed the play button, the Selekt system flushed the internal plumbing with the needed solvents at 300 mL/min and automatically began equilibrating the C18 column.  The resulting chromatography of an identical 90 mg load was quite good, even though I did not optimize the gradient, Figure 4.

Figure 4. Reversed-phase purification of the reaction mixture (90 mg load) shows a good separation using a non-optimized method. The product is the green peak.

So, can you, should you switch solvents on your flash system in order to perform normal- and reversed-phase flash chromatography?  In my experience you should.