How many times can I reuse my reversed-phase flash column?

The number of reversed-phase column uses does not have a cut and dry answer. Like with many other chromatography questions I am asked, there are many variables to consider including…

Solvents typically will not cause column issues unless they are contaminated or contain harmful additives. I typically use ACS grade solvents and deionized water (tap water should never be used). Since reversed-phase columns are covalently bonded, solvents will not cause hydrolysis or other harm to the media.

Most methods use either methanol or acetonitrile with water but THF and acetone, as well as ethanol and IPA can also be used as organic modifier. However, the organic solvent choice will greatly influence operating pressure which can be a concern, Figure 1. 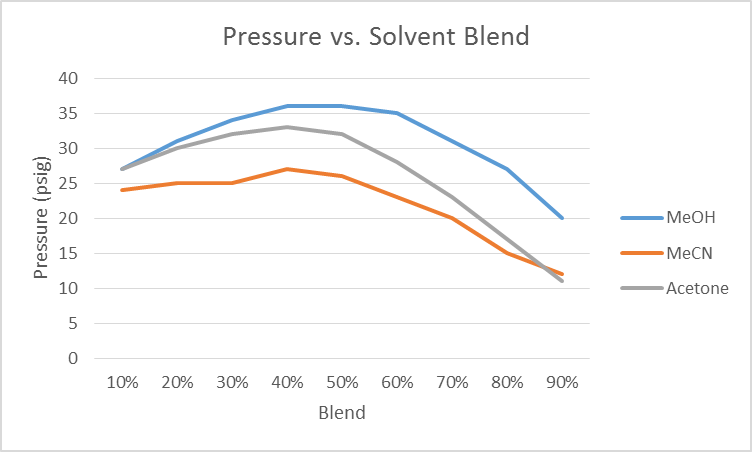 Though flash column frit porosity is larger than with HPLC, sample filtration can help increase column life. Having complete sample solubility prior to injection is important to column life but so is solubility in the elution solvents. With flash chromatography akin to preparative chromatography, sample loads are high relative to column media weight which increases chances of compound precipitation, especially if the sample is loaded as a solution. To diminish chances of compound precipitation during sample load or during purification, the use of dry loading is strongly recommended.

If precipitation does occur, flash columns can be gently back-flushed with solvents of increasing strength – water-methanol-acetonitrile-acetone-dichloromethane – followed by decreasing strength.

Mobile phase pH is the biggest contributor to premature column demise. Most reversed-phase media have a pH tolerance between 2 and 8 though some, with advanced bonding chemistry, are capable of short-duration use at pH 10 or 11, e.g. Biotage® Sfär C18.

Acidic solvents are used when sample components require protonization but if the pH is less than 2, it can hydrolyze the bonded phase from silica, which will cause compounds to elute earlier and potentially be misshaped as the mass transfer kinetics have changed.

For maximum column life, flush the column with neat solvents prior to storage.

Some applications require buffers to mediate pH and/or ionic strength. The problems arise when buffers are used in concentrations too high to maintain solubility in the mobile phase, leading to salt precipitation and column overpressure. Inorganic salts should not be used because of this problem. It is best not to exceed 500 mM, if possible, of organic buffers such as ammonium acetate, ammonium formate, and ammonium bicarbonate.

As with pH modifiers, all buffers need to be flushed from the column before storage.

Reversed-phase column media, being hydrophobic, prefer organic solvents for use and storage. Personally, I store my columns either in 100%, methanol or acetonitrile in order to eliminate potential bacterial growth with can occur in the presence of water.

With continued use column backpressure can increase over time. This can be due to a number of things but typically it is particulates plugging the upper frit or media pores. Backflushing can sometimes alleviate the issue.

So, if all of these variables are controlled and the column not otherwise misused (e.g. dropped on the hard lab floor), there is no reason your reversed-phase flash column won’t last 25, 50, even 100 uses. Even off-colored media is not a concern unless you notice changes in peak shape, product purity or recovery. I have columns with various shades of brown and one that is green, which are still working well.

More reversed-phase flash chromatography information can be found below.