So, with that in mind, let's take a look at the use of acetone in place of acetonitrile as a reversed-phase flash chromatography solvent.

Much of the drive to greener flash column chromatography purifications has been focused on replacing toxic organic solvents and on reducing solvent consumption.  The result of either approach is greener chemistry through reductions in toxic waste generation. This has been especially true as applied to the purification of organic synthesis reaction mixtures.

Reversed-phase flash chromatography  is gaining acceptance in organic, medicinal, polymer, and natural products chemistry labs.  The need to monitor its cost and safety are becoming more important as a result. Commonly used reversed-phase solvents include water with organic solvents such as methanol or acetonitrile – each have advantages and disadvantages.

While methanol is quite cheap (~$10/L), mixtures with water can generate problems such as high backpressures and slow mass-transfer kinetics. When methanol is blended with water the mobile phase temperature rises (mixing water and methanol is exothermic) and the overall volume contracts (1 mL of water + 1 mL of methanol does not equal 2 mL!). What happens is the dissolved oxygen in the water, and to a lesser extent methanol, is liberated which causes the volume contraction.  During a water-methanol gradient this “outgassing” is seen as bubbles eluting from the flash cartridge and also in the form of pressure fluctuations.  It is the pressure fluctuations that generate noisy baselines.

Acetonitrile, on the other hand, is typically the solvent of choice in HPLC due to its lower viscosity when blended with water, broader UV transparency range, and improved baseline noise. The biggest drawback to acetonitrile? Price and availability.  Acetonitrile is toxic and quite expensive at >$40/L. Furthermore, it has often been difficult to obtain. So, it is not usually the first choice for preparative scale liquid chromatography.

Acetone is a solvent that no one ever talks about in regards to reversed-phase flash chromatography. Like methanol and acetonitrile, acetone is water soluble.  Mixtures with water have lower viscosity than methanol meaning less flow resistance at faster flow rates, Figure 1. 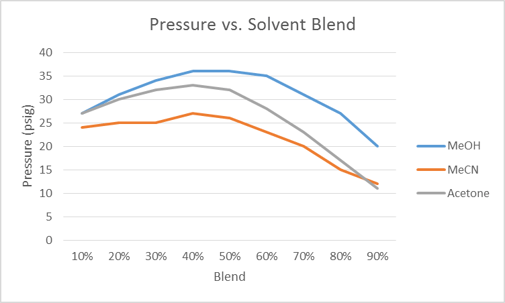 Figure 1. A graph of the pressure generated as various solvents are blended with water. A 12 g Biotage® SNAP Ultra C18 was used at a flow rate of 25 mL/min.

Acetone is also much less expensive than acetonitrile and can be obtained at a lower price than methanol (I saw acetone at a price of ~$8.60/L).  Its major disadvantages are its reactivity with amines and strong UV absorption between 220 nm and 320 nm.  However, some modern flash chromatography systems now offer real-time baseline correction to compensate for the UV absorption of the solvents thus enabling acetone, and other UV absorbing solvents, to be used in flash purification methods.

How do these solvents compare chromatographically? Quite similarly, at least with the sample mix I used. I have found methanol and acetone to provide almost identical selectivity though less acetone is required (it is a stronger reversed-phase solvent than methanol), Figure 2.

Figure 2. A comparison of the chromatography obtained when using methanol (top chromatogram) and acetone in reversed-phase flash chromatography. Less acetone is required but the separations are nearly identical. Eluting peaks with acetone are sharper.

Acetonitrile provided a bit better selectivity for one pair of compounds (peaks 3 and 4) but less selectivity for another (peaks 1 and 2) using the same gradient profile, Figure 3.

So, how does all of this impact the greenness of reversed-phase? Well, if you currently use acetonitrile-water gradients for reversed-phase take a look at a direct replacement with acetone.  You may find comparable purification with a lower-priced, less toxic solvent – very green!

If you use methanol-water gradients you should be able to reduce the amount of organic solvent, which will in turn reduce purification costs.


Either way you win by making reversed-phase chromatography greener.

If green chromatography is interesting and you want to learn more, watch our webinar - Green Flash Chromatography.