Applying green chemistry principals to flash purification is becoming increasingly important.  In this post, I discuss ways to make flash column chromatography greener by reducing solvent use through optimization of gradient shape.

This is a follow-on to my earlier post where I presented some greener alternatives to DCM as a solvent in flash column chromatography.

Consider for a moment that, a single compound in a reaction mix is most commonly the target for purification and isolation. While this is true, most commercially available flash chromatography systems apply a broad range gradient.  This approach simplifies set up of a gradient at the cost of using solvent to unnecessarily purify undesirable, non-target compounds.  The thinking is that  it is simpler to just run a 0-100% gradient without knowing where that single, valuable, targeted molecule will elute.  Then perform some post-separation analysis with TLC or LC-MS to find the compound among the collected fractions. 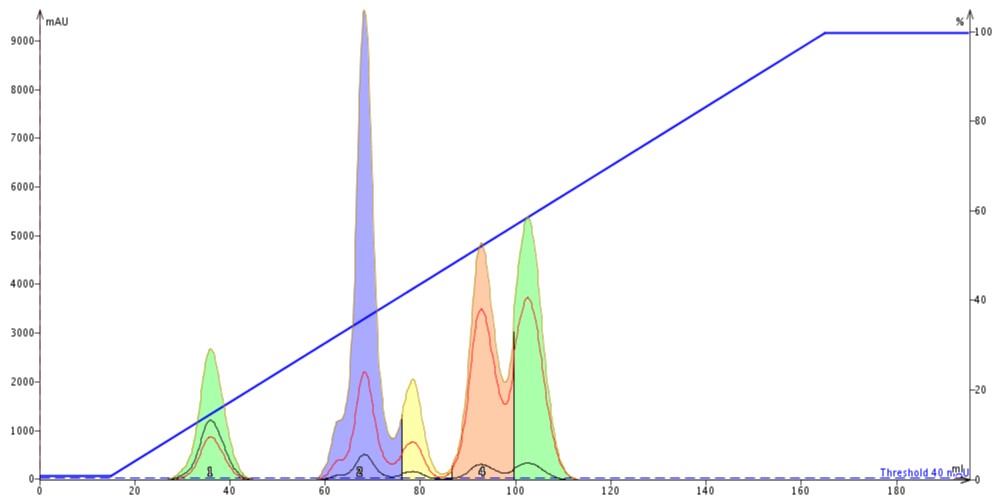 Figure 1. This inefficient, generic 0-100% gradient elutes all of the mixture's compounds but the separation quality is poor. Fraction purity is low, except for peak 1, and the amount of solvent not used in the separation (used after the last peak) is considerable (~45% of the total volume!). Very wasteful.

Personally, I do not believe guesswork and assumption is good practice in terms of chromatography so I always use TLC to guide my purification method creation, something I discussed in previous posts. As a chemist, you know that every compound you synthesize is valuable and unique (otherwise you would buy it) so why would you leave its purification to chance with a wasteful, inefficient gradient?

While many flash chromatography manufactures do have TLC to gradient features built into their systems, these too can often consume more solvent than necessary to elute and separate the reaction mixture components, Figure 2.

Figure 2. Linear gradient results created from TLC data are much more efficient than default 0-100% gradients.  In this case, 100 mg of the same mix is fully separated on a 10 gram silica cartridge.  This gradient also used 13 column volumes (CV) or 195 mL, the same volume as the default gradient.  However, even this linear gradient wastes some solvent, 3 CV (45 mL), after the last peak eluted.

The "non-productive" solvent volume that elutes after the last compound is relatively inconsequential for an individual, small-scale run but most of us are performing several purifications per week throughout the year; this all adds up to a lot of consumed solvent that needs disposal and that reality does put a burden on the environment as most of the solvents are burned.

So then, how do you make your flash chromatography methods more efficient in terms of solvent and therefore greener without sacrificing fraction purity?  Well, I recommend flash method optimization with some tips described below.

The classic approach to flash column chromatography is for a chemist to prepare a silica filled glass column, load the mixture to be purified onto the top of the column, begin the separation with a non- or low-polarity solvent blend (hexane/ethyl acetate).  Once the early eluting compounds are collected, the chemist increases the polarity of the solvent blend to elute the more retained compounds.  This process is repeated in a step-wise manner until all compounds are eluted.

This labor intensive approach, can be mimicked by using a predicted  step gradient but without the need to attend to the separation.  Step gradients can easily be created to optimize the separation of each compound in a mixture.  They typically use a minimal amount of solvent, provide maximum load, and reduce run time - a purification trifecta, if you will. I previously discussed this approach which, when using a Biotage Isolera™ Spektra system, requires only two TLC plates’ data.

An example of an efficient step gradient based on data from just two TLC runs, one in 10% EtOAc and the other in 30% EtOAc is shown in Figure 3. The resulting chromatogram shows that each compound is fully resolved on a 10 gram Biotage® SNAP KP-Sil column. Each compound elutes within about 2 CV at each gradient step which minimizes the amount of solvent used. The entire run is accomplished in only 11 CV with minimal "wasted" solvent. I also want to let you know that this step gradient provided twice the sample load of the linear gradient - 200 mg vs. 100 mg - which is also green because of the potential to reduce column size and therefore solvent consumption.

Figure 3. This TLC-based step gradient completely separated all five components in just 165 mL using an identical 10 gram silica cartridge at a load of 200 mg.  This much more efficient step gradient reduced solvent consumption by 35 mL versus the linear gradient and provided twice the sample load! Very efficient and greener.

Another good approach to reduce solvent use (and purification time) is to convert a linear gradient, which has separated your target product well from its impurities, to a step gradient also focused on your product. This technique targets a single compound in the mix and anything eluting before your product will be separated from it while compounds more retained either elute later or may even stay on the column. This approach is very effective when scaling up a purification, Figure 4.

Both of these step gradient approaches, I have found, greatly reduce solvent consumption without sacrificing load or purity, which is extremely useful if  looking to reduce solvent waste and when scaling up or purifying on a large column.

If you implement these gradient optimization steps you will make a major impact on making your lab, and employer, greener than they are today and that’s a good thing!