How to isolate impurities from a reaction product

Ensuring that the product of a reaction is pure is critical to that compound’s viability as a marketable entity. Impurities often require characterization if they are in excess of regulated limits. The isolation of these compounds can be quite challenging.

When a reaction mixture or natural product extract is purified by flash chromatography there are sometimes impurities found in the isolated target compound. This can often be attributed to selectivity challenges (compound-sorbent-solvent), column overload, or improper injection technique (too strong of a sample solvent).

While flash chromatography is a technique designed to remove the majority of reaction by-products from the reaction’s target compound, typically an intermediate, it is often used for final product purification. When a purified target compound’s analysis show the presence of co-eluting by-products, then the product requires re-processing, typically using chromatography, to clean it.

One of the most popular approaches to clean the product is orthogonal chromatography where a chromatographic parameter affecting selectivity is changed. This can be a change in column media, media brand, solvents, and/or temperature (Webster & Kott, 2020). These changes are considered orthogonal to the original purification method.

I have previously posted on the benefits taking an orthogonal approach to flash chromatography can provide. I will show some examples of how changing selectivity improves the flash chromatographic separation of some reaction mixtures and natural products.

A solvent change can have dramatic effects in both normal- and reversed-phase chromatography. In normal-phase, purification methods can be improved by selecting one or more solvents from different selectivity groups, Figure 1.

Figure 1. Normal-phase flash chromatography of a reaction with a single by-product using a DCM/MeOH gradient (top), a DCM/MeCN gradient (middle), and a hexane/EtOAc/IPA gradient (bottom). In each run one or more solvents from differing selectivity groups were used.

Solvent selectivity also impacts reversed-phase separations. Differences in polarity and acidity play roles in both reversed-phase and normal-phase flash chromatography. In the example below, a change in organic solvent from MeOH to MeCN provided a partial separation of co-eluting terpenoid compounds, Figure 2.

Figure 2. Natural product purification using reversed-phase generated different results based on the solvents used. MeOH/H2O did not separate the two major components (top) but changing to MeCN/H2O provided at least a partial separation.

Changing media, especially between normal- and reversed-phase methods, is a proven way to dramatically alter chromatographic selectivity. There are major differences in the surface polarity thus requiring different solvents and, therefore, providing different selectivity. A good example is shown in Figure 3 where a reaction mixture was purified first using normal-phase with a Biotage® Isolera Dalton 2000 that found several co-eluting by-products (+m/z+H 372.8 and 314.8) in the product peak (+m/z+H 226.6). 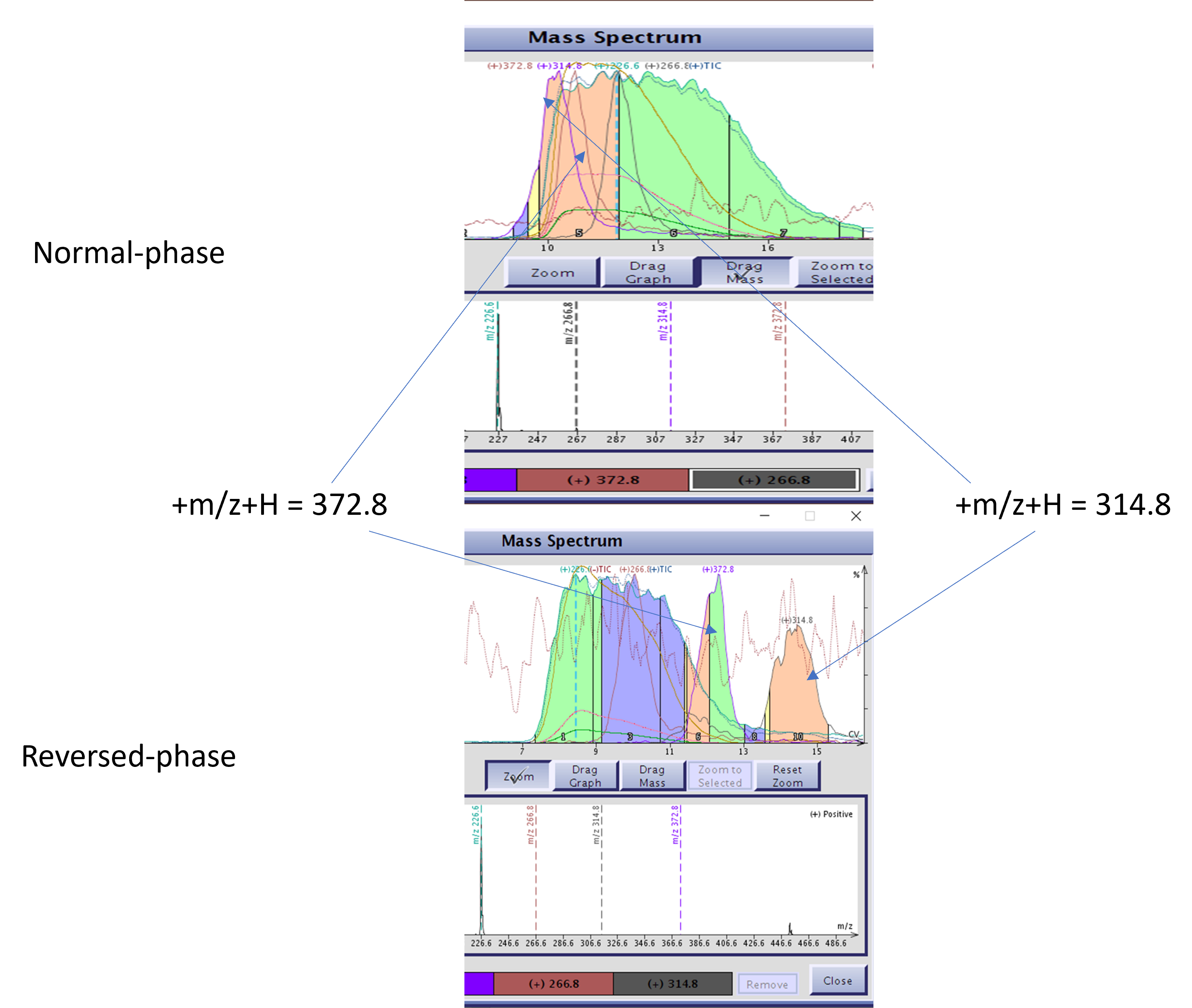 The product containing fractions were combined, dried, then re-purified using reversed-phase which successfully removed the two contaminants (372.8 and 314.8).

So, when you find that your purified product still has some contamination, consider re-purification using either different solvents or different media. A little bit more effort can provide much improved results.

Interested in learning more about flash chromatography? Check out some of my other blogs.