When is Gradient Elution Better than Isocratic Elution?

Gradient or isocratic elution, that is the question. Within flash chromatography these are the options afforded to separate reaction mixtures and natural product extracts and is the focus of this post.

For those unfamiliar with the terminology, isocratic elution means that the mobile phase solvent blend used to perform the purification maintains the same ratio of weak (e.g. hexane) and strong (e.g. ethyl acetate) solvents throughout the chromatography. If you use thin-layer chromatography (TLC) as the basis for your flash chromatography, an isocratic purification would use the same solvent ratio as that used with the TLC.

There are actually two types of gradients, linear and step, and they have their own advantages that I’ll discuss later.

As mentioned, isocratic flash chromatography uses a constant solvent blend to separate and elute a sample’s components. Isocratic elution is simple but does have some drawbacks, the greatest being band-broadening. As the crude sample migrates through the column, compounds with increasing affinity for the column media (stationary phase) elute more slowly than compounds with a greater affinity for the mobile phase. Since compounds migrate through the column as a concentration band, the longer it takes for a compound to elute from the column, the more solvent is required which increases the compound’s elution volume. Think of this as a dilution effect which is seen as elution band-broadening, Figure 1.

By changing mobile phase elution strength during the purification, later eluting compounds’ solubility in the mobile phase increases and expedites their elution. In doing so, these compounds’ elution bands sharpen, which increases their concentration and decreases band-broadening. As an added benefit, often the amount of separation between eluting compounds improves, thus providing higher purity fractions.

There are two types of gradients that are frequently used, linear and step. With linear gradients, the change in solvent ratio increases in a linear fashion expediting the elution of the compounds with greater stationary phase affinity and improving the separation, Figure 2. 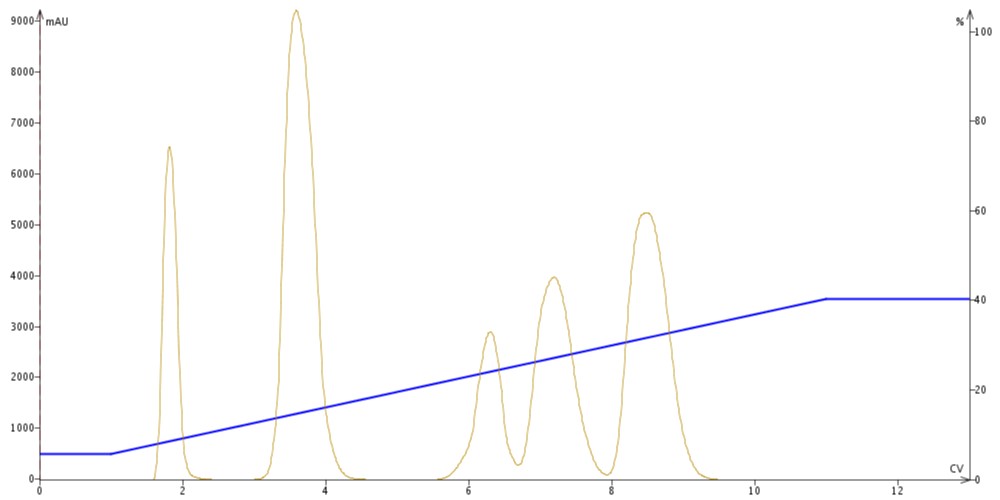 A step gradient, on the other hand, is built with a series of isocratic steps (think stairs). Each consecutive step is a different solvent ratio containing a higher percentage of strong solvent, Figure 3. The idea behind step gradients is to control individual compound elution as much as possible in an effort to maximize the separation between compounds. Also, a frequent added benefit of step gradients is a reduction in the amount of solvent required to perform the purification.

Figure 3. A series of individual steps helps to improve and maximize compound separation while minimizing band-broadening.

So, what we can see is that gradient elution, whether linear or step, improves flash chromatography efficiency and performance compared to isocratic elution.