How can I modify my flash chromatography method to separate chemically similar compounds?

The challenges organic, medicinal, and natural product chemists face are many: from designing reactions, to optimizing synthesis, work-up / extraction, and purification / isolation of the desired compound or compounds. Among those issues related to purification / isolation is the common problem of separating compounds with similar chemistry that either co-elute or separate poorly.

In this post I will discuss some tips on how to "resolve" this issue (yes, pun intended).

In some previous posts I have discussed strategies and tactics designed with optimizing separations of ionic / ionizable compounds, organic amines, and other hard-to-separate mixtures, each requiring some different purification approaches.

In some ways, dealing with ionic / ionizable compounds or organic amines is "easier" because, by and large, you know what you are dealing with and can adjust pH and / or buffer content to get the desired result.  The more challenging situations occur when your need to separate / purify structurally similar compounds or compounds with similar hydrophobicity / polarity.  In these cases, a combination of changes may be in order.

I have encountered this with both polar and non-polar sample compounds in normal- and reversed-phase purifications.  These situations can be tricky as it is often difficult to understand why a separation is poor and then how to improve it. In these situations you should consider:

In one case I used TLC with DCM / 10% MeOH to separate a sample with three components including butyl paraben, methyl paraben, and 4-methyl-4(5)-nitroimidazole. Although they separated by TLC in this solvent mixture (Figure 1), they did not separate fully during the subsequent flash purification step (yielded only two peaks), Figure 2. 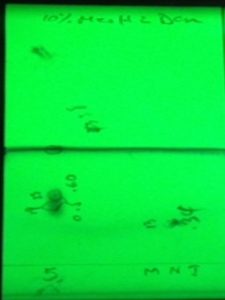 Figure 2. DCM-MeOH purification of butyl paraben, methyl paraben and 4-methyl-4(5)-nitroimidazole. Due to methanol's strong polarity the two parabens co-elute even though there was separation using TLC.

The parabens are structurally similar differing by only the ester size and both containing a hydroxyl group in the para position. So, in an attempt to get a separation, I replaced methanol (a very strong displacing solvent in normal-phase) with aprotic acetonitrile, which then allowed the parabens to separate on TLC as well as with flash chromatography, Figures 3 and 4. 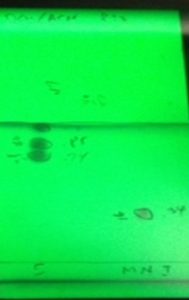 Figure 4. DCM-ACN gradient purification of butyl paraben, methyl paraben and 4-methyl-4(5)-nitroimidazole. The paraben separation is due to the replacement of methanol, a protic solvent, with acetonitrile, an aprotic solvent.

In another previous post, I discussed a purification challenge that required me to incorporate a third organic solvent into my binary gradient in order to separate some co-eluting compounds from other closely-eluting neighbors.  In this case I was trying to separate and isolate terpenoids in lavender oil using a mass detector to find and fractionate the compounds. What I found was one compound with a detected m/z of 203 would co-elute with at least one other mass-detectable terpenoid regardless of the binary mobile phase, either hexane/ethyl acetate or hexane/DCM.

The commercially available lavender oil I used (brand Aura Cacia) came from the species Lavendula angustifolia and contains many terpenes and terpenoids. From research, I discovered the most prevalent mass-detectable (oxygen-containing) terpenoids in lavender are linalool and linalyl acetate¹.  Other terpenoids typically found in lavender in relatively high abundance include borneol, caryophyllene oxide, geraniol, terpineol, and carvomenthenol, Figure 5.

Figure 5. Some common terpenoids found in lavender. Based on various isoprene unit forms and with similar hydrophobicity, these compounds can be challenging to separate.

So, to try and improve the separation, I weakened the gradient by replacing ethyl acetate with DCM. To get the major compounds to separate I found a gradient of 20-100% DCM worked but, both borneol and caryophyllene oxide co-eluted with linalool, Figure 7. 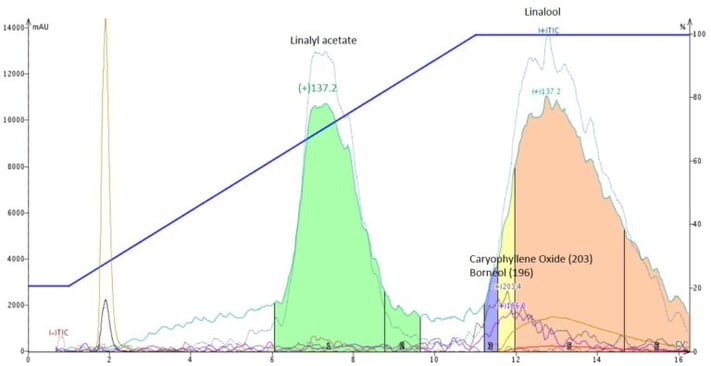 Since both borneol and caryophyllene oxide retention and selectivity change when the strong solvent (EtOAc or DCM) changes, I created a method incorporating all three in an effort them to separate from each other and the other terpenoids. After some trial runs, I settled on a step gradient of 0-10% DCM with a 2% EtOAc modifier added isocratically by my Biotage® Isolera Dalton 2000 system.  This "ternary" gradient provided a complete separation of linalyl acetate (separated as two peaks - isomers?), caryophyllene oxide, and linalool with borneol partially resolved from linalyl acetate, Figure 8. 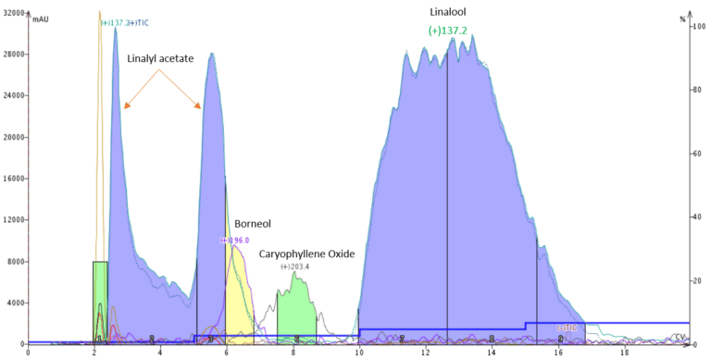 So, by experimenting with different mobile phases and eventually adding a third solvent, I was able to separate caryophyllene oxide from borneol, linalyl acetate, and linalool.

It is interesting that linalyl acetate splits into two peaks.  It does exist as enantiomers in nature.  Could this mobile phase and flash cartridge (Biotage® ZIP-Sphere 5 gram) actually be separating enantiomers? Chromatography of pure linalyl acetate does the same thing. Sounds like I need to perform a bit more research...

How have you addressed challenging purifications such as these? Please, let us know.

For more information on flash method development and optimization, click on this link and register.

Also, please take our survey regarding this blog; I'd love to see your thoughts.

¹Turgur, A. C., et al. Chemical Characterization of Lavandula angustifolia Mill. as a Phytocosmetic Species and Investigation of its Antimicrobial Effect
in Cosmetic Products. JOTCSA 2017, 4(1): 283-298.